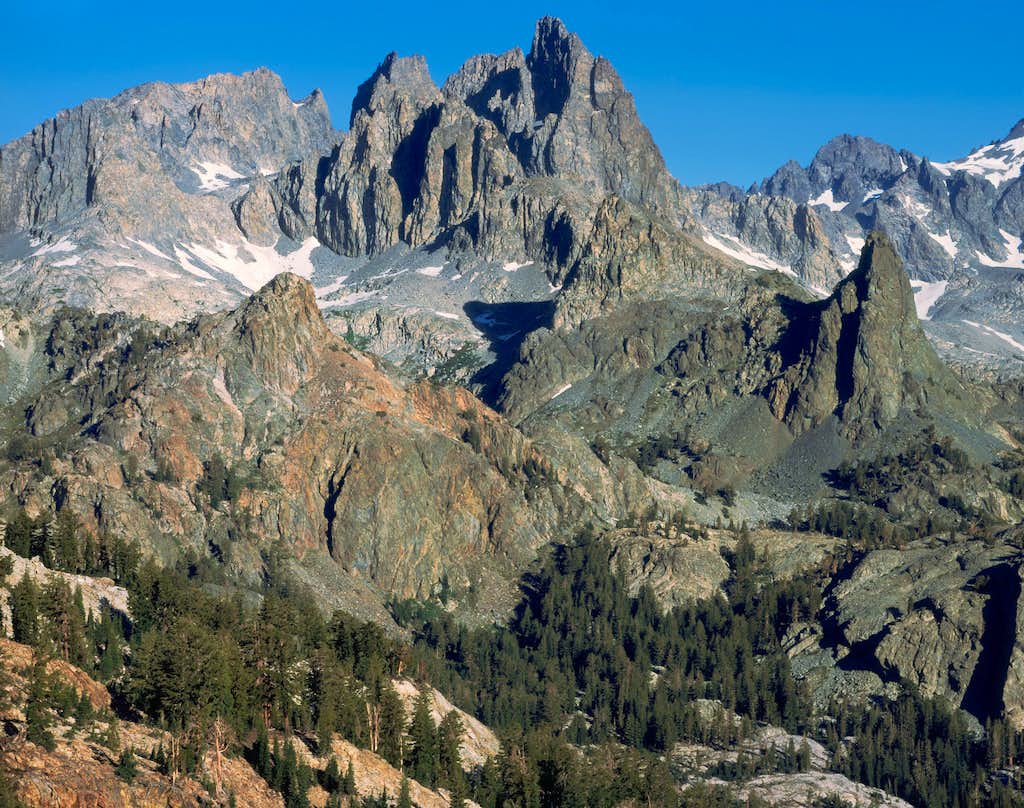 ...mouse click to hugely enlarge... A sheet of 4x5 Provia 100F transparency film exposed with my view camera 300mm Nikor lens about 8 am on August 8, 2010 from the ridge north of Superior Lake. Referencing below to the Mount Ritter USGS 7.5m topo. This crude 800ppi from my flatbed scanner was carefully adjusted so color matches my transparency, then was downsized 20% to a 3000 pixel width for this trivial usage and not a high resolution 2400ppi drum scan. Peak 3908m, (12821) the highest topographic point in this frame is on the skyline frame right with the shoulder of Mount Ritter at frame edge. The more dark dirty yellow geology of pointy Rigelhuth Minaret, 10695+, is directly below. Minaret Lake would be behind Rigelhuth and below. Highest against the sky in this frame just right of frame center is Clyde Minaret, 12263. To its right below the skyline and just left of Rigelhuth sporting somewhat rusty rock is part of the erete that is Turner Minaret. Kerlein Minaret, 11876+, is the prominent peak against the sky to the left of Clyde. The top of Pridham Minaret, 11614+ is directly below its top and blends in unless one is viewing the larger image. Just to the left of Kerlein against the sky is point 3640+m (11942+) that on the topo is just west of the north end of the unseen ice pond, Amphitheatre Lake. Below to the left of Pridham is the class 2 ice axe route of South Notch 11,417+. The notch in this downsized image is deceiving as it is actually a blend of South Notch plus the slope leading up to the ice pond that is mostly occluded. Notice how large talus blocks on the South Notch slope contrast against the more distant snowfield and hides a lower intervening slope continuing up to the ice pond. Starr Minaret, 11319, is to the left of South Notch though blends in with the rib west of Amphitheatre Lake. Note the prominent shadowy ice axe gully below and to its right above a snowfield that shows on the topo to the right of the "N" in RANGE. In midground, the very rusty metavolcanic knob, topo point 3203m, (10508) noses into that snowfield. Deadhorse Lake is unseen in front of it below. The forest below left is dominated by mountain hemlock and includes lodgepole pine. A quite pleasant lonely zone I've often base camped at. Above on the ridges hemlock is joined with some whitebark pine. On many of the talus slopes one can see short green patches of willow. David Senesac http://www.davidsenesac.com
« PREV NEXT »

Thanks for taking a look at the big image. Honored to be included as you have an excellent aesthetic eye reflected in your fine album.