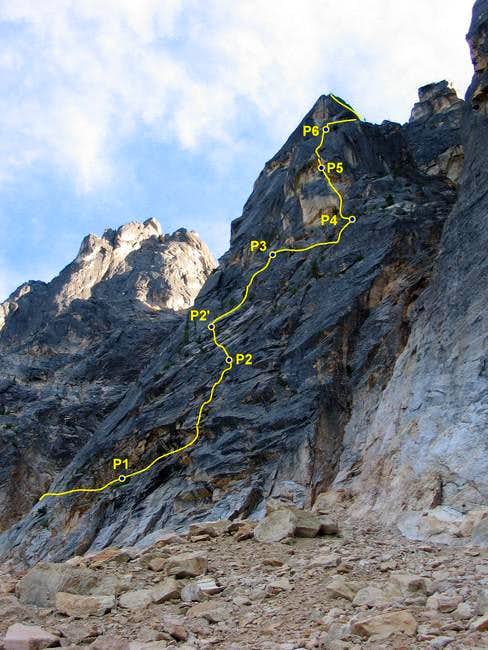 Minuteman's east face with the East Face route (III 5.10) as we did it - many interpretations possible on lower apron (up to P4) and P5 has a chimney variation described on Eric's East Face page. In this photo, pitches 1 through 2' (there's P2 and P2' as we had some route finding issues but I want to keep pitch numbering consistent with Nelson and Potterfield) are very roughly drawn in (hard to recognize what's what from this angle). Pitch 1 lower half is out of photo as it starts in a clean dihedral on extreme left side of east face. P3 line is probably pretty accurate (want to take a crack system left of prominent dirty chimney/gully in center of east face - not visible in this angle) as is P4. P5 and P6 are accurately drawn with P5 being the crux at 5.10 (but P6 is no push-over either with its opening roof/flake pull I'd guess at about 5.9?). Photo taken on afternoon after our climb of East Face on August 7, 2005.
« PREV NEXT »

Great set of photos. If I wasn't so greedy I'd hand the mtn. page over to you! Thanks for making the page worthwhile. -Eric

THank you very much Eric!

No you should DEFINITELY hold on to this page. You've done a great job with it.