The nice ridge Mišelj vrh - Mišeljski Konec is a wonderful one day tour in the vicinity of Triglav. While masses are attempting the highest mountain of Julian Alps, you scramble over the panoramic ridge in a perfect solitude.

The whole ridge tour would actually mean ascending first on Koštrunovec, the eastern fore-summit of Mišelj vrh, then climbing (easy, UIAA I) on Mišelj vrh and continuing towards the west on the highest point, and finally descending od Hribarice plateau (UIAA II). That's much more difficult. As I haven't done the ascent from Koštrunovec on Mišelj vrh, and also not the last part, I will describe the tour using the normal ascent on Mišelj vrh.

The ridge, seen from Mišelj vrh

The tour can be done also from any of the nearby valleys, but then it becomes very long. In fact its distinct part really starts on Velo polje or Vodnikov dom (hut). See the main page of Mišelj vrh how to reach Velo polje (meadow). If you come from the valley, you need to Vodnikov dom (hut) some 2 h 30 min (from Pokljuka) up to 4 h (from valleys). 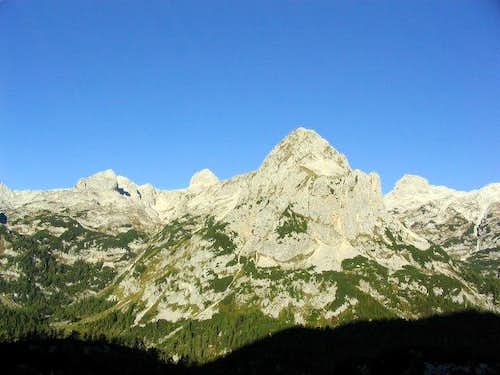 damjan - On the left is Mišeljska dolina from which you first ascend Mišelj vrh, then continue on Mišeljski konec and perhaps descend again in the upper part of the valley.
Ascent. From Vodnikov dom (hut) you descend on the flat meadow of Velo polje and continue by the marked path towards the SW on Malo polje and further on to Mišeljska planina (meadow), 1700 m. There you turn towards the NW, the path into Mišeljska dolina (valley) is not marked, but in the beginning well traceable. Later the path turns towards the western direction. Soon after reaching the lowest part of the valley, we must deter right from the path. Over the southern slopes of Mišelj vrh we hardly follow a tiny path. In the middle part we reach an unpleasant scree slope. It is wise to keep low, because rubble is not so fine there. So, we are gaining altitude, going towards the left. Above, we see the main ridge and aim our ascent towards the lowest point or just right of it (to shorten the ascent). The last part below the ridge is a steep grassy slope, which can be tricky if wet. When reaching the main ridge, we are surprised by the fine view on the other side - Triglav is very close. We turn right and follow the ridge to the highest point. Just below the summit we need to scramble a little. The ridge is also quite narrow and exposed there, but with some care will not make any difficulties. 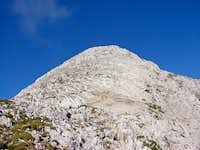 Rafa Bartolome - The final part of the ascent on Mišeljski konec
From Mišelj vrh we see Mišeljski konec on the western side - at the end of the long ridge which connect the two summits. To continue the whole ridge traverse we return towards the west to the point where we gained the ridge. From there, we continue by the ridge towards te west. The hike is nice, panoramic and easy. We shall cross the unimportant grassy bump of Na Nizkem, 2275 m, hardly even noticing it and so approach rthe more rugged Mišeljska glava, 2273 m, which is also not difficult. After it, on the Point 2244 m, the ridge becomes more sharp, so it is wise to avoid it by crossing its southern slopes. So we reach a saddle before Point 2344 m. Crossing this one is even a bit harder. That is why it's really better to cross over its southern slopes, below the summit wall. There is only some easy climbing (degree I) and scrambling, while crossing by the ridge meand overcoming some places of UIAA II. We also shouldn't lose too much heigth, finally reaching the saddle below Mišeljski konec. The final summit slope is then steep, but easy enough. From Mišelj vrh to Mišeljski konec we need some 2 h. 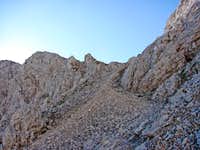 Rafa Bartolome - The descent into Velska dolina
Descent. A direct descent from Mišeljski konec on Hribarice is possible, but not recommendable, unless you know exactly where it goes. In a descent it is not so easy to find the best passage (it follows a steep ravine, filled with rubble), which anyway requires climbing of UIAA II degree (or rapelling). If you would really want to do it, it is better to do the route from Hribarice to Mišeljski konec in an ascent, so doing the whole tour in the opposite direction.

For non-climbers the two possible descents from Mišeljski konec are into Velska dolina (towards the north) and into Mišeljska dolina (towards the south). The descent to Velska dolina is actually the normal and most used route on Mišeljski konec. It is also short. We descend towards the east on the saddle below Mišeljski konec, there turn left and by steep scree and rocky slope soon reach the marked path down in Velska dolina (valley). The southern descent is not much harder. From the same saddle we go right and descend by steep grassy slopes, carefully choosing passages (we may encounter some easy climbing of UIAA I). When reaching Mišeljska dolina (valley), there's still no path. The valley is remote and very nice, we simply go down towards the east, finally descending on Mišeljska planina - to the nice shepherds huts and further on Velo polje.