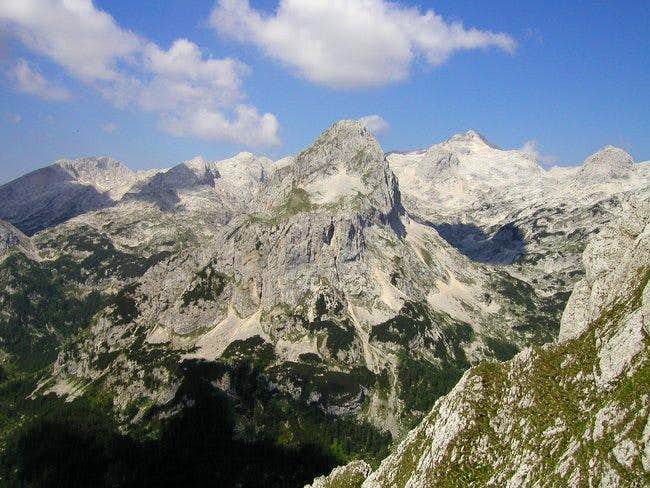 The nice overview photo of mountains in the nearness of Miselj vrh from the east side.

Miselj vrh is a very important mountain in the nearness of Triglav. If you look from Triglav is the first mountain in the small ridge, which is located in the W-E way. It is constituted from the main summit (2350m), on the east side is a small peak Kostrunovec (2102m), on the west side is a long ridge, which ends on the last mountain called Miseljski Konec (2484m) before the ridge falls to the Hribarice pass (2358m). On this ridge are some other not very important peaks: Na Nizkem (2275m), Miseljska glava (2273m) and some other unnamed mountains.

The photos of Miselj vrh on other pages.

On the north side of Miselj vrh is nice valley Velska dolina, where is very popular route for tour skiing. The description you can read here. From the summit of Miselj vrh falls down on the plateau Velo polje nice ridge where is one of the possibility for reaching Miselj vrh. On the west side it is connected with long ridge to the Miseljski Konec. Somewhere in the middle comes from the south side on the ridge the normal approach on the Miselj vrh. Then you reach the main summit over the west ridge. On the south side Miselj vrh falls down over the south slopes and face to the Miseljska dolina. On the other side rises up to the north side another powerful mountain Skednjovec (2309m).

I think is the view on Triglav from the south side the best from Miselj vrh. You can see the column of climbers on the ferattas on Triglav very clearly. You are standing alone on the top pf Miselj vrh and look on the Triglav where are some hundred climbers.

In Bohinj valley we arrive by car, bus or train from Bled (by train also from Gorizia).

From the main Bohinj valley (Stara Fuzina village) we can drive by car towards north into Voje valley. After 2 km there's a crossroad, where we take the left forrest road. It takes us through Suha valley to Planina Blato (alpine pasture), 1147m. There's a big parking place. In summer, the road through Suha valley needs to be paid.

The other possibilty is also Krma valley. If you come to climb on Miselj vrh from Krma valley you drive from Mojstrana in Sava valley to the end of road in Krma valley. Now the trailhead is on the altitude of about 1100m.

If you come from east side from Vodnikov hut you can ascend hut from the Pokljuka plateau.

You come to the plateau Pokljuka from the Bled or from the Bohinj valley. With car you drive to the barracks on the Rudno polje. From Bled is 22 kilometers. On the barracks is a signpost with inscription Triglav. We follow that road to the small skiing area where we park by first ski lift. Then you walk to the Vodnikov hut on nice very popular marked route. You don`t have any problems with orientaion.

On the east ridge you must climb some parts around UIAA I-II but on the west ridge you only scramble over some steeper slopes.

There is possible to climb in north face and east face of Miselj vrh but I don`t have any information about that. 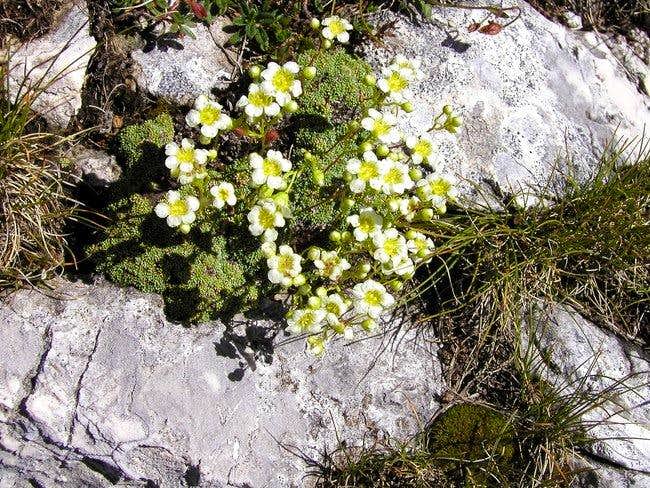 No limitations but Miselj vrh is located in the Triglavski Narodni park so you must be kind to the nature and other beauties.

The best time for climbing on Miselji vrh is Spring and Autumn. In the Summer is too hot.

The best time for skiing are in all Winter and Spring but not when there is dangerous for avalanches.

In the nearness of Miselh vrh are many huts.

Trzaska koca na Dolicu (2151m) (Trieste Hut on Dolic) stands on the Dolic pass, between Kanjavec (2568m) and Triglav (2864m). First object was built by Italians in 1930. Renewed hut was reopened in 1948 but destroyed by avalanche in 1951. In 1952 they began to build new hut on a safer place, few hundred meters away. New hut was opened in 1953 and was named Trzaska Koca (Trieste hut) because Slovenians living in Trieste, Italy, always wanted to have hut close to Triglav. In 1973 in was enlarged. It is open from the end June till beginning of October. It has 144 beds, cold water and power generator. View from the hut is beautiful on the peaks behind the Trenta valley.

Dom Planika pod Triglavom (2401m) (Planika Hut Below Triglav) stands on the high plateau Ledine, below southern cliffs of Triglav (2864m). It has long history. First hut was opened in 1871. It changed names and was resized and renewed few times, last time in 1987, when second object was erected new to old hut. It is open from end of June till end of September. It has 74 beds in main object and dozens more in new one, cold water and power generator. View from the hut is very wide towards east and south.