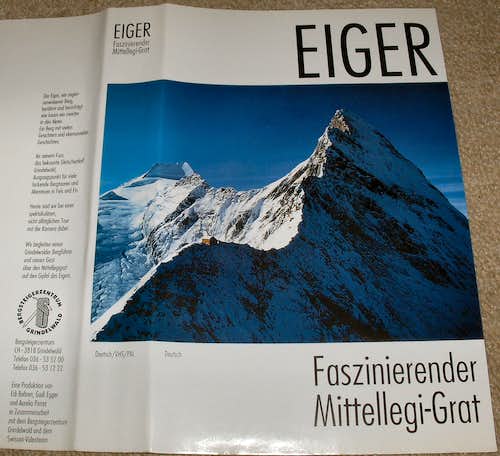 Video film about an ascent of the Eiger by the Mittellegigrat. Samuel Brawand tells the story of the first ascent in 1921. Note the Hut.

The Mittellegi Hut at 3355 m is beautifully situated on the knife edge sharp Mittellegigrat 615 m under the summit of the Eiger, the famous Bernese Oberland mountain. The hut offers two of the most breathtaking views in the Alps, to the north side green pastoral landscapes with the village Grindelwald far below, and to the south side massive glaciers and mountains. The Mittellegigrat was first ascended 10 September 1921 by the Japanese Yoko Maki together with the three local guides Fritz Amatter, Samuel Brawand, and Fritz Steuri.

Maki donated a sum of 10.000 Franken for a hut to be built near the place where they spent the night prior to their ascent. The hut built in 1924 had room for 16 persons. A steel pipe bivouac hut was built in 1986 a few meters from the old hut offering room for further 14 persons. In 2001 after 77 years the first Mittellegi Hut was replaced by a new larger hut with 40 beds. The old hut was moved to a location close to the railway station Eigergletscher and now serves as a small museum. Since 1995 the Mittellegi Hut has a resident guardian during July and August. Typically (as in the summer 2003) over 700 climbers stay overnight before making an attempt on the Mittellegigrat the next day.

The Eiger page provides overall information on how to get there. A dark and icy tunnel leads from the Eismeer station at 3160m on Jungfrau railway out to the Fieschergletscher on the south side of the Eiger. Turn left and pass the sérac area and continue up the snow slope along the Challifirn to the rocks. Climb the rocks (III-) to the hut. Allow 2-2½ hours. Beware of stonefall all the way. The hut can also be reached from the north by a longer and more difficult route (D). Other alternatives are via the Bergli Hut or the new Ostegg Hut.

Pictures of the route from the tunnel (by RolandJ, 2007) 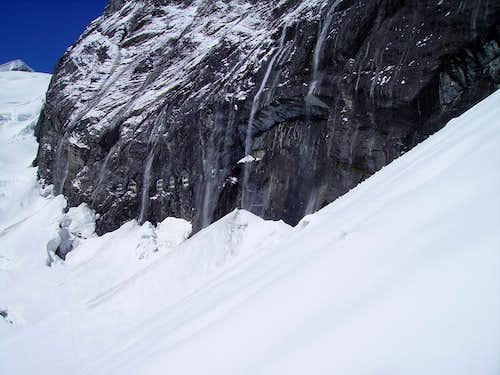 Snow melting in streams over the Eismeer windows. 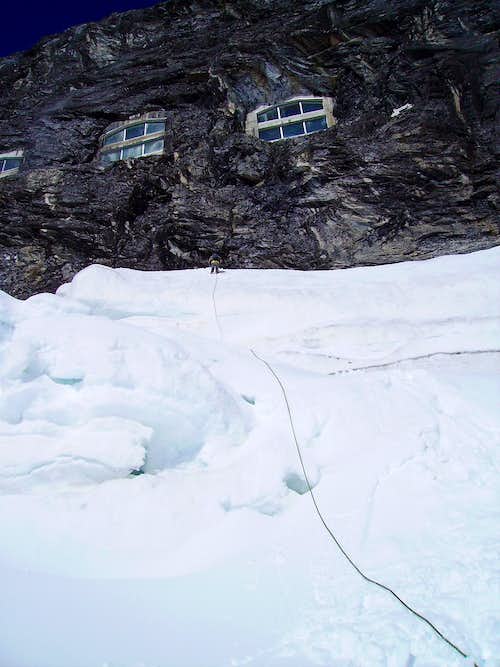 Abseil from the tunnel door below Eismeer station. 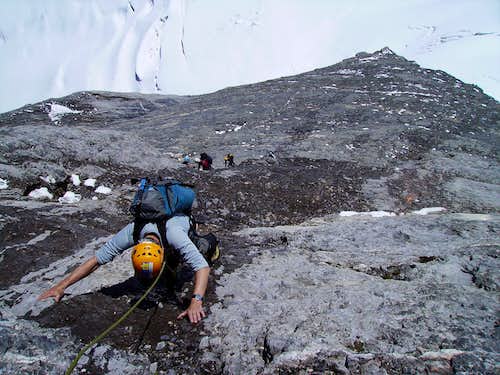 Climbing the slabs direct to the Mittellegi Hut.

Round the clock live camera: