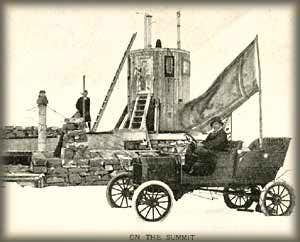 In 1911 Henry Alexander Jr, son of a Ford dealership owner in Edinburgh drove, a 20 horse-power Model T Ford to the top of The Ben as a publicity stunt. The feat involved 10 days of reconnaissance work - finding and checking a drivable route to around half way up the mountain, and placing bridging planks over impassable gullies and streams. It took three further days to drive the car to the halfway point and two more days to cover the rest of the distance to the summit. Alexander was helped by a large support team who would haul to safety whenever the car sank in boggy ground. Which it would do continually on the lower slopes of the mountain, often axle deep. On returing to Fort William, Alexander was hailed a hero, and after only some minor adjustments to the breaks, and no other repairs necessary, he drove the car back to Edinburgh. In 1928 he returned to Ben Nevis' summit, this time in a Standard New Ford (Model A Ford).
« PREV NEXT »

Nice history, Dan. In my opinion, it has
a lot to do with mountains. Because, what
are mountains unless humans are around to
record their history and geology???

I guess they build them nowadays with a
lot more horsepower and petroleum-based
products. I miss those good old days!
Thanks, - Larry

Thanks Larry, I agree the history of mountains is important. Mind you if I cought someone trying to drive a 4x4 up a mountain I'd go nuts!

The only tracks I like to see in the
wilderness are deer and Bighorn sheep -
maybe goats. In America, some people are
very lazy and DRIVE right up the mountain!
I can yell and scream and DANCE a jig, but
it does NO good. You must always consult
the true landowner, and report the
violations immediately. So it goes !!!
- Larry

agreed, those motor vehicles do so much damage. I was up in Snowdonia a couple of summers ago and there were these idiots tearing across the mountain on dirt bikes. They seemed to delight in causing damage. Where I live the council have a complete ban on off-roaders in the mountains - so far it seems to be working.
take it easy
Dan