0. General: From 1611 m to 2333 m, exposition S and E, in normal conditions (if not icy) you need only the usual ski touring equipment. For the whole tour count no more than 4 h, but 7 h if coming up all the way from Kranjska Gora. 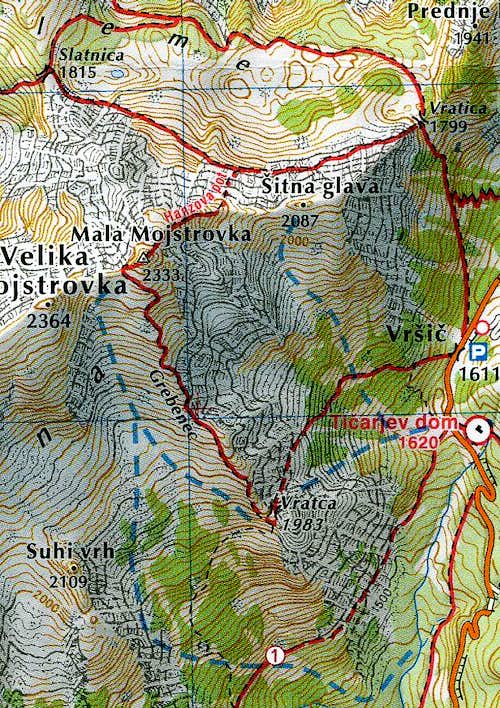 Mojstrovka and its routes

The ski tour from Mala Mojstrovka is one of the most popular ones in Julian Alps. The reason is a fine starting point - the high Vršič pass, 1611 m. In winter and early spring the road is usually not cleaned, but if it is, you can start ascending immediately after you exit your car. If the road is not cleaned you usually need to walk additional up to 2 h from Jasna lake, on the northern side of the pass. 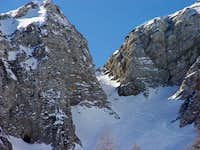 The ascent on Mala Mojstrovka is the same as described in Velebit's summer Southern Route.

From Vršič Pass we go through dwarf pines and then steeply towards the left on the clearly seen notch in Mojstrovka's S ridge - Vratca, 1983 m. The couloir just below the notch is quite steep - some 35-40 degrees, but the ascent is not exposed.

When you reach the S ridge, you continue towards the right by it. In winter it can be steep in some places, but in normal conditions you should due to its southern orientation have no problems with only ski touring equipment. Take care of corniches on the ridge and especially on the summit of Mala Mojstrovka!

When skiing down it is best to keep right (looking down), first towards the saddle below Velika Mojstrovka and then by a beautiful slope down. Some 300 m lower you have to decide - whether to ski over Vratca notch, or to continue down into the so-called Drevesnica. It all depends on snow conditions.

As Mojstrovka's S ridge is often free of snow in the part just above Vratca, you usually have to go some 50 m without skis. Make sure to keep high enough! Continuing by the slopes on the right of the ridge (too low on Trenta side) first looks fine, but soon becomes steep and exposed, and, it is true, brings you on skis just below Vratca notch.

From the notch down everything is clear. First the steep couloir, then the fine slope which brings you directly on Vršič pass. This slope is in heavy snow conditions dangerous for avalanches. To get some impression of their power, do the following: After the ski tour go from Vršič pass up to Tičarjev dom (hut). Imagine there how that house was one winter totally destroyed only by avalanche wind (snow masses didn't reach it), the avalance came down from the slopes of Mojstrovka, on the opposite side of the pass.

The second option is to continue skiing by the fine, broad valley southwards. If snow is not too soft, you'll enjoy skiing to the altitude of some 1550 m, there you hit the marked path and continue by it horizontally towards the left just to Vršič pass. This is an easy variant for less skilled skiers.