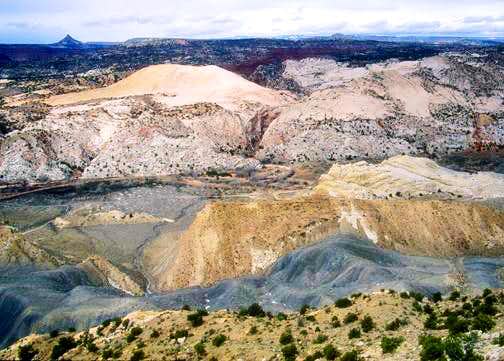 This is looking west from the top of the Cockscomb. A colorful geologic landform near Hackberry Creek, the Cockscomb runs parallel to the Cottonwood Canyon Road inside Grand Staircase Escalante National Monument. MOLLIES NIPPLE makes it's presence known in the distance at an elevation of 7,271 feet. This photo was taken by JIM RIDGE. Doesn't Mollies Nipple look so close that you could reach out & touch it ???
« PREV NEXT »

I have been wanting to get out to that one!

You and me both!

Mollies Nipple is on the top left corner of the photo. The rock that is located south of Hackberry Canyon is known as Yellow Rock. You can see how it received that name.

Right on! 'Scott' didn't give any particular
reason why it's yellow. I have seen "blue clay"
in this area, so I guess anything is possible.

One of the many SP mysteries. Hey, does
ANYBODY know what happened to Tanya of Zion??? (She seems to have disappeared from
the site - just wonderin'). THANKS, Melinda!

I'm not sure why it is yellow. It seems so out of place though. I agree with Scott that it is one of the most colorful mountains that I have seen.

Tanya is probably just busy. Her website has been helpful to me for hiking in Southern Utah.

Yes, I can definitely understand "busy."

I think I've been contributing too much time.
My wife & I will be away from the computer
for some "quality time." Take care of
yourself, and thanks for the information !!!

We finally have time to visit my folks up in
Tooele. Looking forward to the change of
scenery - those RED colors were killing me
softly ... with their song. Cheers ...

visiting Bryce Canyon in 1969 and being surprised to see a mountain called "Mollie's Nipple". Since joining SP I have learned that there are several "Mollie's Nipple" and also a "Fern's Nipple". In France it is quite common to call a little round hill "mamelon" (= nipple), but I have never heard of a mountain in the Alps called that (in any of the languages used there).

That brings me back to my question that nobody answered.

What is the difference between a mount (mont)
and a peak ??? For example, in the US we
have a "Lassen Peak" which is volcanic in
nature, so why aren't all volcanoes called
"peaks?"

I understand a larger bulk of a mountain to
be called a mount such as Mont Rosa or Mont
Blanc, but if a mountain has a "pointed"
summit, does that make it a peak ???

As to your discussion, I believe the French
had an influence on what we actually call
some of the landforms here in America.

In France there are several names for a mountain. The more massive often are "Mont" (e.g Mont Blanc), the pointed ones "Aiguille" (= needle) or "Pic" (= peak, e.g. Aiguille Verte, Pic du Midi), the rounded ones "Dôme" (e.g. Dôme de Goûter), the longer ones sometimes "Barre" (= bar, e.g. Barre des Ecrins"). "Cime" is used a good deal in Southern France (e.g. Cime de la Bonette). Tour (= tower) is also used, (e.g Tour Ronde), as is Rocher (= rock, e.g. Rocher de Roquebrune), or Dent (=tooth, e.g. Dent Blanche). In Auvergne nearly all mountain are "Puy" (e.g. Puy Mary), although they have a "Teton de Venus". And then of course there are quite a few mountains that have a name completely of their own (e.g. La Meije)

If you go to the German- and Italian speaking regions of the Alps, they have their own names of course, some of the Italian names being rather similar to the French (Monte, Cima, Torre). German mountains are often "Spitze" (= point, e.g Wildspitze) or Kogel/Kofel (= mountain in German dialect, e.g. Brochkogel, Langkofel) or, in German-speaking Switzerland especially, "Horn", meaning the same as in English, the most famous being Matterhorn. (Horn is also used in Norway!). All the mountains in the Dachstein group in Austria are "Stein" (= stone).

Yes, agreed the Europeans really had their
act together in the naming of geologic landforms; even though some mountains or peaks may "appear" to defy human logic, in NAME as well as in STRUCTURE.

Populating the arid (dry) landscape (along with mesas) were still "SMALLER" landforms
having a similar appearance.

At the beginning of the nineteenth century,
the word butte (BYOOT) was coined from the French word meaning mound or hillock to describe these solitary landforms.

So, if you look at America's Southwest,
you can see the European influence in many
of the names of landforms and waterways.