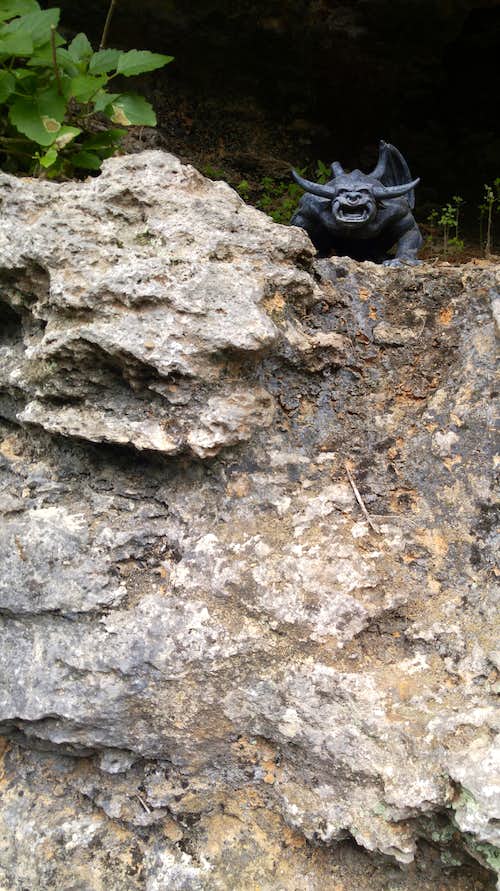 The Monster of Monster Rock-- This guy will surprise you your first time on a couple of the routes here!
This is a nice little climbing spot about 45 minutes west of Austin.
The name itself is cool. If you're into fantasy and sci-fi, though, especially if you ever enjoyed (or still do) Tolkien, Lovecraft, and Dungeons and Dragons, then you're going to find the route names even cooler.
With three main walls having routes ranging from 5.6 to 5.12, Monster Rock has something for everyone. All routes are either sport or toprope. Because two of the walls are the facing sides of a narrow canyon that one often can stem (called the Pit Fiend Pit), the developers here placed bolts on Pit routes closer together than one will find on most other area sport routes; this was to help prevent swings into the opposite walls (and potentially onto other climbers).
Consequently, the closer bolt spacing in the Pit makes the routes friendly for new leaders, and it gives climbers more confidence when leading at their limit. I've confidently led Pit routes at grades that get in my head at most other places.
Since the Pit is so narrow, it is advisable to wear helmets even though many sport climbers seem to think helmets are unnecessary.
The Pit doesn't get much sunlight, which makes it a great summer climbing spot. On the other hand, it can take several days to dry out after a rain.
Wooden signs with route names on them sit at the base of most routes, but many of them are weathered so much that they are illegible.
Monster Rock formerly was private property owned by local climber and guidebook author John Hogge. In 2020, he arranged for the Texas Climbers Coalition (TCC) to take ownership, and now it is public land.
Monster Rock site

To get to the climbing, take a trail past the shack and junk mound. It leads to a bridge across a narrow canyon (the Pit). After you cross the "Troll Bridge," you are on an island of rock called Sauron's Tower. Descend two sets of ladders; that will put you by "Earth Elemental Boulder" and the entrance to the Pit.
There are three main walls. All routes have cold-shut anchors.
On the west side of Sauron's Tower, facing the Pedernales River, is a cliff band with Mythology Wall and Lovecraftian Madness Wall. Routes range from 5.7-5.13a. I've only climbed two routes here and can't say much about it.
As one looks into the Pit from its entrance, the wall on the left is Horror Movie Wall. Routes range from 5.9+ to 5.12a. I've so far done only three routes here (5.9+, 5.10a, 5.10b), so I again can't say much.
On the right side of the Pit are Dungeons and Dragons Wall (in the Pit proper) and J.R.R. Tolkien Wall (outside the Pit). This wall gets the most traffic, and I have climbed most of the routes on it, so here they are from left to right:

Read and follow the posted rules.
Play by the rules; don't jeopardize access to this really cool place.

None. You can camp nearby at Pace Bend Park, which has its own fees and rules.