Located in the province of Québec's beautiful Charlevoix region, Mont du Lac des Cygnes is one of the centerpieces of Grands-Jardins National Park. The park is part of the network of protected areas preserved and managed by SÉPAQ (Société des établissements de plein air du Québec). The summit of Mont du Lac-des-Cygnes stands at the rim of the Charlevoix Crater, a 56 km diameter impact crater created over 300 million years ago. The crater extends beneath the Saint Lawrence river and at its center is the Mont des Éboulements (768 m), an uplift formed after the impact of the meteorite. The general shape of the crater can roughly be discerned by looking at topographic maps of the area. Views from the alpine summit of Mont du Lac des Cygnes extend to the Saint Lawrence river and the Lac des Cygnes ("Swan Lake"), after which the mountain is named, can be seen just below the summit. It is thanks to this impact crater that the Charlevoix region is inhabitable today, otherwise the area would be a continuation of the high plateau of the Laurentian Mountains. Approximately 90% of the population of Charlevoix lives in the crater, and the largest towns within the crater are Baie-St-Paul and La Malbaie.

Due to its proximity to Québec City and a relatively easy, well maintained trail (some would say overly maintained), combined with the fantastic views, this is probably one of the most summited mountains in the province of Québec. In the summer months, park naturalists are often present at the summit, giving informative presentations on different aspects of the Charlevoix Crater that are visible. 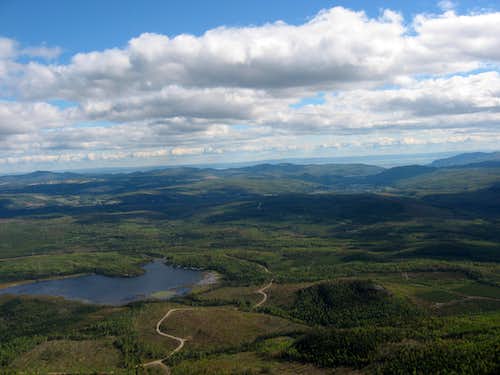 View down to the Lac-des-Cygnes and the Charlevoix Crater

The trailhead for Mont du Lac des Cygnes is at the Grands-Jardins main visitor center on route 381, approximately 1.5 - 2 hours drive northeast of Québec City via route 138. There is a large parking area here, though it can fill up on weekends and parking can spill over to the shoulder of route 381.

The town of Baie-St-Paul, less than a 30 minute drive away, is a popular and convenient base to explore the park and the Charlevoix region for those not wishing to camp. Route 381 is a very scenic drive from Baie-St-Paul, and is quite steep at times. 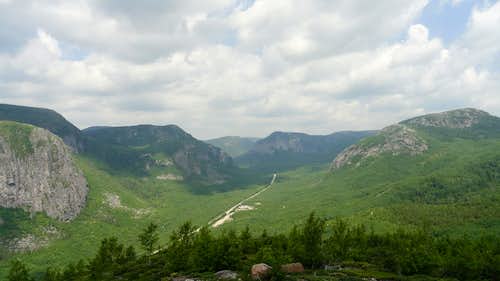 Route 381 climbs through the park

The main 4.2 km trail to Mont du Lac des Cygnes was reworked in 2009. Despite the 500 m elevation gain, the summit is accessible to most people, due to a trail that is highly maintained, nearly to the point of being city park trails. The final approach to the summit includes a long series of stairs making it easy to navigate the steeper part of the mountain. This trail is open year-round and can be a good snow-shoe hike. 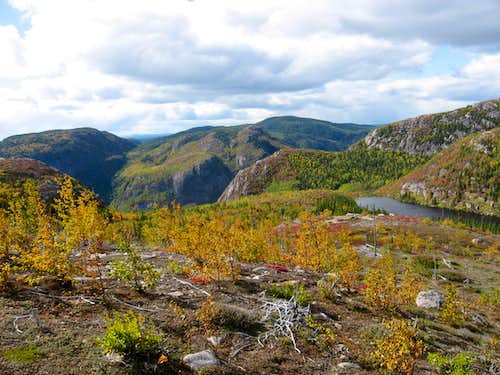 A far more interesting way to hike the mountain is to do a loop via the Pioui trail. This more traditional trail, is open from late June until the first snow. This option will add about 3 km and 200 meters of vertical gain to the ascent, and also reduces foot traffic considerably. The Pioui trail quickly climbs to Lac du Pioui, and shortly after reaches the largely exposed summit plateau of Mont de l'ours. The trail traverses the crest of this peak with paranoramic views of the park until descending the col and rejoining the main trail about 300 m before the summit of Mont du Lac des Cygnes. After summiting, the main trail can be descended in about an hour or so by a reasonably fit hiker. It is also worthwhile to detour to la Chouenne's bald summit during this descent; this will add another 2.5 km and 100 m elevation gain to the trip. 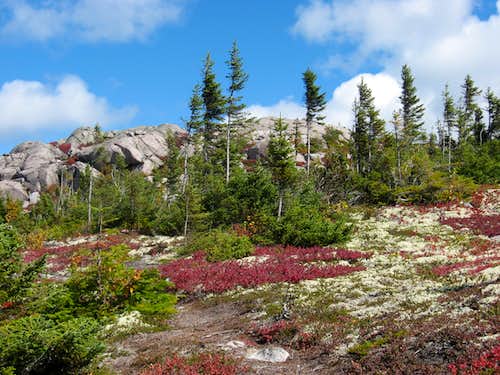 It is worthwhile to hike some of the other trails in the park as well, such as la Pinède, to observe the particularities of the flora of the region. The Grands-Jardins National Park is noted for its Taiga forest, which is unusual at this latitude, due largely to numerous fires over the years, the effects of which are still visible in areas of the park.

Daily adult entrance fee for Grands-Jardins National Park is $8.50 as of 2015.

The main trail to Mont du Lac des Cygnes is open year-round. The Pioui trail, however, is open only from late June until the first snow. Late September / very early October can be a pleasant time when the mountain top is carpeted with red mixing in with the pale colors of lichen while fall foliage is observed in the lower elevations. 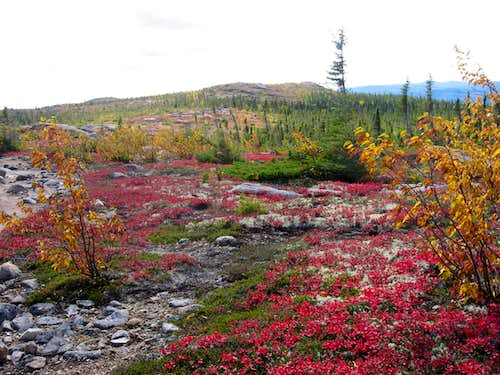 There are several camping options in the park. The closest to the TH is Pied-des-monts, a couple of km down route 381. This is the campground at the lowest elevation and is also the only campground with services such as showers and drinking water. There are other more rustic campgrounds in the park which are quite pleasant. Be advised that these are generally at higher elevations around 700 m; while this may not sound extreme, be prepared for chilly nightime temperatures. There are also cabin options available. Consult the park's website for details.

The website for Grands-Jardins National Park is available in English and French: