This modest page is describing one of the southernmost hills of Massif Central, already quite close to the town of Monpellier and the Mediterranean coast. It is a nice small hiking area, with a very panoramic summit and some very beautiful natural characteristics. When the broad limestone plateaus of Cevennes (called also Causes) finish on the south, also some geological characteristics of those hills change. The mountain itself is made of calcareous and dolomitic rocks and so is the Cirque de Mourèze (the valley of Mourèze), south of it. But on the north, the surrounding of Lac du Salagou is made of the so called "ruffe" rock, formed by the combination of the clay sediments and iron oxides, dated into the Permian period (280 million years back). Iron oxides give the landscape very picturesque red, yellow, orange and brown tones. Cirque de Mourèze and Lac du Salagou together are classified as one of 37 Great Sites of France, environmental protected areas of special interest. Montagne de Liausson itself is a nice hiking destination. I guess the dolomitic rocks on the southern side are not popular with climbers (and may be also not allowed). But hiking paths are fine, well marked and popular. The panorama from the summit is very broad and interesting. On the north the reddish landscape around Lac du Salagou, on all other sides the hilly landscape with some distinct summits, as for example Pic St. Loup, north of Monpellier, or, in nice days, even the summits of Eastern Pyrénées.

The northern panorama of Montagne de Liausson. Below is Lac de Salagou and its picturesque surroundings.

Lac de Salagou
The lake itself is artificial, but due to geologic specifics the surroundings is very beautiful and worth of hiking (or biking along the shore). In addition to clay sediments and iron oxides there are also basaltic flows and fireplaces, indicating ancient volcanic activity. Specific flora adds a lot to the colourfulness and you can also visit a site where fossil footprints can be observed. 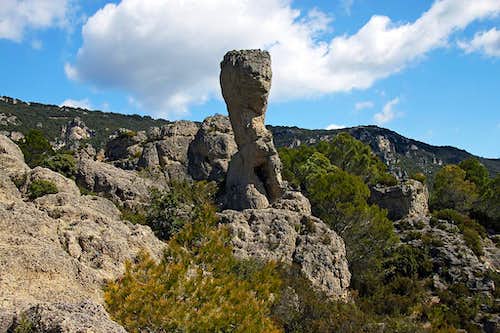 Cirque de Mourèze
This is a shallow and broad valley around and above the village of the same name. For the site picturesque dolomitic rock towers are characteristic. They were formed by erosion - less durable rock masses were washed away by rain and swept away by wind and only more durable rock towers remained. They are a real attraction and they are of all forms. Strange formations have characteristic names, like: le Sphinx, Les Fées, le Lion dressé, le Cèpe, Quasimodo, la Tortue, le Singe, les Amoureux, le Scorpion, le Bison, La Sirène, le Sourcier and others. The place has been inhabited since prehistoric times. It is interesting to learn that the rock labirynth was used for defense purposes and that some rock towers were very likely additionaly carved by people as they served as totems.

Mourèze village
The nearest town is Clermont-l'Hérault, east of the area. There two branches of southern France highways meet - the one coming from Monpellier and the one coming from Béziers. Then the highway runs northwards toward Millau and the central France. From Clermont-l'Hérault you drive towards the west either to Liausson village, lying on the northern slopes of our mountain and just above the lake, or you drive from Clermont-l'Hérault first towards the SW and then W to Mourèze, the village south of the mountain. Parking place fee is 2 EUR (2014). The picturesque villages of Mourèze and Liausson are the two main trailheads for the ascents on Montagne de Liausson. 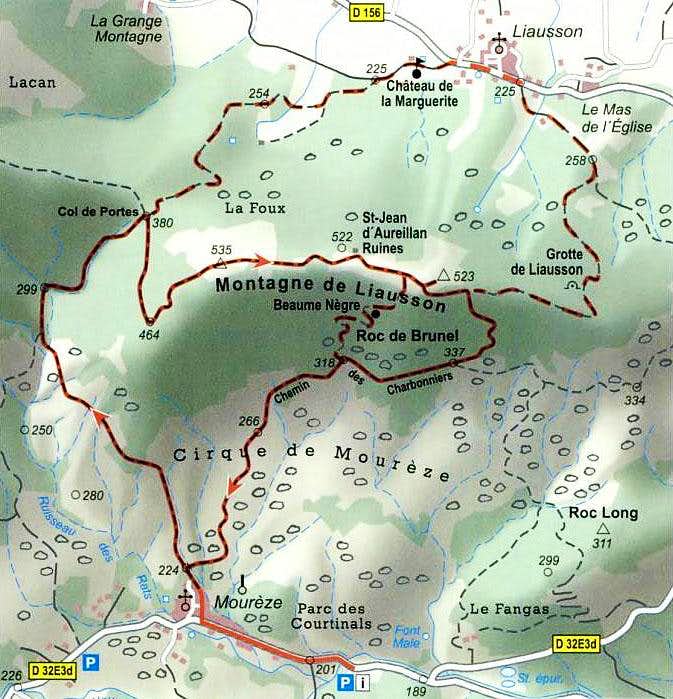 The routes through Cirque de Mourèze and on Montagne de Liausson are marked with different colours. There are more variants, but basically we can mention four routes.

It is a circular route, ascending Montagne de Liausson from the north, from Liausson village, 224 m. In the clockwise direction it ascends from the village towards the SE to the first rocky outcrops. Then it ascends more steeply towards the S and SW. Just before gaining the main ridge, the path passes a small cave (Grotte du Liausson), which is nothing very special. Then you soon gain the summit ridge and a very panoramic walk leads you by it towards the W on the highest point. Before reaching it, we pass the ruined hermitage of Saint Jean d'Aureillan (from 13th century). From the summit you descend steeply by the SW ridge, on 460 m turn sharp right and descend further across the slopes towards the N on Col de Portes, 381 m. There you deter right and by a shallow valley descend back into the village. 2 h 30 min, easy paths, only a few steeper places. 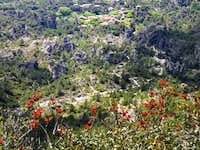 Cirque de Mourèze
It is a circular route, ascending Montagne de Liausson from the south, from Mourèze village, 225 m. In the counter-clockwise direction it goes first towards the N and NE into the centre of rock towers area - into Cirque de Mourèze itself. In the upper part of the bowl (after 15-20 minutes of walk) the path turns towards the E and starts crossing the slopes of Montagne de Liausson almost horizontally. In this part the path is called Chemin des Charbonniers. After another 15-20 minutes of walk the path branches. The blue (and green) routes go left - more steeply up towards the main ridge. In a few switchbacks we gain all the remaining altitude and close to the main ridge the yellow path joins from the right. Now we continue towards the W and soon the views open widely towards the north. The continuation is the same as described above with the yellow route. We cross the mountain to Col de Portes, 381 m, but there we turn left and descend by a shallow valley towards the SW. In the ravine of Ruisseau the path soon branches. We take the shorter left branch which first crosses the slopes horizontally (even ascending a bit) towards the SE. We pass below the picturesque towers of Castelduc and les Orgues, and then descend more towards the south into the village. 2 h 30 min to 3 h, easy paths, only a few steeper places.

This is (in the counter-clockwise direction) the same route as the above described Blue route. But from Col de Portes, 381 m, it continues further towards the NW and does a long detour, before descending again towards the south to the village of Mourèze. 4 h, easy paths, only a few steeper places.

This route visits the eastern part of the rock towers area. The beginning is also in Mourèze village, 225 m. Into the cirque and then towards the east, the route is identical with the above described Blue route. But on the crossroads (after some 30 minutes) the red route branches towards the right, continues eastwards and then turns back southwards. Through the rock towers area we return on the main road and then towards the west to the parking place. 2 h, easy paths.

Montagne de Liausson can be ascended any time of a season. Choose a day when visibility is good. In summer, parts of southern ascents can be hot. On the mountain there is no water source, but routes are short, so you don't need big supplies.

If you have more information about this area, please add. Especially the following: > Any other interesting route description. There is also a more demanding direct southern route on Montagne de Liausson, etc. > Any other interesting point of interest. > More pictures about the rock towers of Cirque de Mourèze. > The views on Montagne de Liausson from the north and pictures of the landscape around Lac du Salagou.