The information contained within this Summit Post page was created by Montana State Library and is being reproduced here under the auspices of public domain.  See Montana’s Tallest Peaks by Mountain Range. Names shown in quotes are not officially recognized by the U.S. Board of Geographic Names. 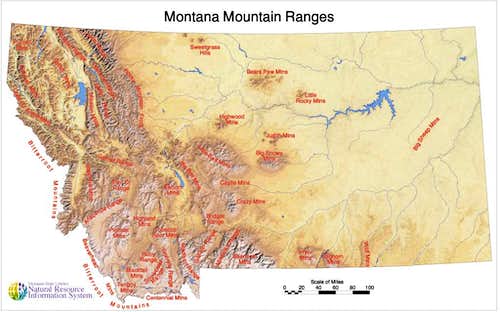 These are the 300 tallest named peaks in Montana. The list of peaks was derived from the U.S. Geological Survey's Geographic Names Information System (http://gnis.usgs.gov), and their elevations are the elevations shown on USGS 1:24,000 scale topographic maps.

Names shown in quotation are not officially recognized by the U.S. Board of Geographic Names (BGN).The Pioneer Mountains are an officially recognized name, but the separate East and West ranges are not.Most ranges do not have officially designated boundaries. This map was originally prepared by Ed Madej atthe Montana State Library in 2000, revised by Cedron Jones of the Montana Wilderness Association in 2007,and revised again in 2013 by the State Library to conform with the records of the BGN. 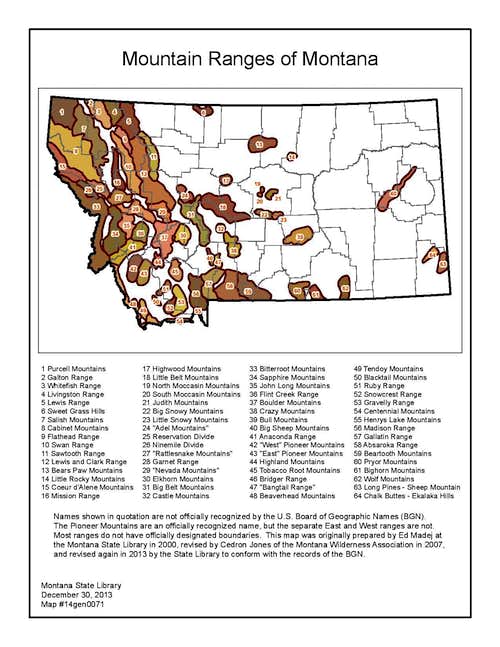 please add a link to the Whitefish range to your page

Hi Sam, great page. There is an area in far southeastern Montana called the Chalk Buttes. they are west of the Long Pines-Tri Point Lookout on your list. In his "Climbers Guide" Pat Caffrey said the high point was 4215'. There is a butte on the USGS topo higher than 4200', located at degree N 45.70862, W 104.73420, making it the highest point in this range.

There is an unnamed point of 6378' at degree N 46.78785, W 109.19898. It is east of Red Hill Road but N of the South Fork of Flatwillow Creek. There is another point of 6270' at N 46.74037, W 109.18650 which almost has the name "Little Snowies" printed on it on the USGS Quad. If it is considered part of the Little Snowies then I believe the one above also should be. There is no distinct geographical separation between the Big and Little Snowies, but they are old traditional names.

I believe that the Scotchman Peaks, mainly in Idaho but who do spill over into NW Montana, are a separate range and not part of the Cabinets. I also feel that the Lima Peaks are as distinct from the Beaverheads as the Tendoy Mountains are. I'm very interested to see if anyone has similar opinions or objections. Steve Schombel

I have edited the page to adjust for changes to the original source of information thanks to Gerry Daumiller of the Montana State Library.