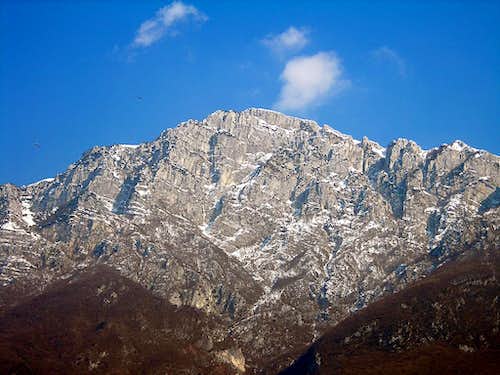 The west face
Altissimo means „Very High”. In reality this peak is not very high: it’s height is just above 2000 meter. But it still deserves the name from two aspects:
- It is the highest peak of the Northern part of the Baldo-Altissimo range
- Looking to it from Lake Garda it is a towering mass of more than 2000 m. The altitude difference between the water level of the lake and the peak of Monte Altissimo is 2014 meter!

In Italy there are many peaks called Monte Altissimo. In order to differenciate them, we can refer to this mountain as Monte Altissimo di Nago. Nago is a village 8 km north to the peak.

The beautiful environment, the easy access to the peak and the tourist hut on the peak made Monte Altissimo a popular destination for hikers, and not only in summer but also in winter.

Monte Altissimo is a subgroup of the Baldo-Altissimo group. It is separated from the main ridge of Monte Baldo with the saddle called Bocca di Navene (1420 m a.s.l.). If we consider the peaks M. Piana (1735 m), M. Campo (1650 m), Bocca Paltrane (1856 m), M. di Nago (1874 m), M. Varanga (1776 m) and Dos Remit (1223 m) as sub-peaks of Monte Altissimo, then we can say that the mountain has very well defined boundaries. From south – as I already mentioned – it ends at Bocca di Navene. From west it is flanked by the famous and beautiful lake Garda (sometimes called Benaco, too). This lake makes the spot as one of the most beautiful places of the world. From north the mass of Monte Altissimo is separated from Monte Stivo (2059 m) by the saddle called Passo San Giovanni (278 m a.s.l.). Finally from east there is the valley of the river Adige. 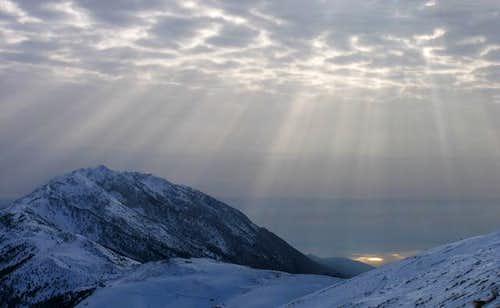 Monte Altissimo and the valley of Lake Garda are very windy. In the north basin of Lake Garda the the following winds are know:
• Òra, the most constant and famous wind. It comes from south and blows with a speed of 10-12 meters per second. It’s an afternoon wind.
• Pelér-Paesàm, is a permanent and constant wind, too. It comes from nord and with less intensity than the wind Òra. It blows during the night.
• Ponale: a partucularly strong wind, but altogether it is rare. It comes from Valle di Ledro.
• Balinòt: a vey strong wind. It comes only during winter, from east-northeast, from Monte Stivo.

On the mountain you can find various climatic zones thanks to its characteristic and variable morphology. The climatic zones are the following: from the water level of the lake Garda (65 m a.s.l.) up to 700 m it is Mediterranean; from 700 m to 1500 m it ihas mountain climate; from 1500 m up to 2000 m it is boreal, above 2000 m it is Alpine. All these climatic zones have their own typical vegetation.

In order to protect the incredible botanic richness of the area, a natural park called Riserva naturale Bes-Corna Piana has been created on the eastern slope of Monte Altissimo. Among many other rare species you can find here anemone, carex species (sedges), knautia (widow flower), Artemisia genepi, Leontopodium alpinum (edelweiss), Primula auricola, Primula spectabilis, 60(!) types of orchids and many endemic species that can be found only on Monte Baldo or nearby.

The border between Italy and the Austo-Hungarian Monarchy crossed Monte Altissimo before 1919. Monte Altissiomo was occupied by the Italian army already on the first day when they joined the war: on the 24th May 1915. The Austrian forces didn’t resist. Then the Italian army digged trenches around the peaks of Monte Altissimo. On the 15th August 1918 Czech Legions (deserters from the Austrian army) took over the role of protecting Monte Altissimo. And really, in September they defended their positions in the battle of Doss Alto di Nago. The winner of the war was Italy. Since that war the Italian-Austrian border is 130 km north from here.

The traces of the WWI activities between Italian and Austo-Hungarian army can be still seen along route 622 and around the tourist hut called Rifugo Altissimo "Damiano Chiesa".

With car:
You can get to Monte Altissimo on the highway A22, connecting the following cities: Módena – Verona – Trento – Bolzano – Brenner pass – Innsbruck (Austria). You have to exit the highway at the junction Rovereto Sud / Lago di Garda. The trailheads are only in 10-15 km distance from the junction.

With train:
The nearest train station is in Rovereto. Rovereto is only 15-20 km far from the trailheads of Monte Altissimo.

On the main ridge
There are numerous routes up to the summit. Just a few more interesting examples:

a) From Navene. Navene is at the western foot of the mountain, at the lakeside of Lago di Garda. To start the climb here is the best from two aspects: the starting point is almost on see level (on 65 m), and you can go up to 2079 m, performing more than 2 km elevation gain! The other benefit to go from here is that you can start your tour from palm trees, and a few hours later you can be on an alpine meadow, seeing all the vegetation zones ont he way. First go up the hillside on a zig-zag road to 330 m. Here start your walk to north on a very comfortable toursit path (no. 6). At Prato di Nago (1246 m) turn south and continue your walk on the path no. 632. The total tour up and down is approximately 27 km. You can do a shortcut if you turn to east when being ont he tourist path no. 6 at altitude 1050, but in this case you have to go up the very steep hillside directly against the peak.

b) From Nago. The full name of the mountain is Monte Altissimo di Nago. Of course a start from Nago is very „authentic”. It’s a long walk from the village up to the peak on path 632. Going up and down is a total 20 km.

c) From San Valentino. The easy access, starting from altitude of 1314 m. You can go by car accross the village Brentonico until San Valentino. Here you can park your car and go along an easy way till the great amphitheater: The south side of M. Altissimo, the Graziani refuge and the Bocca del Creer fork (1617m.). The ascent goes along the slopes through the steep old mule track no. 633 tup to the Damiano Chiesa tourist hut.

d) From south, on the main ridge. For those who prefer ridge tours. From Cima Valdritta (2218 m) touching Cima Longino and Cima delle Pozzette you can reach the saddle called Bocca di Navene (1420 m), and from there a 3 km long ascent takes you up to the summit of M. Altissimo. The whole tourist path is marked as no. 651.

Outlook from the Peak 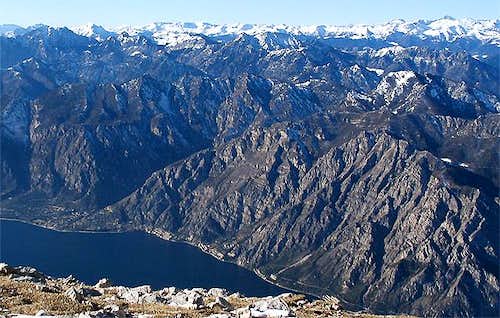 But the real attraction is to west and to south-west. If you look west, you can see the „sea” of peaks west to Lake Garda. It’s a fantastic view. But you can look down to the lake, too. The lake is just below Monte Altissimo, in 2 km depth! And if you look to southwest, you can look out from the valley, to the Padana plain! If you don’t believe that these are oustanding views, look at the demostrating attached photos!

Red Tape / When to Climb 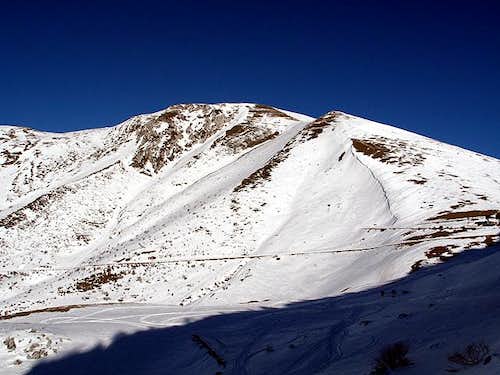 A view of the M. Altissimo near the Graziani alpine hut
No special limitations. No seasonal limitations. The easy access from east-southeast makes the mountain a popular winter destination, too. 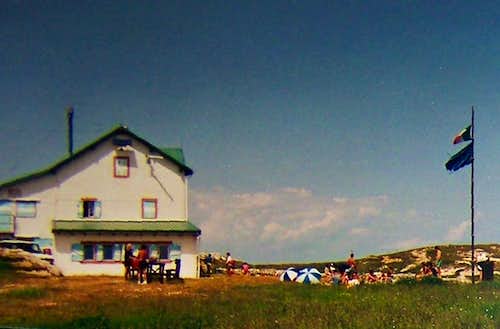 Campings
There are dozens odf campings in the nearby along the lakeside of Lago di Garda. The most appropriate campings are in Torbole and in Navene. 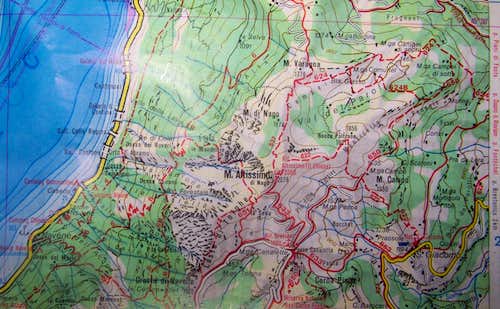