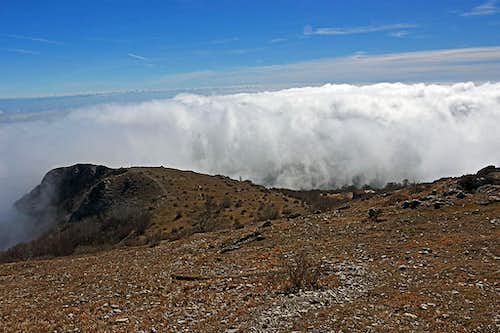 The summit mood
Distinguish this Monte Carmo di Loano, 1389 m, from the Monte Carmo, 1641 m, which rises a bit more towards the northeast, in the Ligurian Apennines, norteast of Genova.

Driving from the border between France and Italy towards the east, the range of Alps above the Ligurian coast (Ligurian Alps) is lowering, until at Savona it is bordering with the Apennines. Monte Carmo is not on the very end of this tail of Alps (it's above the town of Loano), but it is the highest summit, going towards the east. The altitude of 1389 m is of course nothing special for the Alps, but its quite isolated position close to the coast means that its southern slopes are gradually rising to the top from zero altitude and as the summit is just reaching above the timber line, it offers also a very broad panorama.

Similarly to many other mountains of Liguria, also Carmo has steep and mostly barren southern slopes, while the other side goes down towards the valley of Bardineto with gentle slopes covered with beech trees. The contrast between the opposing sides is accentuated here by the characteristics of the bedrock, as in the north prevail shale, very degradable and easily colonized by vegetation, while to the south emerge dolomite and quartzite compact rocks, that give rise to spurs, ridges and towers, creating a rugged and tormented landscape.

By the main streak of Ligurian mountains the Ligurian High Trail goes (Alta Via). It crosses also Monte Carmo, so the summit is quite frequented. In addition to Alta Via, also the trail from the southeast raises its popularity.

Monte Carmo di Loano is first of all a hiking goal. In winter I believe it can be also done with skis, but due to proximity of the sea, perhaps good conditions are not lasting long. The whole area, and especially both road passes are very popular also for mountain biking. Southeast of the summit, not far away from the Pian delle Bosse hut, rises the Rocca dell'Avio, a quarzite rock, which offers even some climbing possibilities (up to 90 meters). 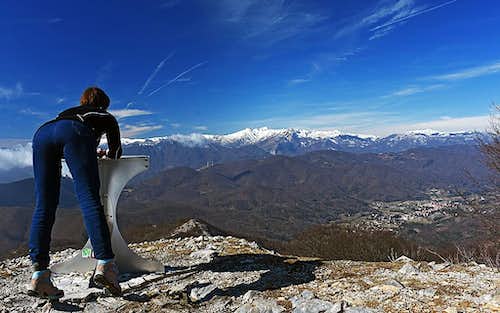 South of the summit of Monte Carmo there is a system of karst caves with beautiful decorations, arranged for tourist visits. The entry is just north of the town of Toirano. In addition to natural beauties, you can visit also the places where a lot of remains of cave bear (Ursus spelaeus) were found and places where the traces of Upper Paleolithic human presence were found. Here is the official web page in English.

The closest, but not the highest trailhead lies on the Ligurian side. That's the parking place Castagnabanca (above Verzi, the community of Loano), 570 m. You will notice the signposts for this trailheads already down in the centre of Loano.

The second and third options are both trailheads of Alta Via dei Monti Liguri. On the W-SW the local mountain road (SP1) is crossing the Giogo di Toirano (road pass), 801 m. North of the summit there is the high pass, called Giogo di Giustenice, ca. 1200 m, but I'm not sure if that pass is reachable by a normal car. It's mentioned as a 4x4 route and also as a nice mountain bike route.

1. From Castagnabanca. From the parking place we follow a clearly marked, easy path towards the NW and in good 30 min reach the Rifugio Pian delle Bosse, 841m. From there we have two options to continue. For the ascent the steeper, direct option by the SE ridge is more advisable.

On the west ridge, near Bric Pagliarina

Above Giogo di Toirano
2. From Giogo di Toirano. We start the tour on the very road pass, following the marks of Alta Via (AV) towards the east and northeast. The path is ascending moderately, it is nowhere steep or difficult. We mostly go through the woods, close to the main (west) ridge, or a bit south of it. When we exit the woods and reach a rocky part of the ridge, we are on good half of the ascent (good 1 hour till there). After a slight descent the path continues winding through low beeches, so when we get on the grassy summit slope, we have only some good 15 minutes to the top. Altogether a pleasant, easy path (on the Swiss Hiking Scale its difficulty would be T2), 1 h 45 min.

3. From Giogo di Giustenice. We can reach this saddle from various directions, from there to the top we have only some 30 minutes of walk up.

The routes from south are much longer and are overcoming much more altitude difference. 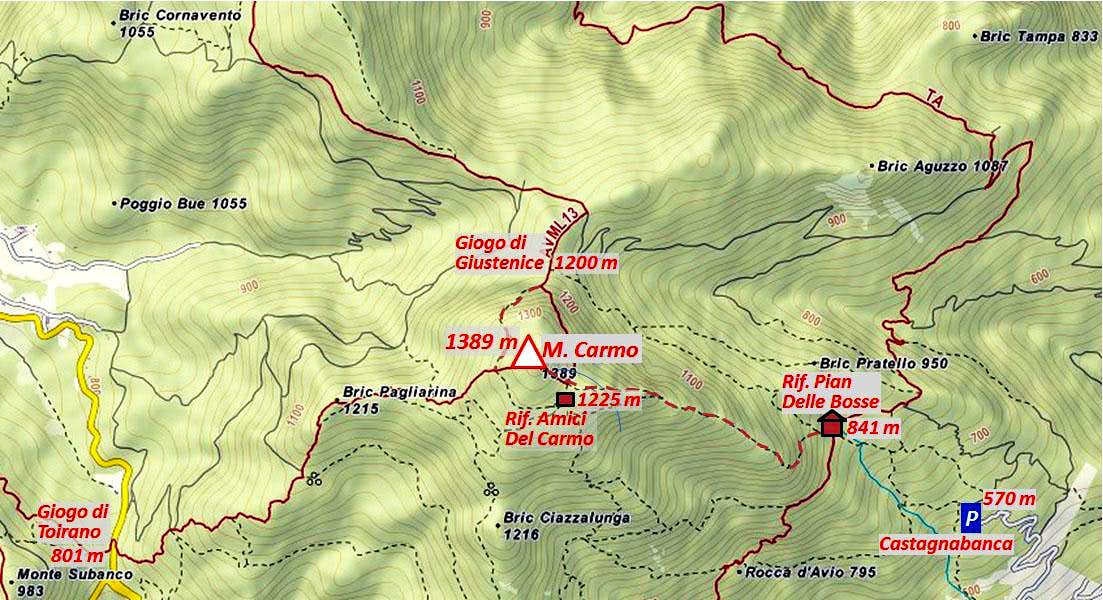 Rifugio Pian delle Bosse, 841 m, stands on a clearing just 30 minutes of walk from the Castagnabanca parking place.
Rifugio Amici dei Carmo is a private hut, just below the summit (on 1225 m).

Monte Carmo di Loano can be ascended any time of a season. In hard winter also the southern roads may not be cleaned, so you'll need to start the tour from much lower places.