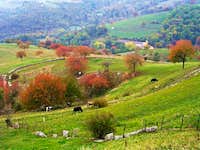 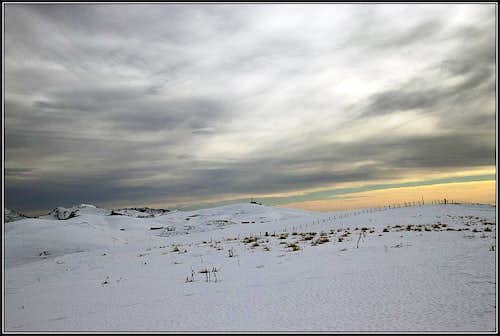 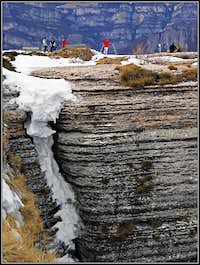 This humble summit is actually only the highest point on the north-western side of Monte Lessini plateau. And yet it is positioned high above the valley of Adige / Etch, so offering a very nice panorama. It is not only Monte Castelberto which is attractive. The whole Lessinia has an irresistible charm - once you visit it, you will be returning again and again. Its broad plateaus, gentle, sunny slopes, picturesque shepherds huts, covered with nice stone plates, bee-hive-like stone formations, deep carved creeks with moulins and the huge stone bridge of "Ponte di Veja" are only a few things which immediately come on my mind. For those who seek the stories of historical interest, Lessinia could also offer a lot. It is rich of findings from pre-historical times to the turbulent times of the 20th century, when Austro-Hungarian empire had to leave that territory. In the eastern part a German enclave of Cimbri people has survived. A part of the massif is also protected as a regional natural parc.

In fact the summit of Monte Castelberto is so flat that the mountain road reaches it. On its top there is a mountain hut, so the summit is very frequented. In summer I don't think that the road is opened for public traffic, but if you hike up from the road which crosses the plateau you would need only some 30 minutes on top. The area is very nice for hiking, biking and in winter for skiing. In normal conditions a cross-country ski track is made by the road till the summit of Monte Castelberto. That's besides biking far the most recommendable type of a tour on top. Towards the north, however, the slopes are high and falling steeply down into Val Ronchi. There you can find a challenge to do a more enduring hike up.

The view from Monte Castelberto is very broad. Towards the east the edge of Lessinia high plateau is going towards the group of Cima Carega. A bit more towards the NE there's the broad Pasubio plateau and towards the north the view goes far along the valley of Adige/Etch, till the high summits of Alps. Towards the NW there are distinct broader massifs of Garda lake mountains and behind them you can clearly see the rugged Brenta group and the highest peaks of Adamello-Presanella group. Towards the west a big part of the horizon is occupied by Monte Baldo. The southern views usually get lost in the mist of Po river plane, but in a nice day you can see beyond it even the distant ranges of Apenines. 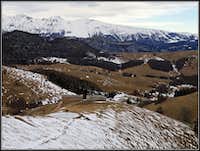 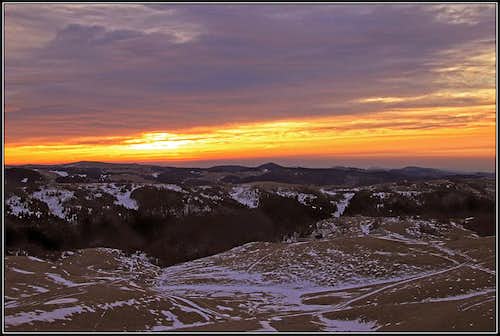 You start the ascents on the Lessinia plateau by the roads from somewhere near Verona. There are several approaches, you best look either for Passo delle Fitanze, 1393 m, or for San Giorgio sport centre, more towards the east. From the latter, the mountain road is crossing the high plateau towards the west, you may use it for biking or cross-country skiing, from Passo delle Fitanze a mountain road deters up towards the NE, so you can approach Monte Castelberto. Along these roads there are several "malghe" - alpine pastures with huts, where you can leave your car and start the hike.

On Passo delle Fitanze you can arrive also from the northern side, from the valley of Adige / Etch. The mountain road deters up in Ala village, near which there is also an exit from the highway. Approaching the summit you so reach the crossroads of Castelberto, 1701 m, from where you continue northwards on top.

You can ascend Monte Castelberto any time of a season. In winter it depends on snow conditions how high the mountain roads are cleaned.