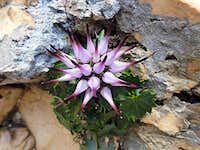 This is a minor page of a summit which is important more in a historic sense than a hiking or climbing sense.

The name of the mountain is sometimes also written as Monte Cencio. Otherwise "cengio" means "ledge" and indeed the most interesting hike up goes by exposed ledges.

Big portions of text on this page were written by Chaberton - who temporarilly left SummitPost and is now back again with us. 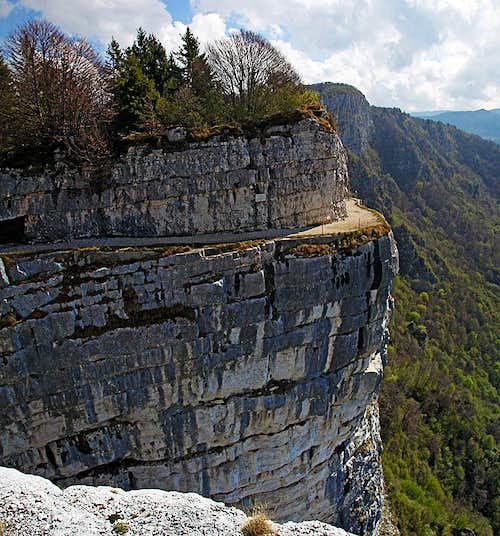 The ledges of Monte Cengio

The monument on Monte Cengio

Chaberton: Italian soldiers on frontline
On its southern end the beautiful Asiago plateau (Altopiano dei Sette Comuni) drops quite steeply to the plane of Po river. On the south-western edge a humble mountain rises, which had a strategic role in the World War I. Monte Cengio is more the edge of the plateau than a high mountain. But on the southern side, above Val d'Astico, it has nice, more than 1000 m high, steep slopes, on top finishing with picturesque abysses and towers.

In the World War I the frontline came from Monte Pasubio, over Monte Cimone, across Val d'Astico on Asiago plateau and went further into Lagorai mountains and Dolomites. The high edge of Asiago plateau was very important, dominating Val d'Astico. Until 1916 Italian army was holding Monte Cengio, but then in June 1916 lost it during the fierce Austro-Hungarian attack called Strafexpedition, having severe casualties. Later Austro-Hungarian army was not able to penetrate into the plane of river Po and Italians regained the summit. Most of the fortifications which can today be seen, were build in 1917. The summit of Monte Cengio is today proclaimed as "Zona Sacra alla Patria" - a sacred area. By a big summit cross there's a memorial plateau where commemorations are held. A monument and chapel are also above the parking place.

The summit rock of Monte Cengio is also called "Il Salto del Granatiere" - in the last, desperate combat soldiers of Granatiere squad (from Sardinia) jumped over the cliffs, if possible taking with them a nearby Austro-Hungarian soldier. More heroic and touching stories are being told from those times.

Here is another story: The overwhelmed crew on Monte Cengio continued to resist after the grenadier Samoggia Alfonso returned from headquarters. He was sent there to ask for reinforcements, but got none. On his return to Monte Cengio he was deadly wounded. Before he died he sent to his officer, Lieutenant Joseph Verdecchia, a "sublime lie": "Lieutenant, the reinforcements are coming, resist to death."

From the times of World War I another place is famous. North of Monte Cengio there are the remains of a big stronghold, one of many which were build along the border between Italy and Austro-Hungarian Empire. Forte Corbin, 1077 m, was built between 1906 and 1914 and was then also partly destroyed and abandoned during the war. Today it's a private property, there's a restaurant and a small museum. 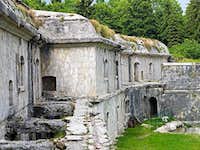 Forte Corbin today (2013)
This is the incredible story of a powerful Italian fortress, built between 1906 and 1911 to 1077 meters of Monte Cengio (northern edge), which was to dominate and protect, with its six 149 mm guns, the Astico Valley and Ravine of Assa.

In 1916, during the so-called Punitive Expedition of the Austro-Hungarian army against Italy, this fort, defended by a handful of Italian soldiers, fell into Austrian hands.
His guns, at that juncture, did not fire a single shot to defend Italy, because they were of.....wood!

Shortly after the outbreak of war with Austria, given the distance from the front lines and the chronic shortage of artillery of the Italian army, the Fortress of Corbin was unarmed, his guns sent to the front and replaced with wooden poles painted.
If this gambit worked from a tactical standpoint, the Austrians, believing still armed, continued to bomb (The 381 mm mortar., Named "Barbara", fired fifty bullets on a fortress completely disarmed), from a strategic point of view turned out to be a huge mistake.

In times of need, when its guns were supposed to defend Italy from the Austrian offensive, all was quiet!
It was just a huge box of concrete and useless. 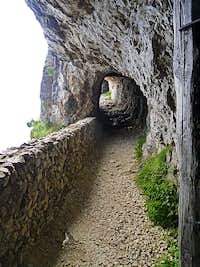 It was a mighty Austro-Hungarian army's offensive against the Italian army, which, until then, had conducted eleven (bloody and unproductive) offensives on the Isonzo front.
It was named "Strafexpediton", to punish the Italians of the turnaround. They were in fact allies (Triple Alliance) with Germans and Austrians, but after a period of no-war, a conflict already began, they allied with the English and French.

In the night between 14 and 15 May 1916, a heavy bombing stage was Strafexpedition or "Punitive Expedition", the great offensive on the plateaus of Trentino that the Austro-Hungarian command planned for over a year.
The Italian army, surprised lines of mostly offensive was repulsed all along the seventy miles, and invested from the Eleventh and Third Austro-Hungarian Army.
The folding Italian clung to some of the cornerstones areas, as the Pasubio and Passo Buole, also known as the "Thermopylae of Italy".
The breakthrough began in crisis around the defensive system, allowing the Austrians to occupy Asiago and Arsiero.
In those days the Italian troops were preparing a new defensive line back from the eleventh, in the field of Monte Cengio, was developed between the tip Corbin and Mount Lemerle, east of the country Cesuna.
Initially, the entire sector was defended by only one brigade: The "Grenadiers of Sardinia".
On 28 May 1916, after a brief resistance because of the few troops available, the fort Corbin was lost (which was absurdly disarmed of his guns).
On May 29, failure of the repeated Italians counter attacks, to regain the fort, began the fighting for the upstream Cengio.
The grenadiers of Cengio, reinforced by other departments gathered at the beautiful and good and partly disbanded after the failed counterattack at Corbin, resisted until the morning of June 3 when, after a furious melee in the trenches and tunnels, run out of ammunition, last survivors retreated to Rogue Valley. 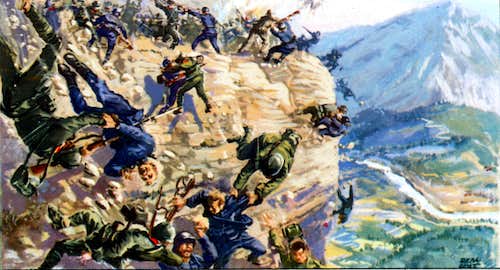 in the bloodiest phase of the Battle of Monte-Cengio Cesuna.
The Grenadiers are almost completely surrounded, the ammunition scarce, there are no adjacent units in a position to intervene to help. The Grenadiers counterattack with bayonets, rifles as clubs seek, throw stones, and engage in furious combat, rather than be taken prisoner, clinging closer to the Austrian and rush from the spur that will be called "The Leap of Grenadier "."

Lost the top, the entire defensive line was now clinging to the edge of the southern basin of Asiago; last bulwark against the spread of the Austro-Hungarian troops in the plain Vicentina.
But the stubborn defense to the last of the grenadiers and infantry brigades "Liguria and Catanzaro" throughout this area, allowed the Italian army to gain time, to flow by reinforcements from the Isonzo, from the rest of Italy and even Libya and Albania.
After June 6 the Austrian offensive began to lose strength, and for the difficulty of supplying the troops too advanced, for what counters sie Italians, increasingly urgent and effective.
The Monte Cengio and the Fort Corbin returned so under Italian control, becoming part of the defensive line.
The field of Cengio was powerfully fortified, becoming one of the cornerstones of the Asiago Plateau front, and remained in Italian hands until the end of the war. 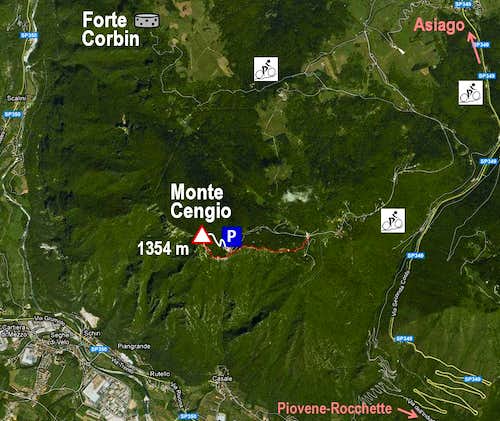 The path by the ledges of Monte Cengio
The quickest way to get on Asiago plateau is from the south. From Venezia - Milano highway you deter north, pass Vicenza and drive by the highway till its end in Piovene-Rocchette. From there a good asphalted road winds up on Asiago plateau. Just when it reaches it, a narrow, also asphalted road deters westwards. It gains some altitude and then goes just along the plateau edge. The last parking place is just below Monte Cengio.

Just after you deter westwards from the road Piovene-Rocchette - Asiago, you can choose also a road, which goes over the plateau to Forte Corbin.

All these roads over the plateau are very nice for biking.


What To Do There?

The cliffs of Monte Cengio

The view across Val d'Astico A bike proposal
As you can come with car just below the summit, only to ascend Monte Cengio is a little endeavor. By the road, closed for public traffic, you have only some 10 minutes to the top. More attractive is the path by exposed southern ledges. On the parking place you go south to the edge of plateau, where the plates guide you first a bit down, then right across the walls. The path goes by ledges, high above picturesque abysses, in many places also through tunnels. It is broad, comfortable and all the time well protected, so appropriate for everyone. In tunnels a torch is not really needed. After the path approaches the summit it winds up in a few turns and gets to the cross. Some 20 minutes on top.

A longer hike is possible if you park on one parking place more towards the east. From there the military path goes all the time by the southern edge of the plateau, mostly by ledges. Below the last parking place it joins the path, described above. For that hike you'd need 1 h on top and one hour back.

Several years ago I saw in the cliffs below the ledges path several climbers. In those rocks it looks there are short and appealing climbs.

The third outdoor option of Monte Cengio is a bike tour. All the roads on Asiago plateau are great for biking, so in the area of Monte Cengio you can for example combine in one tour a visit of Monte Cengio and Forte Corbin or extend the tour even more towards the east.

On Monte Cengio you can come in almost any time of a year. In winter on Asiago plateau there's usually a lot of snow, so make an inquiry in Asiago tourist office if the road is cleaned. Otherwise in winter many roads on the plateau are converted into cross country ski tracks.

> Of climbing routes in the walls of Monte Cengio.
> Any winter experience of that area?