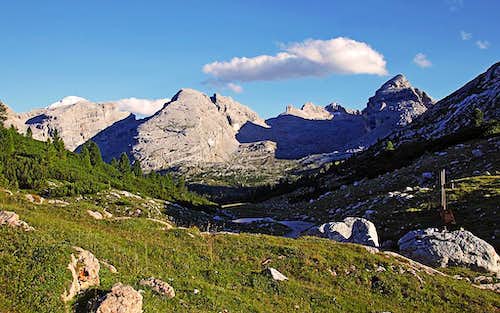 The group of Monte Ciaval from the north
It's so many these 'horses' in European mountains, so it's difficult to distinguish them. This is already my third SP page on 'Monte Cavallo' and there are many more. Only in Fanes Group (Dolomites) there are two. The first one is more popular. It is Sas dla Crusc / Heiligkreuzkofel / Sasso Santa Croce, with the second name L'Ciaval / Monte Cavallo. Monte Ciaval I'm describing here is much less known (but even a few meters higher). It rises in the core Fanes group, in the ridge of beautiful peaks, starting north of Passo Falzarego. It's eastern slopes are falling down into Val Travenanzes.

Regarding the names, you will notice that when mentioning the mountain for the first time, I will write all its names (usually Ladinian, Italian and in some cases also German). Later I will try with only the Ladinian name, as these people are autochthonous there. So, Monte Ciaval (on sam maps also Cima Ciaval) is Ladinian and Monte Cavallo is Italian.

Monte Ciaval summit
Monte Ciaval is by its look not a very appealing mountain. It's just a high elevation in the ridge, only the summit pyramid gives it a bit nicer look. But the mountain is quite attractive as hiking goal. In the northern part of core Fanes group it's the highest summit, which can be reached also by non-climbers. And the views from its top are really fine, especially towards the three mighty Tofane, rising towards the sky just on the other side of Val Travenanzes. Near the summit of Monte Ciaval the only good passage goes from Gran Fanes meadow into Val Travenanzes and further on Passo Falzarego. That's another big advantage of Monte Ciaval for trekkers. And last but not least, Valun Blanch / Vallon Bianco on the northern side is a wonderful area for tour skiing. Even the passage to Val Travenanzes can be in good conditions an objective of a nice, high ski tour. An additional attraction of the small Monte Ciaval group is also the fact that during the World War I its summits were heavily fortified. Many remains (caverns, posts, paths) can still be seen today. 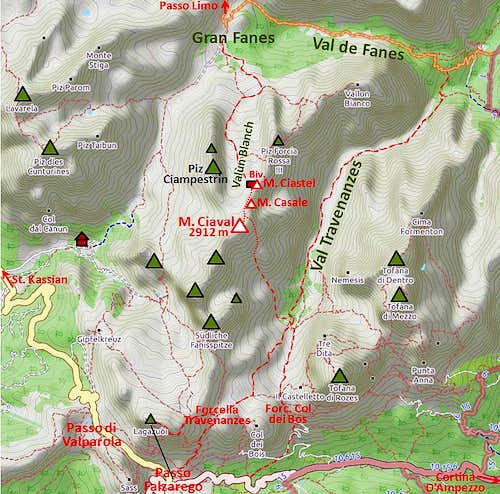 From the south, where the highest and most attractive summits of core Fanes group are rising, the main ridge comes to Monte Ciaval from the Pizza Fanes Nord / Punta Fanes Nord / Nordlische Fanesspitze, 2969 m. The fore-summit just SW of Monte Ciaval is Point 2862 m.

From Monte Ciaval the main ridge continues in the NE direction, but towards the N a strong side ridge branches, Piz Ciampestrin Sud, 2910 m, being its highest elevation (Cime Campestrin).

Monte Ciastel
Towards the NE, the first neighbour of Monte Ciaval is Monte Casale, 2894 m. Then the rugged ridge lowers a bit to the towers of Monte Ciastel / Monte Castello, 2817 m, below which a bivouac stands. Then a broad saddle comes, beyond which the rocky Pizes/Cime de/di Furcia Rossa are rising. They host a nice, and despite remoteness of the area, even a bit more popular ferrata. Finally, on the very NE, in the wedge between Val de Fanes and Val Travenanzes, there's Croda del Vallon Bianco / Monte Vallon Bianco, 2680 m, which can also be reached by a marked path. Between the main ridge and the ridge of Piz Ciampestrin lies the high valley named Valun Blanch / Vallon Bianco. The last valley which needs to be mentioned, is Valun de Ciampestrin / Vallon di Ciampestrin. It reaches from the NW (from L'Gran Pian / Pian Grande) till below the saddles between the two summits of Monte Ciaval and between Ciampestrin Sud and Monte Ciaval.

The World War I

During the Big War the frontline went close to Monte Ciaval, but the summit was not just on it. The most fierce battles were fought around Passo Falzarego. But the ridge of Monte Ciaval was heavily fortified by Austians as well - in case of Italian breakthrough. A good military path was built into Valun Blanch and a material cable way reached just below the ridge. There's still one benefit of all that - today in one of the barracks a nice bivouac is arranged and many summits are more easily reached due to military paths.

Towards the north
The whole eastern horizon of Monte Ciaval panorama is being blocked by the huge massif of Tofane. But the view on them is fascinating. Especially on the nice pyramid of Tofana di Rozes we can see every feature of its walls, and routes over it. Towards the south the highest summits of Fanes group are also blocking some of views, but they also look impressive. Towards the west and north, the views are more opened, so we can nicely overview all high summits around the high plateau of Fanes - and some more, peeking from behind of them.

All approaches on Monte Ciaval are quite long. The northern (normal) approach starts on Gran Fanes meadow. Fortunately, on the Fanes Plateau there are also two good mountain huts, supporting the ascent. They are especially valuable in winter.

Fanes Hut, 2060 m, and a bit more remote Lavarella Hut, 2042 m. They both stand on Pices (Small) Fanes, beyond Limo Pass. On Gran Fanes there is only a shepherds hut, a small restaurant in summer. In addition to the trailheads on the E and SW (which serve also to the more direct routes), the two huts can be reached also from the Tamersc Valley (from Rif. Pederü) by taxi, or from other starting points via high saddles. From the Fanes Hut you have some good 30 min over Passo Limo to Gran Fanes pasture.

Parking place below Capanna Alpina, 1720 m. We drive there by a mountain road, deterring from the road from San Cassiano to Passo Valparola. From there Gran Fanes meadow can be reached in 2 hours. Or, for those who know the route - the summit of Monte Ciaval can be reached directly from L'Gran Pian.

Paso Falzarego, 2105 m, or Rif. Lagazuoi, 2752 m, reachable by cable way. From there we hike into Val Travenanzes and descend by it to path branching on 2000 m. There the SE ascent starts.

Podestagno, on the road Cortina-Dobbiaco, ca. 1300 m. There the mountain road into Val de Fanes branches westwards, but it is closed for public traffic. We can hike either by the road on Gran Fanes (3 h) of a bit later deter from the road left into Val Travenanzes and hike up by it to path branching on 2000 m. There the SE ascent on Monte Ciaval starts. 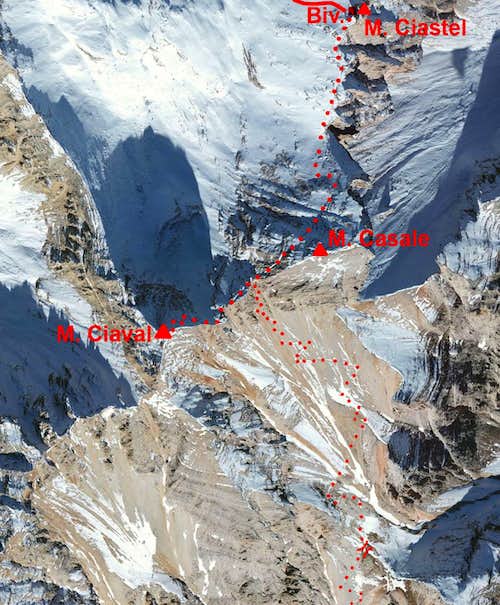 From M. Castello
Here, I'm only listing the routes on Monte Ciaval. More detailed descriptions are on the two separate route pages.

1. Northern ascent. This is the normal route. It follows all to the top old military paths, which are now marked. On the Italian scale the route is graded EE (Escursionisti Esperti, experienced hikers), on the Swiss Hiking Scale it would be graded T4/T3 (till the bivouac it's T2). From Gran Fanes 3 h. 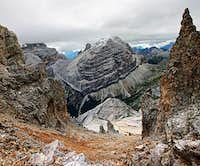 S-SE ascent route
2. South-southeastern ascent. This route is in normal conditions not more difficult than the northern one (T4/T3). Together they are a part of 'Alta via Dolomiti' - dolomites long-distance trek. The S-SE ascent starts on the paths branching in Val Travenanzes, 2000 m. From the road near Podestagno it's some 3 h till there, from Passo Falzarego it's 2 h 15 min on foot or 1 h 45 min from the upper cable-car station on Lagazuoi. From Val Travenanzes on Monte Ciaval (via Forcella Casale) you will need another 3 h - more than 600 m of the upper part is steep, unpleasant screes, so this route is much more recommended for descent!

3. North-western ascent (through Valun de Ciampestrin). This ascent route is still unclear. From the broad saddle between Ciampestrin Sud and Monte Ciaval (Forcella Ciampestrin, 2737 m) it is NOT recommended to descend westwards into the upper part of Valun de Ciampestrin. Below the scree slopes there are steep and dangerous rock walls. But one branch of Valun de Ciampestrin may more kindly reach up towards the notch between Monte Ciaval main summit and the SW fore-summit. On Kompass online map even a tour ski descent is drawn there, but it's not clear how correct is that information or how hard the route would be.

4. The ridge from Monte Ciaval on Pizza Fanes Nord. During the World War I also by a part of this ridge a military path went, but today it is all destroyed and traversing requires climbing. Rock is very friable.

5. Monte Casale ascent. The northern route to Monte Ciaval passes just below the summit of Monte Casale. Only a short and easy climb from there on top.

6. Monte Ciastel ascent. The tower, rising just above the bivouac, is reachable only by climbing (UIAA III).

Bivacco della Pace, 2760 m. It stands just below the summit tower of Monte Ciastel. Nicely renovated ex military hut can host 10 people and is always opened. Good option especially to break the long tour from Podestagno, or to sleep there on a longer trek.

The whole southern and western part of the mountain belong to the nature park of Fanes-Sennes-Prags. So, camping there is officially prohibited.
http://www.rifugiofanes.com/en/fanes-sennes-braies-natural-park.htm

Monte Ciaval can be ascended any time of season. The above mentioned route difficulties are for summer conditions. But due to altitude and noth oriented summit slopes, you can find snow or ice even in summer. We ascended it on August 12th, but as it was 2 days after a summer storm, we also had some snow on the paths. The southern screes will be mostly free of snow in summer/autumn.

In times of tour skiing or on a usual winter ascent a complete winter gear is needed (ice pick and cramopons). The ascent till bivouac is easy, requiring only skis, but later the ridge crossing is steep and exposed. For the ski tour from Val Travenanzes absolutely avalanche safe conditions are needed. The slopes to Forcella Casale are very steep and exposed to avalanches!