ganesh70: M. Cuar from the south

The name: Cuar is a Friulan word, which means Corno (=horn).

In the easternmost part Carnic Pre-Alps are low and from the mountaineering point of view less attractive. Not so from the hiking point of view. Very panoramic peaks, still live alpine pastures, attractive mountain roads for biking, fauna and flora on the border of mediterranean and alpine world, all that is attracting visitors. And yet, one can not say that the area is overcrowded, despite the nearby big cities like Udine.

Because the southern ridges of Carnic Pre-Alps represent the first high barriers to south-west winds, bringing moisture from the Adriatic sea, the area is characterised by high amounts of precipitation (especially in spring and autumn), which all has a special effect on a dense vegetation.

Monte Cuar massif from the south, from Monte di Ragogna

Where Tagliamento river comes out of the Alps, spilling its waters over the Po river plane, there is the border between Julian Alps on the east and Carnic Alps on the west. Some time Tagliamento flows just at foothills of the latter, and that's the area, where some 1250 meters high the slopes of Monte Cuar are rising. Above the river banks there are on sunny and fertile slopes many villages, like Avasinis, Peonis and Forgaria. From Forgaria a good road ascends towards the north, reaching first the plateau of Monte Prat and then continuing around the eastern side of Monte Cuar - first on the saddle Cuel de Forchia and then further down towards Avasinis. On Cuel de Forchia, 884 m, the massif of Monte Covria, 1160m, is attached on Monte Cuar. The western border of Cuar massif is the valley of Arzino river (Val d'Arzino). There goes the road up to Sella Chianzutan (pass) and down to Tolmezzo, the centre of Carnia mountains. And finally, north of Monte Cuar some more higher mountains are rising, representing the easternmost part ob Carnic Pre-Alps backbone.

Monte Cuar itself sends from the summit two distinct ridges: the long NW ridge runs towards the neighbouring summit of Cuel dai Poz, 1377 m, and the shorter eastern ridge (and slope) runs towards Cuel di Forchia (saddle), 884 m. The southern and south-western slopes of Monte Cuar are much steeper than the northern slopes, which are soon overgrown with nice woods. 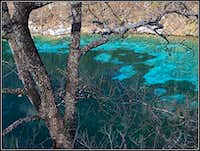 A small pearl is the blue Cornino lake, lying by the road, near (NE of) Cornino village, and SW of Peonis, just below the southern slopes of Monte Covria. It is a national reserve, a protected area, where an experiment of inhabiting griffons (a kind of white-head vultures) took place.

From Monte Cuar two very different landscapes can be seen: on the south the river Po plane with many towns and a dense network of roads, finally finishing in the lagunas of Adriatic sea, and on all other directions the most various mountain world of Alps. On the east one can distinguish several high peaks of Julian Alps, on the western side, in a clear day the Monte Cavallo group is beautifully distinguished. But right of it, the whole north-western and northern horizon is boiling with sharp peaks of Carnic Alps. One really has to be an expert to recognize them all. 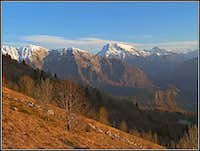 On the east ridge

Most of visitors come to Monte Cuar from the south or the east. The nearest highway is Udine-Tarvisio, we must exit it in Gemona di Friuli. The already mentioned mountain road connects Forgaria on the southern slopes and Avasinis east of Monte Cuar. The ideal starting point for the ascent is Cuel di Forchia, 884 m, the saddle between Monte Cuar and Monte Covria.

Just below the saddle, on the SW side, a narrow mountain road deters up towards Monte Cuar, gains in several turns some altitude and then runs horizontally all around the eastern side of Monte Cuar. On the other side it again starts gaining altitude and first over the broad meadows of Malga Gador finally reaches the meadows of Malga Cuar, 1219m. From there you have only one good hour of hike up to the top.

Just south of Monte Cuar, there's an alpine meadow, where from the Forgaria-Avasinis road a narrow macadam road deters towards the NW. This road connects the Monte Prat plateau with Cerdevol in Val d'Arzino and is also a possible approach to the mountain.

All these mountain roads are very attractive goals for mountain (and ordinary) bikers.

The summit of Monte Cuar can be reached by the marked paths No. 815 (to Malga Cuar and on top) and No. 815a (from Cuel di Forchia on top). The latter is steeper, but in dry season still only an easy hike-up. In winter, or when the eastern ridge is covered with snow, some steep section can require some care. From Cuel di Forchia on top we need 1 h 15 min to 1 h 30 min, for the whole round tour (also the road to Malga Cuar) we need some 4 hours.

From Cuel di Forchia also the summit of Monte Covria can be reached by a marked path. We need some 45 minutes to reach the top.

From the valley there are also some more marked paths, which reach the saddle of Cuel di Forchia. One goes from Peonis (first by the road, then through the woods, some 2 hours), the second one is the NE shortcut for the Avasinis road. Malga Cuar can also be reached through the forrests from the northern side, but approaches are longer.

As Fabrizio, our very active member lives at the foothills of M. Cuar, I first tried to persuade him to write the page. He generously left the task to me, but promised to participate comments and pictures.