"Dome Land" or "Domeland" - there has been a discussion going on on the Taylor Dome Page as to how the wilderness in Sequoia National Forest is called. Having followed this discussion I decided to put up my contribution on this topic which is Dome Land Sardina, a.k.a. Monte Limbara. The resemblances are striking and now that there is another dome out there - Pywiack Dome in Yosemite I can't hold myself back anymore ;-).

One thing I have to concede, however: the domes on Monte Limbara don't reach the size of the Californian domes. Most of them reach about 1100 - 1200m in elevation and show faces of some 200 - 300m. There are climbing possibilities but the region is far less popular than the limestone cliffs near the coast and less profound than the (again limestone) north faces of Supramonte and Monte Albo.

For the average hiker like me Monte Limbara offers quite a number of good trails and roads which wind their way between the domes and offer fantastic views from all sides. There is a serious drawback, however: the highest summit on Monte Limbara, Punta Balestreri is covered by radar, TV and radio towers. It's not a sight you want to remember so that I left out Punta Balestreri from all of my pictures.

The processes which formed these domes are similar to the ones in Yosemite: moisture can penetrate the hard granite rock only just underneath the surface. Any erosion - heat or cold - thus will only make the rock come off in layers - forming these very smooth surfaces. The erosion type is sometimes called "cotton sack erosion" since the domes resemble a sack stuffed full with cotton or wool. There are other types of granite which are porous enough to let water penetrate into the core of the rock. These will form cavities over time and in the end show grotesque formations (called Tafoni) like the ones near Punta Cugnana. BTW: Monte Limbara is the only mountain range in Sardinia's Gallura Province which does NOT show these grotesque Tafoni structures 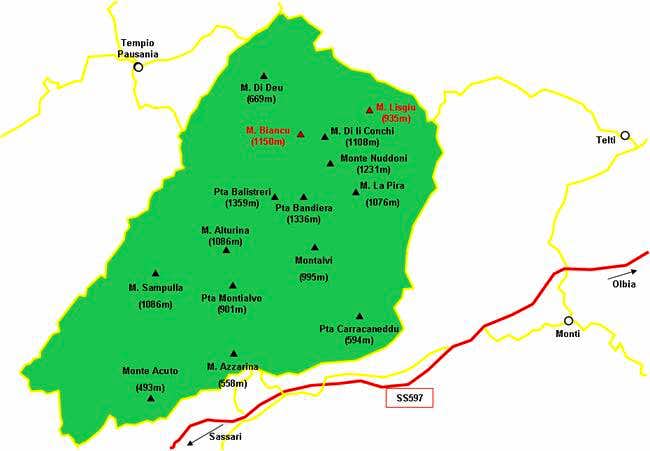 Interactive Map of the whole Monte Limbara range. The summits, which already have been posted to SP are marked in red. The Domeland Region is the range between Monte Lisgiu and Punta Balestreri.

Situated across Pass di li Conchi this summit is more like an accumulation of large boulders. It is easy to reach from the pass, bein encircled by two forest roads.

Like Monte di li Conchi, Monte Nuddoni is a summit composed of lots of large boulders. To its western side these boulders reach an impressive size. The mountain is located far from the trails of Monte Limbara and thus not very easily to be reached. To climb (or boulder) it you'll need to cross dense macchia undergrowth.

One of the most beautiful domes of Monte Limbara this dome is not named on any of the maps I have looked at. Looking at www.atlanteitaliano.it on can pinpoint its position accurately to:
UTM 32T:
X=0516316.7
Y=4524205.1

Any help to put the correct name on it is appreciated.

My personal favourite on Monte Limbara. Thanks to sardo I finally can put a name on it. The overall size of the west face is approx. 100m with 130m of developped routes.

Monte Lisgiu has an own page on SP. It is a large, dome shaped rock which grows out of a high plateau (not unlike Moro Rock).

Sardinia can be reached either by plane or by ferry. The main ports are Porto Torres and Olbia in the north and Arbatax and Cagliari in the south. Airports are at Alghero and Olbia in the north as well as (again) Arbatax and Cagliari in the south. For exploring the northeastern part of the island where most of the mountains are the best entry point is Olbia, which is where most flights go anyway.

Approaching the mountain from Olbia airport
Get on motorway SS131 north around the city of Olbia on the western side. At the intersection with SS127 turn west into direction Telti. Shortly before you reach Telti, SS127 turns right sharply and heads through the town. At km 30 - shortly before you reach an abandoned train station in a road pass - there is a parking place on the left hand side and it is here that the trails to Monte Limbara start

After parking your car there follow a dirt road west always keeping to the right. After half an hour you will reach a pass from where you will be able to see the impressive Monte Biancu in front of you. Follow the trail, which more or less heads directly towards the mountain. The trail turns south before you reach the mountain and winds toward Passo di li Conchi on the eastern base of Monte Biancu. There you are awarded with a view of all the domes of Monte Limbara and here you can start your exploration of the mountain range.