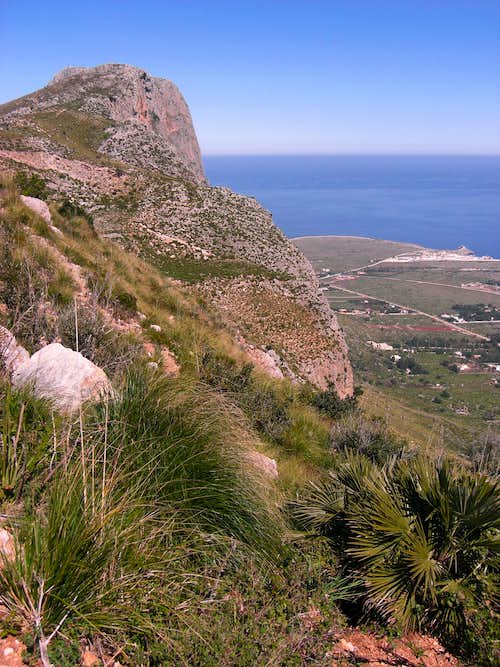 Monte Monaco is the northernmost summit in the north - south heading range of Parco Naturale dello Zingaro, a National Parc in the northwest of Sicily, west of the capital Palermo. Though not very high it rises directly above the Mediterranean sea with an almost perpendicular rockface to the north, which gives Monte Monaco a tall appearance.

Monte Monaco towers high above Capo San Vito, a narrow cape which stretches out to the north and forms the western boundary of a huge gulf, the Golfo di Castellamare. The village San Vito lo Capo lies on the end of this cape and directly below Monte Monaco. It offers great bathing opportunities, the village beach is really beautiful.

To the south are the higher summits and peaks of the National Parc to which Monte Monaco does not belong.

Monte Monaco can be summited from the east or the west side of the mountain. If you combine both routes to a loop it is roughly more than a half days outing. One of the good things about this mountain is the beach and the Mediterranean Sea waiting for you after the climb. 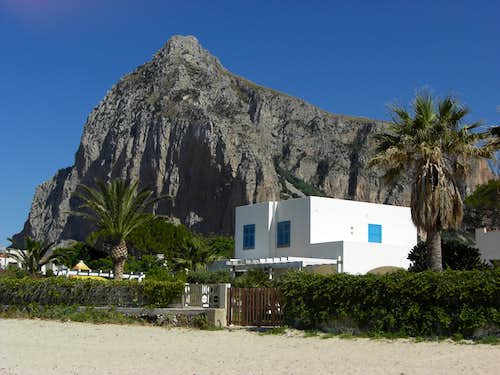 The best possibility is to get there by car. There is no railroad.

The public bus services can be - well - more than disappointing. If you don´t mind about it, check here if you can get a good connection. But always remember: if there is a bus on the schedule means not automatically that it will operate at all or be on time.

Near Baglio Messina leave the SS 187 where Custonaci and San Vito lo Capo is signposted (road number SP 16). Follow the direction San Vito lo Capo until you arrive at the village limits. Turn right for a shortcut to the east coast of the cape, the road is called “Strada Communale Mondello”.

The trailhead for the west face route is located about 450 m after the intersection. The paved road bends to the left, a dirt road goes straight on. There is an information panel at that intersection with the trails of Monte Monaco! Park your car at the side of the street.

For the trailhead of the east face route follow the Strada Communale Mondello until it reaches road number SP 63. Turn right on this road and follow it to the south; after some old tunafish plants (Tonnara del Secco) the road starts ascending the east slopes of Monte Monaco.

Soon you see to your right a steep dirt road climbing Monte Monaco. Soon after the intersection of this road with your road, there is a turnout on your left. Get parked here, go back to the intersection and start your climb.

The west face route is signposted and marked! Follow the dirt road in eastern direction ascending slightly. Stay left at a first road junction, stay on the right road at a second one. After about 100 m a trail starts where the road bends to the left. Follow this trail, it zigzags up the west slopes of Monte Monaco west face.

When the trail arrives at a huge meadow which is used as cattle land stay left it disappears. Follow a route, marked with stakes, along some rocks in east and southeast direction until the trail appears again and zigzags up to the broad north ridge of Monte Monaco. There you meet the old quarry road which is used by the east face route. Follow the road to the summit, passing by some old limestone quarries. Be careful there with the quarries, you easily might fall into an unexpected hole !

Follow the different paths between the quarries and pass a water reservoir up to the summit with a huge summit cross.

Follow the dirt road up the mountain, it makes three switchbacks and arrives at a broad saddle between Monte Monaco and bold Pizzo di Sella.

Be careful now, there are old limestone quarries, you might fall in ! Follow the different paths between the quarries and pass a water reservoir up to the summit with a huge summit cross.

Pay attention: there is a steep, nearly perpendicular rockface to the north.

Enjoy the wonderful sight over the sea, the mountains of Zingaro, the Golfo del Castellamare and its adjacent coastal ranges and Monte Cofano and Monte Erice to the west. If the weather is clear you might see the island Levanzo west of Trapani. 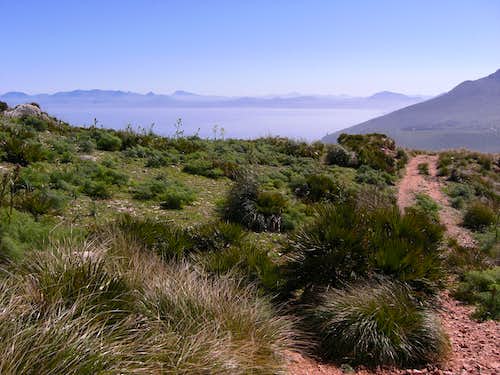 Though not belonging to the National Parc Parco Naturale dello Zingaro there are restrictions of camping, fire and hunting. 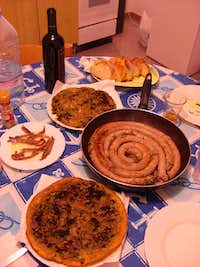 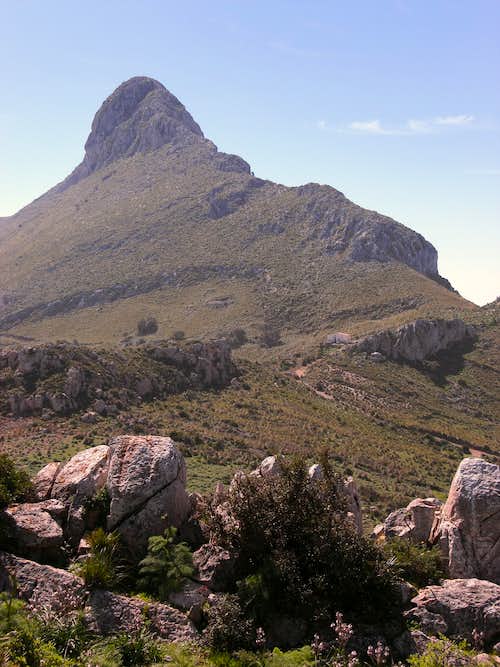 Monte Monaco is, due to the Mediterranean climate, a whole years hike.

Best time is early spring until early summer (February through May) and October/November.

June through September is normally too hot - you would not like hiking with 45 grade centigrade ...

As this hike is not longer than about 3 hours, there is plenty of time to hit the beach or to tackle the bald Pizzo di Sella (704 m), standing south of Monte Monaco:

For this alternative, follow the access road to the uppermost farmhouse and pass it to the south. There will be no trail. Scramble up to the beginning of the north ridge of Pizzo di Sella and follow the ridge closely, it soon gets steeper and rockier and there will be some rock climbing up to the summit (UIAA I). Descent is on the same route. 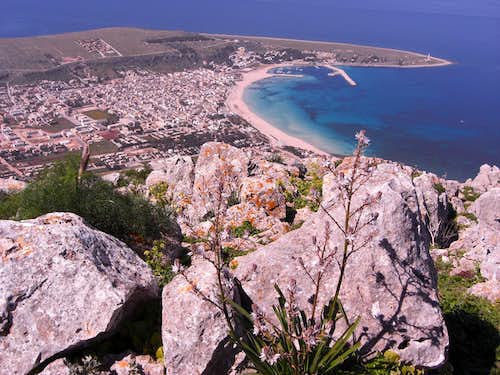 There is a good guide book with a hike onto Monte Monaco available in both German and English: