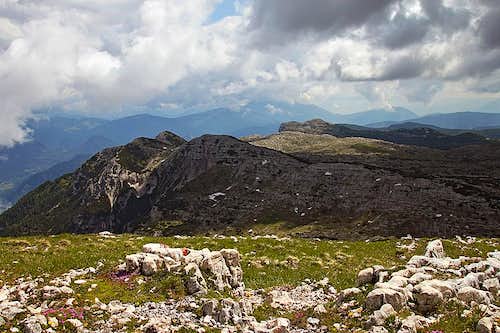 The eastern part of Asiago high plateau - M. Ortigara is in sunshine 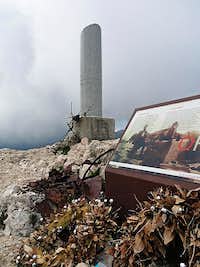 In a mountaineering sense Monte Ortigara is a completely unimportant mountain, rising only a little above the high plateau of Sette Comuni. And yet, virtually every Italian knows it due to tragical events during the World War I, when one of the most fierce battles was fought on its slopes. Today due to an easy and short ascent its summit is an object of pilgrimage, so many people visit it.

The grassy and rocky summit of Monte Ortigara is a bit indented from the main crest of mountains, rising on the north of the plateau. Its prominence towards the neighbouring Monte Castelnovo is only some 50 meters, the southern slopes are lowering a bit more down to the meadows. Only the slopes north of Cippo Austriaco, 2008 m, are falling high down into Valsugana. Those slopes are offering you a longer and more strenuous tour, if you choose so.

Also the panorama from the summit is nothing very special. The highest summits of the northern chain around Cima Dodici are obscuring that part of the horizom, right of them you can see some summits of Lagorai and Dolomites mountains, on the west, some higher summits of Prealpi Venete e Trentine are already quite distant. And towards the south lies the big plateau and other forehills. Geologically, as most of the central part of higher Asiago Tableland, also Monte Ortigara is built of limestone from the Jurassic period (eastern side), and of Triassic dolomite (western side).

World War I on Monte Ortigara 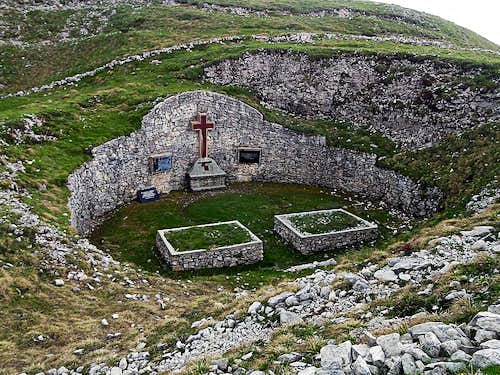 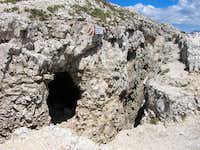 Monte Ortigara is known as "The Calvary of Alpini", but not only Italians have reasons to have nightmares of this barren, rocky plateau. The casualties on the Austro-Hungarian side were also enormous.

After the successful "Strafexpedition" in 1916, Austro-Hungarian army had to retreat, because many troops were sent to the Russian frontline. They fortified positions across the upper part of Sette Comuni plateau, holding strategic summits below the main ridge. Position war lasted almost one year, until Italians decided to attack the sector of Monte Ortigara.

With heavy shelling the attack started in the night from June 9th on June 10th. Next day infantry attacked and fierce fightings began. Italians took a few nearby elevations. Next day poor weather prevented successful continuation of attacks and when it cleared, on June 15th, Austrians counter attacked, regaining some strategic points. And that story went on and on. One side advanced, the other side pushed them back and so on. On the 19th of June Italians succeeded to capture the highest point of Monte Ortigara, but already 3 days later Austrians counter attaccked with heavy shelling and then on June 25th with elite infantry attack. In those days casualties on both sides were the highest. Italians withrew to original positions from before June 9th. The battle of Ortigara was over, nothing had changed, except that tenths of thousands were dead and crippled on both sides. The majority of bodies were burried only in 1920, when also today's monument was erected - "not to forget", as it is written on it. 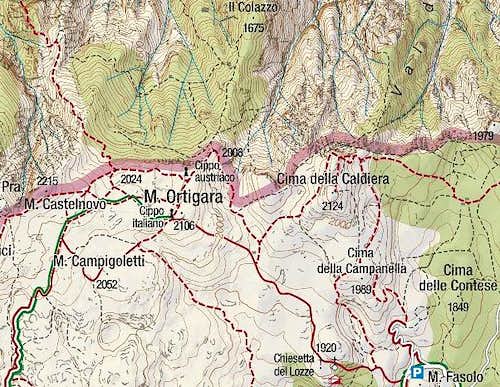 1. From Piazzale Lozze, 1750 m. This is a very easy and short ascent, but very worth doing it. You will reach the summit in 1 h. From the parking place the marked path leads you towards the W-NW. In some 15 min you reach the church of Lozze and the nearby Rif. Cecchin. From there you continue along the path no. 840-841, named the Path of Peace. With many ups and downs it brings you to Baito Ortigara, 1937 m, on the ex alpine pasture. There the path branches, but take the leftmost one which soon brings you up to the monument on the highest point. You return by the same route or you visit other places of interest in the vicinity. This tour can be in winter conditions also done as a ski tour.

2. From the south-west. All ascent approaches from the SW join on Bivio Italia, 1987 m. See the page of Cima Dodici where it is described how to get there by ex military roads from Malga Larici, Malga di Galmarara or Piazza delle Saline, hiking, or using a mountain bike. From Bivio Italia you can continue northwards some 1-2 km, then the road turns into a mountain path. By the road you first pass Busa del Cavallo (ex military logistic center), then the meadow of Cuvolin (water source there), then a small pass where the path turns right down for some 50 meters of altitude. Then you regain the NE direction, pass the graveyard of Monte Campigoletti and start ascending on Monte Ortigara. First you reach the bell and then the highest point. Less than 1 h 30 min from Bivio Italia, 3 h from Malga Galmarara.

In winter almost all ex military roads are arranged as cross country ski tracks. Centro Fondo Gallio has its base at Campomulo, 1530 m. You need to pay entry (9 EUR in 2013) and some 300 km of well maintained tracks are available (together with Marcesina area). The hardest one goes to Monte Ortigara. For some 29.5 km and 570 m of altitude gain the average time for the round tour is close to 5 hours.

To ascend Monte Ortigara we don't need to sleep on the mountain. Otherwise near the parking place there is Rif. Cecchin, 1920 m. It does not have a winter bivouac (as shown on the map).

When To Visit Monte Ortigara?

You can visit Monte Ortigara any time of the year. In winter conditions you will have less chances to explore ruins from the World War I and you will need skis or snowshoes.

A good description of World War I events is in Richard Galli: The Battle of Ortigara, June 1917