Monte Pelmo is one of the main peaks of the Dolomites mountains, although there are some higher ones.

The Dolomites are subdivided into massifs of limestone rock that are separated from each other by mountain passes, mostly with a good road. Monte Pelmo is a such a massif for its own. So it is also a mountain group such as Civetta Group, Pale di San Martino Group etc. More about the group at the end of the page.

As the mountain stands so alone as a giant block, it can be seen very well from other summits of the Dolomites - and of course it offers a great panorama for those who climb it.  Monte Pelmo was the very first high mountain of the Dolomites that was climbed - on September 19th 1857 by the Englishman John Ball who later became the first president of the famous British alpine club - the very first alpine club. With his climb the alpine history of the Dolomites startet. You can still follow his footprints on the normal route, that has not become a via ferrata and requires experience and a good head for heights although no big climbing is demanded.

West of Monte Pelmo summit and separated by a deeply cutted pass (Fisura, 2726 m) is Pelmetto ("little Pelmo", 2990 m). This huge block with a 1100 m high north face is little only in comparison to near Monte Pelmo itself.

From the summit of Mounte Pelmo two ridges spread out and build two shoulders - Spalla Sud (3061 m) and Spalla Est (3024 m). Between them to the south is a huge "amphitheatre" - filled with many rubblestones. To reach this area is the key of the normal route on a passage called "Ball ledge".

If you don't want to climb but only admire this impressive mountain it is great to do the walk around Monte Pelmo, which takes one day with starting point at Forcella Staulanza. This is one of the nicest hikes in the Dolomites.

Difficult rock climbing seems not to be very popular at Monte Pelmo though many routes have been found in the past (see below). The most classic route on Pelmo and the only one Pelmo is famous for in climbing environments is "Rossi-Simon" (TD+), with 850 m drop. More difficult and more famous routes can be found near in Civetta group.

many more nice pictures of this beautiful mountain have been posted: 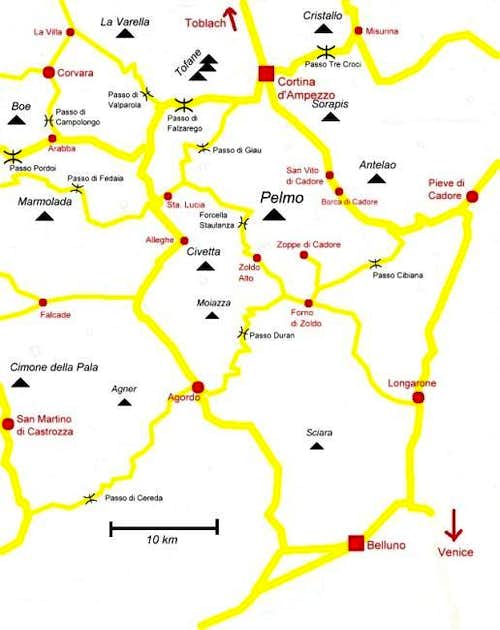 Monte Pelmo is situated between the well-known valley of Ampezzo / Cadore and the not so well-known of Zoldo. These two valleys are linked by the road over the Forcella Cibiana (1530 m) [mountain pass road]. Best starting point is the Passo Staulanza mountain pass (1765 m) west of the mountain. 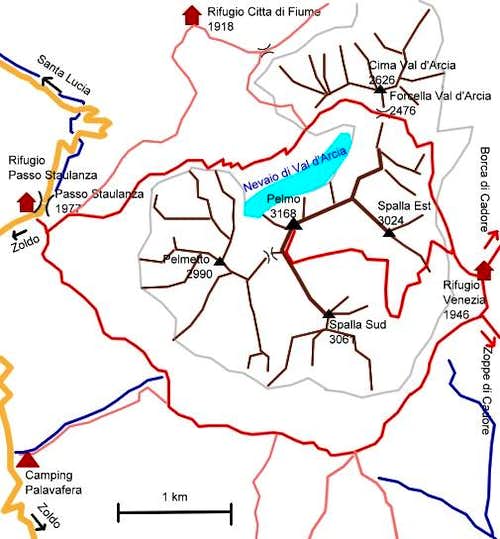 Basecamp for the climb is the mountain hut Rifugio Venezia (1946 m) (another name: Rifugio Alba Maria de Luca) east of the mountain where it is most convenient to stay the night. Two popular hiking routes through the Dolomites (Nr. 1 and Nr. 3) pass the hut, so you should make a reservation

You get there using marked mountain paths in:
· 2 h from the village Zoppe di Cadore
· 2 h 30 min from Passo Staulanza mountain pass - nice walk with great views to Monte Civetta, but often the path is very muddy
· 3 h 30 min from the village Borca di Cadore
· 4 h from Passo Staulanza via Forcella Val d'Arcia (2476 m). Nice walk directly underneath the north face of Monte Pelmo, but a little strenious because of many rubblestones. I recommend this with the shorter way back to Forcella Staulanza, so you have done the walk around the mountain in addition to the climb.

A campground in the upper Zoldo valley is Camping Palafavera (1516 m). You can start you climb directly from there.

still no SP member has climbed Monte Pelmo on a day with a fine panorama view. If you can fill this gap - go ahead and post pictures!

no limits known to me

July to September is the normal season. The Ball ledge should be free of snow.

A little map can also be found here on "www.planetmountain.com"

The only village inside the group is Zoppe di Cadore (1460 m), SE of Monte Pelmo

The whole area between Monte Pelmo and Passo Cibiana hardly reaches an altitude of 2000 m. So main parts here are forests.
As mountains can be called:

- Monte Punta (1952 m): in the branch between Zoppe di Cadore and the Zoldo valley. A nice easy hike to the most central viewpoint of the Zoldo area

- Monte Rite (2182 m) - directly above Passo Cibiana, also a perfect viewpoint. In the first world war Italian troups built a road to and a fort on the summit.

In 2002 famous mountain climber Rheinhold Messner opened a museum on Monte Rite. Because of it's height this "museum in the clouds" is open only in summertime from June until the first snowfall in fall. Access to the museum is possible in a 90 min walk from Passo Cibiana or with a bus shuttle service from there.
Homepage (unfortunately only in italian language): www.monterite.it