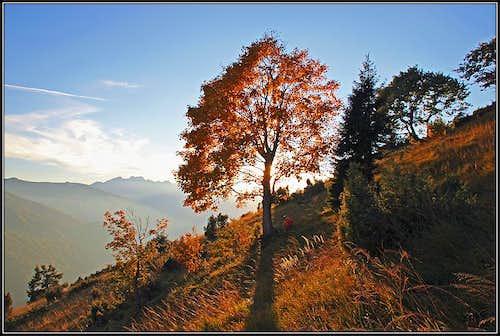 Autumn on the southern slopes of Monte Raut

The summit of Monte Raut

The northern slopes and the summit ridge

Carnic Pre-Alps, at least its northern part, are one of the last true wildernesses of Central Europe. Treks through them can be real adventures on which you may for a day or two not see anybody. On the southern edge of that area however rises a mountain which is quite often ascended. Monte Raut is actually a small massif, similar to the Monte Ressetum massif, lying west of it. Rising just above the Furlania plane it is relatively easilly accessible from a road which over a saddle connects two nice Carnic towns Poffabro and Andreis.

The view from the top of Monte Raut is magnificent, so the ascent is almost a must if you want to know this area better. Many other summits nearby are much harder to climb. Monte Raut is primarilly a mountain for hikers, although the wilderness of the area enables also scrambling and easy climbing adventures, seeking passages by steep and dangerous hunters paths and orientation riddles, following decayed shepherds paths. Three marked paths join on Forcella Capra, south-east of the summit, afterwards one marked path continues on top. 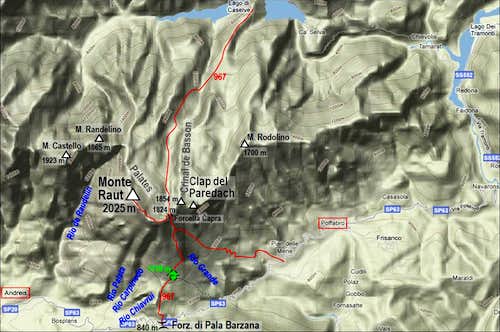 The southern edge of Carnic Alps is waving above the Furlania plane in a form of a long ridge. The southern slopes of these mountains are very steep and rocky. Also Monte Raut massif is showing towards the south wild rocky faces, while towards the north more gentle, but due to relatively low altitude overgrown slopes are descending.

The broader range of Monte Raut is the whole area between Cellina river on the south, Torrente Silisia and Lago di Selva on the north, Val Tramonti on the east and Monte Ressetum on the west. But on this page I want to describe only the narrow part with the summit of Monte Raut itself.

The road from Poffabro on the east to Andreis on the west goes over a saddle which divides Monte Fara, 1342 m, on the south from Monte Raut on the north. This is Forcella di Pala Barzana, 840 m. Monte Raut rises directly north of it in a form of a strong, rounded bastion. The western face of this bastion is wilder. Towards Andreis from the summit of Monte Raut rocky abysses are falling down into a few narrow ravines. The SE side of the bastion is mostly grassy, also steep, but only on top intermitted with a few rocky steps. These slopes reach the main ridge on Forcella Capra (the Goat Notch), where the easiest passage over the ridge goes. More towards the east of Forcella Capra the ridge continues with the walls of Clap del Paredach, 1854 m, 1840 m. While from Forcella Capra a wide and long valley is descending towards the north, the NE slopes of Monte Raut are in a form of a karst-like gentle slope, almost a plateau. There are rocky steps, a wild, overgrown terrain with many holes, bumps, ravines and only a few decayed ex shepherds and hunters paths. On the east of this world from Clap del Paredach a distinct, almost straight ridge is descending in the northern direction. It is called Crinal de Basson. Beyond it, in the NE direction in a similar valley Ricovero Casera Valine (hut), 1344 m, is standing. But belonging already to the mountains towards the east, it is of only a little importance for Monte Raut ascents. Till the summit of Monte Raut the ridge coming up from Forcella Capra already bends so much that from the highest point on it is running in the northern direction. I saw marks going by it down from the highest point, but I have no information where they leave the ridge, which below looks wild, finally reaching the notch below Monte Randelino, 1865 m. I will not miss much saying that the area north and north-west of Monte Raut is very abandoned and also hardly passable. Lower on the northern side the slopes of Monte Raut are descending towards the artificial Lago di Selva. By the southern side of the lake a mountain road goes, which is, I guess, not closed for public traffic. Yet, that area again is very remote and lonesome, especially the side valleys south above the lake. 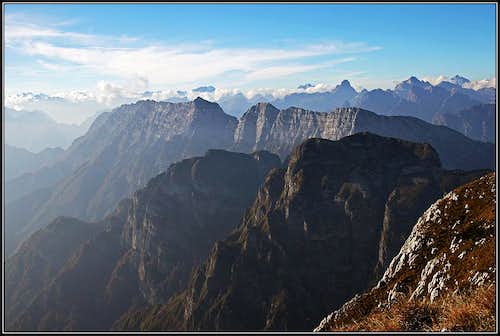 Go on Monte Raut on a clear day if you want to overlook the mountain world above Furlania plane and to have a great view over the plane itself! All the way down to Adriatic sea. But not only that. Monte Raut is remote enough to allow also splendid long distance views and also the whole scenery on the mountain is beautiful.

So, Towards the SE, down along the abysses of our mountain you see almost 1800 meters below the towns and fields of Furlania plane. Towards the E, the edge of Carnic Alps waves. The view in that and in the NE direction is completely opened - all the way to Julian Alps, rising on the horizon. Towards the NE and N, there is the whole wilderness of the Southern Carnic Alps and Pre-Alps. Mountain massifs are like on a parade. The most exciting is the view towards the NW. There are the sharp and wild Dolomiti Friulani - Dolomiti d'oltre Piave. Monte Duranno is like Matterhorn, the nearby Cima dei Preti is a high, ridge-like fortress and towards the north other summits are boiling. As allways, from behind these peaks, the "real" Dolomites are showing up - Antelao, Pelmo, Marmolada, Schiara group and Dolomites above Belluno town. Very interesting is also the view towards the SW. Deep below there is the lake of Barcis shining and above it, seen from their shady side, there is the whole chain of the southernmost Carnic Pre-Alps group, waving from Cimon del Cavallo to Col Nudo. 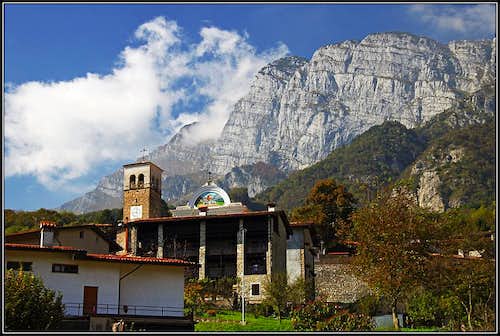 See the parent page of Carnic Pre-Alps how to reach the towns on the NW edge of Furlania plane!

1. The beautiful Poffabro town (worth walking through it) can be reached either from the south, from Maniago, or from the east, from Meduno in the mouth of Val Tramonti. Andreis (also a very nice town) and Barcis can be also reached by a good and broad road from Maniago. Andreis and Poffabro are connected by a narrow asphalt road, crossing Forcella di Pala Barzana, 840 m. This saddle is the first and most convenient trailhead for the ascent on Monte Raut. From the saddle down towards the east, half way to Poffabro there is a place called Pian delle Merie, 560 m. There the second marked path starts, ascending up to Forcella Capra.

2. On the north, above Lago di Selva, there's the second possible start for a tour on Monte Raut. On Panuch peninsula, on the altitude of some 650 m, the marked path deters southwards from the mountain road. As said, I guess only that the road is allowed for public traffic. To get on it, you start in Val Tramonti. On the southern edge of Lago di Redona you cross the river over the dam and drive NW to Tamarat and Chievolis. From there continue westwards to Lago di Selva, cross the creek over the dam again and continue by the southern shore. Then the road ascends on Panuch peninsula.

If Andreis itself could be a starting point for a normal tour is unknown to me. Several marked paths are going from the town towards the N and NE, but their goals are different. Either they are round tours through the parc or they go over the saddles much west of Monte Raut. However, for real adventurers there is an ascent from Andreis side which requires only easy climbing and scrambling, but is very hard in orientation respect. It is called Via dei Cacciatori di Andreis. Its start is the same as the mark path to Plangiaria.

2. From Pian delle Merie, 560 m. By the path towards the NW into Rug della Brenta creek bed, then up the grassy slopes below Clap del Paredach and towards the W on the small grassy side ridge, where the path joins path No. 1 (967). In a few minutes up on Forcella Capra and left on top. 4 h - 4 h 30 min.

3. From the north. We start on Panuch peninsula, on some 650 m. By the mountain road or marked shortcuts (No. 967) we go towards the south. On the altitude of some 875 m the path 967 deters right (SW) from the road which continues towards Ricovero Casera Valine. Now we go towards the SW, up and around the ex Basson pasture. There, on some 1300 m, the path turns again into the southern direction and by a shallow, broad valley we ascend Forcella Capra. Then right by the main ridge on top. Long, but not steep ascent through an abandoned land. Some 4 h 30 min. 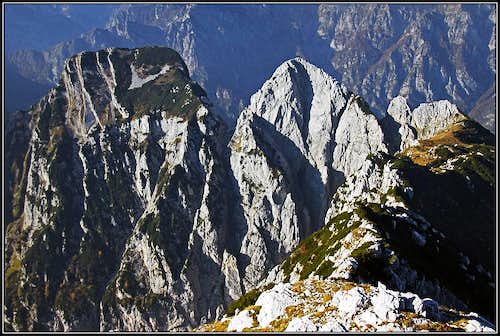 4. Via dei Cacciatori di Andreis. This is an ex hunters passage into the Rio de Raudelin gorge and then up on the main ridge and on top. Easy climbing, scrambling, very hard orientation! Only on a few places marked with red spots. The whole route is spectacular, leading through wilderness and over a considerable altitude difference. 1600 m of altitude, 5 h 30 min.

The story of hunters of Andreis. The hunters of Andreis used to make big chamois hunts in the Monte Raut area. Beaters were pushing animals in the end of Rio de Raudelin canyon, where shooters were waiting them with guns. The shooters had to go from Albins high up in Monte Raut walls and then by two ledges crossing over the whole western wall of Monte Raut towards the north. The access to the higher ledge is now frequented by some climbers as it is possible to gain from it the ridge and by it the summit of Mount Raut. Route description in Italian: click here

The ascent from the south is not long and can be done in good half a day. There are no mountain huts. On the northern side of the massif there is Ricovero Casera Valine, 1344 m, but it is in the neighbouring valley. If you would consider the northern ascent too long, setting up a tent over night is possible on many places. Leave absolutly no traces behind you! Actually, formally speaking, camping is prohibited as you are within the Natural parc. The area is very remote, water sources can be found.

Monte Raut lies within Parco Nationale Dolomiti Friulane. The whole area is protected and as such a part of Unesco's world heritage. One of parc centers is also in Andreis. In the northern part of the town you will find information point ("Centro visite l'avifauna"). Parco Dolomiti Friulane home page: http://www.parcodolomitifriulane.it/

Monte Raut can best be climbed in dry seasons, so approximately from June to October. But also winter ascents are in good conditions not very difficult. The southern slopes must be safe from avalange danger and for the summit ridge you will need winter equipment (crampons, ice pick). Actually the northern side is more than appropriate also for tour skiing. But the remoteness of the area perhaps results that in winter conditions rarely anybody climbs on top from the north. Also almost certainly you will until late in spring find the road to and along Lago di Selva closed.