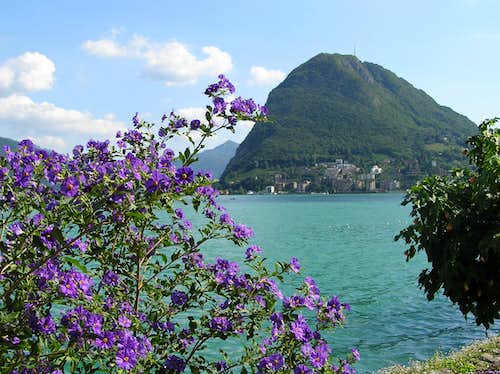 Lugano-Paradiso – that is the name of the area where this mountain is to be found. I think the name Paradiso is justified as indeed this part of Switzerland in general and the lake Lago di Lugano in particular is,
as the name indicates, beautiful and flourishing. At any direction you turn you’ve got views as from a postcard.

Soft shaped green mountains, palm trees, deep blue-green shimmering lakes, small picturesque villages, snowcapped mountains in the far and a nice Italian touch to the food and wine makes this place not too far from paradise. On top of this add a nice and mild Mediterranean climate with lot’s of sun as Lugano is situated at the south side of the Alps.

Mount San Salvatore, or actually Monte San Salvatore in Italian, is the house mountain of the city of Lugano, which is situated in the Swiss canton (“state”) of Ticino, close to the Lake Lugano and the Italian border.
San Salvatore is dominating the skyline of Lugano together with it’s neighbor mountain Monte Bré on the other side of the lake.

The city of Lugano is well connected to the excellent Swiss railway network and thus easy accessible from Milan in the south and Bellinzona in the north. From Zurich it would take you around three hours via the Gotthard tunnel. The nearest airport is Lugano-Agno for domestic flights within Switzerland and the international airport Milano-Malpensa down in Italy.
There is even an airport coach shuttle straight from Malpensa to Lugano railway station. Getting to the foot of San Salvatore

By bus:
Take the bus outside the Lugano central railway station towards Lugano-Paradiso and get off at the last stop, the San Salvatore funicular cable station.
Head to the left and walk one block up and you will see the yellow signposts appear which will mark the entire route up to the top.

By train:
Take the train from the Lugano central railway station to Lugano-Paradiso. Get off, walk up the street and you will see the yellow signposts indicating the way up.

By foot:
Lugano is a small city, so you could easily walk to the foot of the mountain from pretty much anywhere in the city. Just follow the lake in the Southern direction until you reach Hotel Eden and take the street going up on the right side. In the first bend, you'll seee the yellow signposts indicating the summit.

Note: San Salvatore can also be climbed from a number of other small villages. Most importantly Morcote and Melide. There are frequent buses from the Lugano central railway station to them (even on Sundays). 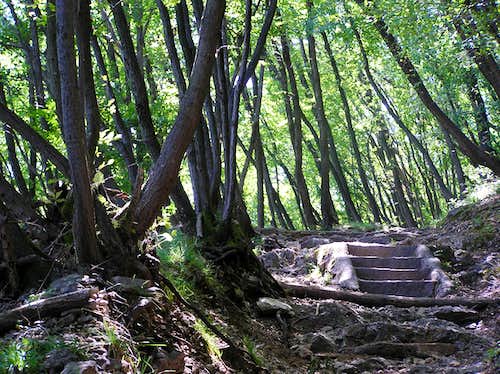 A good trail takes you in a pleasant pace up the soft slopes of the mountain. As you gain altitude, more and more of the magnificent Monte Rosa panaroma will emerge in the north.
The trail is more or less entirely in the lushy, green forest. The views down at the city of Lugano and the green water of the Lake Lugano are very beautiful.
On the top of Monte San Salvatore there is a concrete terrace called "Terrazza Panoramico" atop of a small church. From here you can enjoy stunning views. From the summit there are magnificent panoramic views of Lugano and the lake, the Monte Rosa massif with the Dufourspitze and the north Italian plain. The hike up to the summit would take you approximately two hours.

From the summit there are lots of different trails to descend. We choose to walk down in the humid and shady forest to the small village of Melide. Other nice villages are
Carona, Morcote and Figino. It is also most rewarding to stop by one of the many small and cozy restaurants (called “grotto”) on the way down to have some lunch or just something to drink. There is also a via ferrata. To get to the start of the route, take the cable car to the mid station called Pazzallo.
The via ferrata on the San Salvatore is a tough one and not for via ferrata beginners.