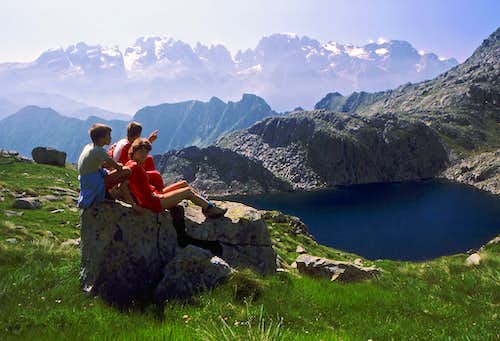 Monte Serodoli is rising in the north-eastern part of Presanella group. The summit itself is not a top mountaineering goal, because altitudes from Presanella till it are lowering, but together with the well known »Giro dei Cinque Laghi«, with the altitude of still 2708 m and due to a very fine panorama, Monte Serodoli represents one of the most rewarding hiking goals above Madonna di Campiglio. And more - in winter and spring Monte Serodoli offers one of the best ski tours in the whole Trentino - Alto Adige area.

The broader massif is made of the Oligocene tonalites (named by the nearby Passo Tonale) and sometimes diorites, but the narrow area of Monte Serodoli is made of the Oligocene granites and granodiorites. No wonder that in the neighbouring valleys many picturesque lakes can be found. Stopping by them is a pleasure on every hike. With the saw-like kulisse of Brenta in the background, these lakes offer many picturesque scenes.

From the summit of Monte Serodoli we have a very beautiful view on the high east face of Cima Presanella. Equally fine, but much different is the view on the other side, on the wild, dolomitic towers of Brenta group. Towards the north, above the nearby ridges also the glacier peaks of Ortler goup can be seen.

Even if marked paths are reaching the summit also from the north and south (both approaches are very long) almost the only recommended trailhead is on the east - Madonna di Campiglio. On the northern part of the town we deter on the mountain road which goes towards Ritorto alpine meadow. From this road several marked trails go towards the west (se the embedded map). So, your trailhead will depend only of the plan, how you want to do the famous »Giro dei Cinque Laghi«. In any case I recommend a round tour, for example done clockwise. An exception might be a ski tour where returning by the ascent route would be recommended. 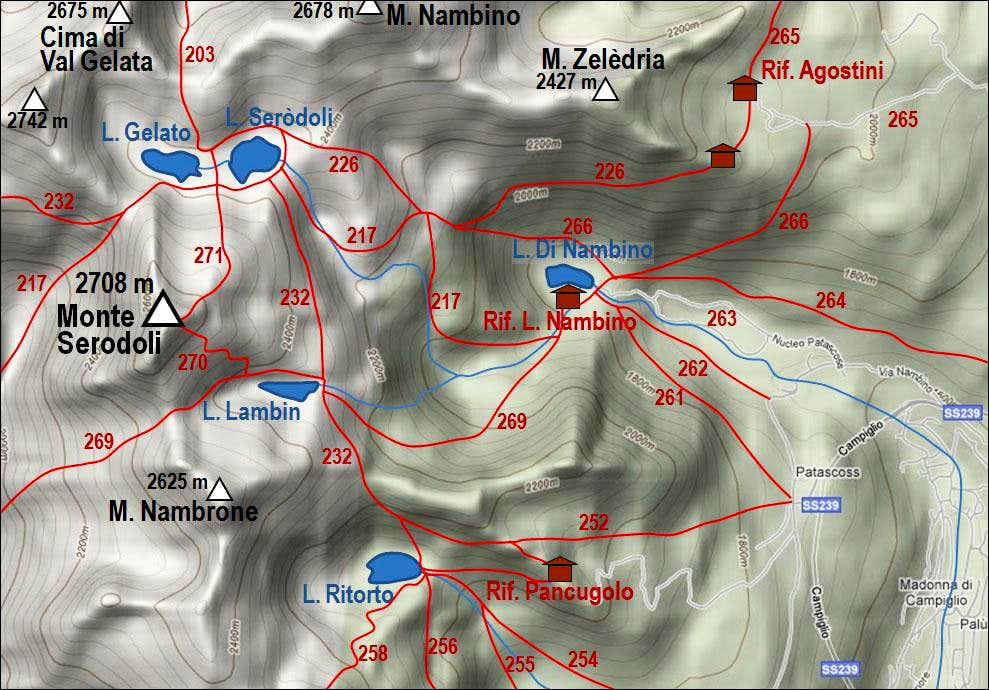 While there are many approach marked paths, on the summit of Monte Serodoli only two paths go: from Lago Lambin (SE) and from Lago Serodoli (NE). Both are easy in summer and will be described as parts of the "Five Lakes Round Tour".

General. A pleasant one day hike over a granite highlands, passing several cute lakes and accompanied by nice views in distance. Gear: good shoes and poles. By the Swiss alpine scale the overall difficulty rating would be T2. (The grading system for hiking and scrambling routes is here.)

Description. It is best to leave the car in Val Nambino, somewhere by the creek of the same name. Then we continue some time by the road southwards, but before it goes below the cable car we deter from it to the right, on the path No. 252. Just to the Pancugolo hut we don't need to go. By ski slopes we gain the ridge above the Lake Ritorto, 2055 m, and if we wish, we can descend to its shore.

The marked path continues below the flat ridge towards the NW, and then goes over it in a more northern direction, reaching on the other side Lake Lambin, 2350 m. This is a smaller one but just above it we already see the SE slopes of Monte Serodoli. Above the northern shore we continue passing the lake and then when it ends, deter right up, following the path No. 270. It is quite easy, in less than an hour we overcome also the last rocks and reach the top. A wonderful view opens on all sides.

Around Monte Serodoli there is of course more than only five lakes. From the summit we were able to count 14 of them.

Descending to Lago Gelato
The descent will go by the path No. 271, at first some time towards the NE, then more towards the N. We were there in August (1988) and to slide down to the next lake simply used a fine snowfield. From the double lake Lago Gelato, 2393 m, – Lago Serodoli, 2370 m, we continue the tour towards the SE, down to the valley. We can use one of the two marked paths (No. 226 and later 266 or No. 217) to descend to Lago di Nambino, 1768 m, where the hut with the same name stands. This is a very popular place and we shall meet many visitors there. From the hut we just continue down by the Nambino valley to the parking place. The last part goes already through the woods.

To ascend Monte Serodoli and to do the »Giro dei Cinque Laghi« tour we don't need to sleep in mountain huts. Still, as the area around Madonna di Campiglio is touristically very developed, nearby you can find many mountain huts. In the vicinity of our tour these are:

We can do the tour on Monte Serodoli any time of a season. In winter and spring this is one of the most beautiful ski tours in the area. The ski tour goes by Nambino valley till the hut, then by the marked path No. 217 till the Lake Serodoli and finally by a moderately steep NE ridge on top. Only the last meters should be done on foot. Between the Lakes Nambino and Serodoli passages must be chosen wisely, because some slopes are steep and there can be a danger of avalanches.