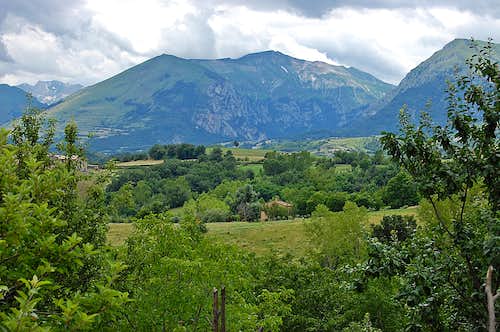 At 2173m Monte Sibilla is one of 10 summits of over 2000m in the Sibillini range of the Italian Apennines. It isn’t the highest. That particular distinction applies to Monte Vettore at 2476m and further to the south. But Sibilla is perhaps the most accessible. The summit is just a couple of hours walk and scramble(644m ascent), from a high hut (Refugio Sibilla 1540m) – which in turn is easily accessible by road from the village of Montemonaco, on the eastern border of the National Park.The Sibillini National Park straddles the western border of Marche and eastern border of Umbria, as well as encroaching on the northern parts of Abruzzo and Lazio. There is enough walking and mountaineering within this area to provide worthy entertainment for several summer seasons – and yet the area is just one small bit of the middle of the Italian Apennines. I would emphasize – that is just summer. In winter there is superb potential for snow and ice climbing on a mini-alpine scale. The highest summit of the entire Apennine chain is Corno Grande of the Gran Sasso group. This is about 60km to the south-east of the Sibillini and at 2912m perhaps actually reaches ‘alpine’ in scale.There are several potential valley bases in the vicinity of Monte Sibilla, the largest being Amandola, to the north east and then the closest; Montemonaco, Rubbiano and Montefortino. Public transport is available, between the villages, but a car is a considerably more convenient way to explore the area. Suggest refer to Sibillini National Park link below. 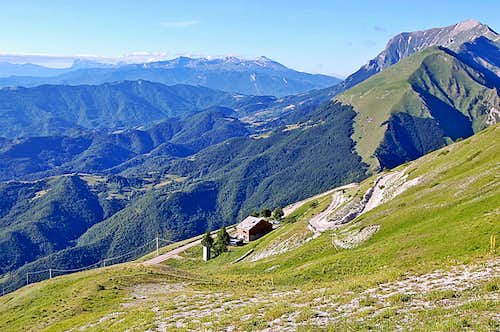 Looking past Rif. Sibilla to a distant Corno Grande 2912m. 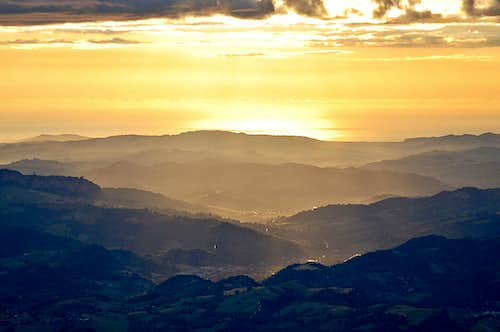 Sunrise view of Adriatic coast from Rif. Sibilla
A very pleasant 2 day excursion is to combine the ascent of Mont Sibilla with a visit to the ‘Gorge of Hell’ (Gole dell’ Infernaccio), below the northern slopes of the mountain. See below for a brief description of this gorge and for a few photos. I’d suggest a morning visit to the gorge - and then, in the afternoon, tackle the drive from Montemonaco up the series of hair-pin bends to Refugio Sibilla at 1540m. This hut is in a commanding position, high up on the eastern side of the long north-east spur of Sibilla. There are stunning views looking towards the Adriatic coast. In addition on a clear day, looking south down the mountain chain, it is possible to see the distant Corno Grande 2912m, highest summit of the Gran Sasso group – and highest of the entire Apennine range. The ascent of Sibilla from the Refugio is just a 4 hour round trip. Nonetheless I suggest leaving the hut early – to avoid the heat of the day, but also to catch the early morning sunlight for the best views.The path initially ascends gentle grassy slopes behind the hut, but then joins the crest of the long north-east spur of Sibilla at around 1760m. This is a beautiful spot if the weather is clear. The limestone/grass spur winds round and up towards the now visible summit of Sibillini. But directly in front slopes plunge precipitously straight down several thousand feet into the Gole dell’ Infernaccio – a spectacular sight.The path now turns left (south-west) along the spur and in a series of little steps and rises, ascends a further 300m to a particularly steep limestone step, where there are a few metres of fixed rope. This is at 2102m and just a short distance from the summit. The little step is just a scramble and the fixed rope barely necessary. However, with the back drop of the steep limestone slopes plunging into the gorge, some unused to exposure may feel a little nervous here.There is now an easy grassy amble up the remaining 70m height gain to reach the summit of Sibilla at 2173m. There are panoramic views of the Adriatic coastline from here, but now also of the spectacular ridges of the inner Sibillini. In the summer it is pretty. In the winter it could be sensational.From the summit, the path continues to follow the crest, which has curved round to point west now. Initially it is mildly exposed, being rocky and with significant drops on both sides for a couple of hundred metres. Gradually the ridge broadens and after about 30 minutes a small col is reached at 2129m. In June 2009 there was a large snow patch here. This is also a junction in the path. Straight ahead it is possible to follow the ridge along towards Cima Vallelunga and other summits. However, the main route now follows a 4WD track which heads east now, dropping below the crest of the ridge. After an hour or so of easy strolling, the hut is reached. 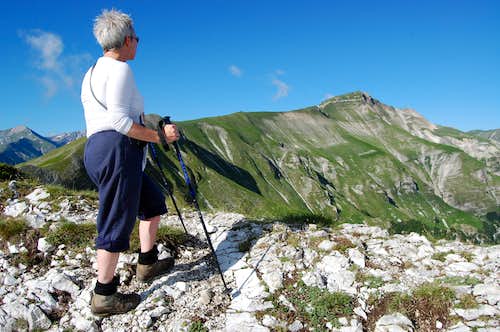 Joining the crest at 1760m, summit of Sibilla about an hour distant. 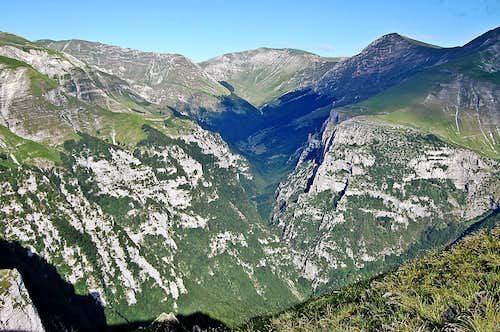 Looking down from Sibilla crest into Gole dell’ Infernaccio. 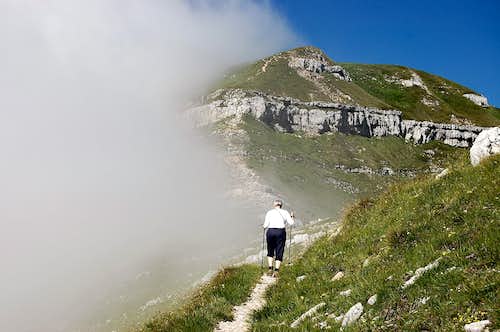 Approaching the rocky scramble near to Sibilla summit. 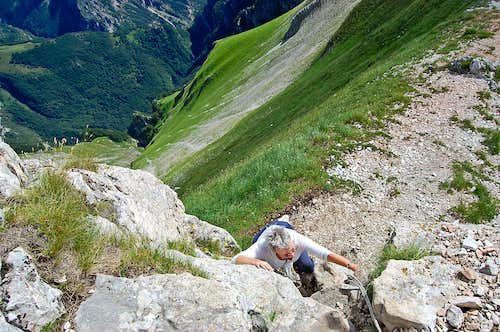 Fixed rope at the rocky scramble near to Sibilla summit 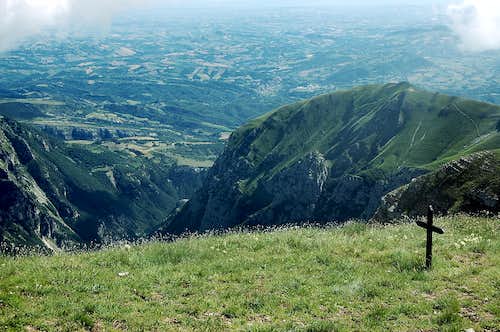 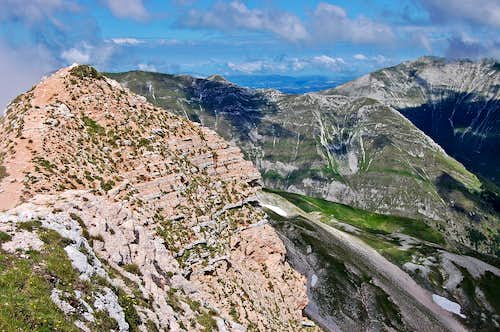 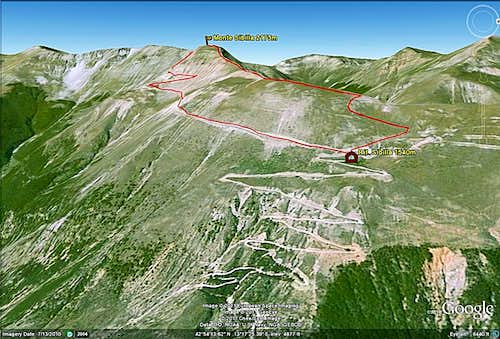 Google Earth image of Sibillini route
The Italian province of Marche and within it, the Sibillini National Park, is well served by no less than 3 airports: Rimini, Ancona and Pescara – all on the Adriatic Coast. There are bus and rail links to the main hubs of Amandola and Ascoli Piceno. Amandola has bus links with the villages of Montefortino and Montemonaco. See link to appropriate page on Sibillini National Park website below:How to get thereThe Refugio Sibillini is accessed via a steep hair-pinned gravel road, which in normal conditions is perfectly manageable with a 2WD vehicle. Naturally own transport is handy, but otherwise it may be necessary to hire a local taxi. 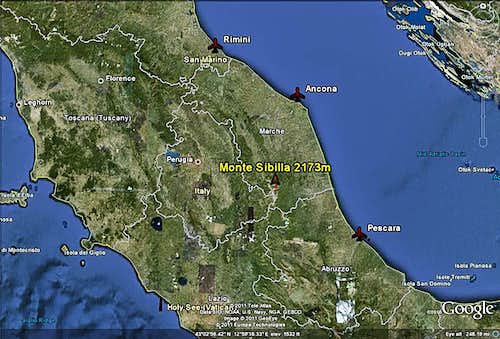 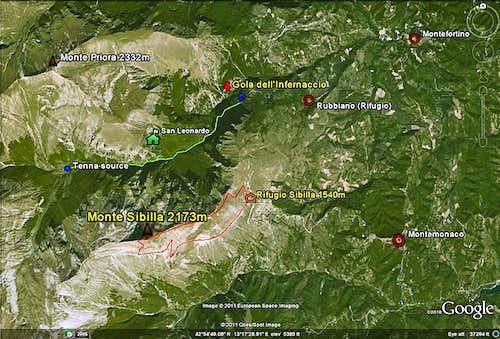 There are no permits required or fees to be paid to visit the park, climb the peaks, nor to visit the Gole dell’ Infernaccio. There are a scattering of visitor centres across the region where information can be obtained (see Sibillini National Park link below, under ‘links’). Naturally visitors to the National Park are expected to comply with normal common sense rules round conservation – avoidance of pollution, protection of wildlife and flora etc.Naturally it is recommended to leave word of where you are going and when you expect to be back. It is worthwhile carrying a mobile phone – although reception cannot be guaranteed in mountainous areas. The general number for emergencies in Italy is 113, but for mountain rescue soccorso alpino it is best to ring 118.

There are a few camping grounds scattered around the National Park, but they are few and far between. There is camping at Fiastra, to the north, by the Fiastra Lake (tel 0737 52295). There is a camp ground near to Monte Vettore to the south (tel 0736 807007) – or website Click here Most accommodation across the park is available in the form of hotels, guesthouses – and mountain rifugi. Note that camping up in the mountains is officially frowned on within the Park – but that discrete camping, setting tents up at dusk and taking down at dawn, is tolerated.

Situation and access is as above in 'Getting there'.This is a pleasant and well equipped mountain dwelling with beds for 35. There are two dormitories as well as some double rooms with basic en-suite facilities. There is restaurant service – and from my own visit in 2009, the food was excellent as well as reasonably priced. It is recommended to phone and reserve accommodation in advance and numbers for the Rifugio are as follows:Tel/Fax 0736 856422Guardian Mobile Nos: 338 4292399/338 4695073 (Angelo Tuccini).Rif. Sibilla website - see link below:All the mountain refugios in the region tend to be open from mid-April to mid-October. 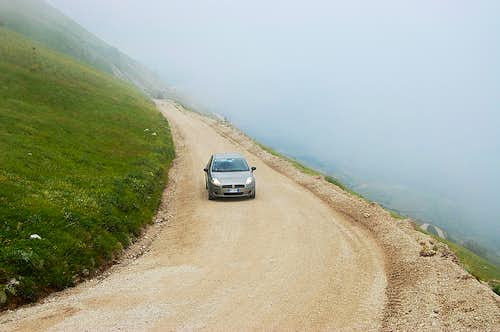 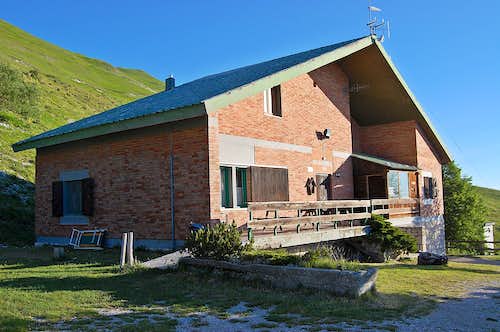 Le Marche websiteAn excellent guide-book for the region is the Cicerone Guide by Gillian Price: ITALY’S SIBILLINI NATIONAL PARK. I used this guide when I visited Gole dell’ Infernaccio and climbed Sibillini with my wife in June 2009 – and I have referred to the text in creating this page. 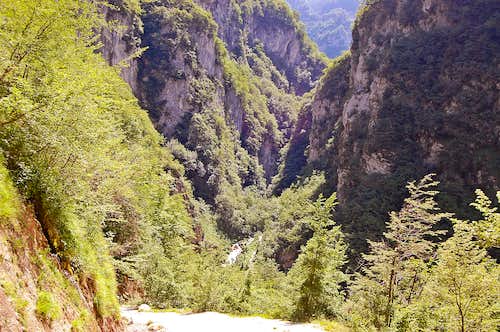 Entrance to Gole dell’ Infernaccio from the car-park. 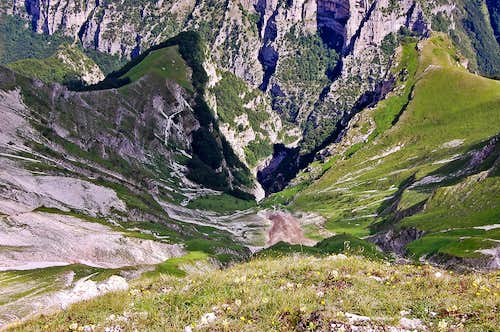 Gole dell’ Infernaccio from above (from Sibilla east spur)
This pleasant gorge is on the northern side of Monte Sibilla – and has been created by erosion from the passage of the river Tenna. It is a popular outing in the region – and could provide a good half days walk to do prior to taking the drive up to the Rifugio Sibillini.The start of the gorge is a car park about 1km to the west of the tiny hamlet of Rubbiano. NOTE – as of June 2010, there is allegedly now a new Rifugio open at Rubbiano. This has 12 beds and a small kitchen. From the car park the gorge starts at a narrowing between towering limestone cliffs, heading initially south-west – and under a curtain of a waterfall and then across the river at a footbridge. After an hour or so there is a fork in the track – and it is possible to make a detour up a couple of hundred metres of hillside to the little church of San Leonardo.From the fork onwards, the route criss-crosses the cascading stream as it rises through lush undergrowth with a few wild flowers. Although described as the gorge of hell, it is perhaps some people’s description of heaven!The end of the gorge walk comes about 5 km out from the car-park, at the point at which the river Tenna emerges from a spring. A track does continue west from here however, towards the distant Passo Cattivo – and the main valley curves south towards Monte Porche. 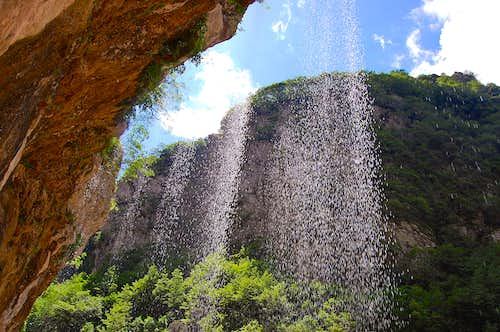 Initially the gorge walk passes under a waterfall curtain. 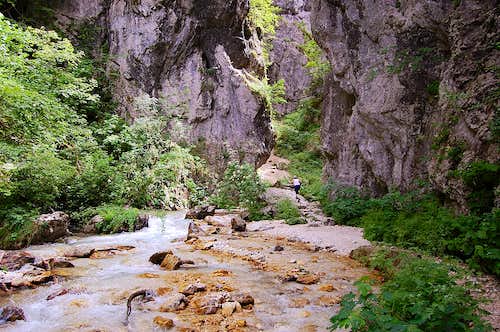 In the depths of the gorge. 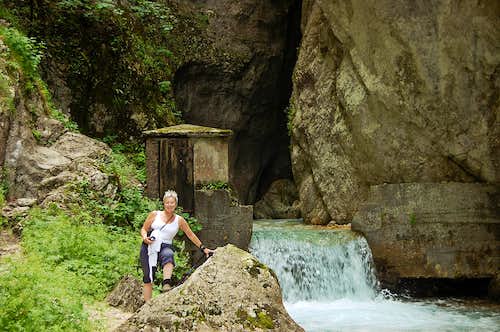 At the source of the River Tenna, at the end of the gorge walk. 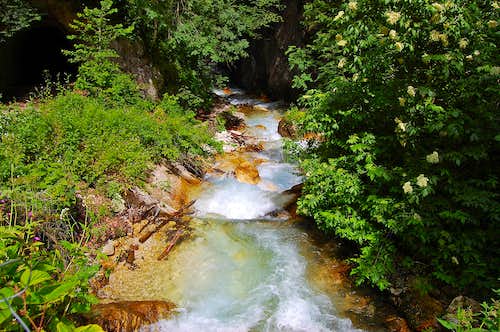 Although described as the gorge of hell, it is perhaps some people’s idea of heaven!