Near the border between the provinces of Trento and Brescia, along the ridge between the basin of Tremosine and Val di Ledro, we find the small Catena del Tremalzo, not very extensive and wild, which includes the Corno della Marogna, the nearby Monte Tremalzo 1972 m and some minor peaks. The whole small group belongs to the Prealpi Bresciane e Gardesane. Together with the nearby Corno della Marogna, Monte Tremalzo forms a couple of important summits, touching without reaching the 2000 meters in altitude, and exceeded in altitude only by Monte Caplone, also located within the Parco Regionale Alto Garda Bresciano, an impervious and scarcely anthropized area where the mountains often require long approaches. The climb to Monte Tremalzo starting from the homonymous Tremalzo Pass, on the contrary, is short but very profitable, also due to the vast and wonderful panorama visible from the top of the mountain. The ascent can be done all year round, even in winter with the use of crampons or snowshoes depending on the snow conditions.

The climb to Monte Tremalzo starting from the homonymous Tremalzo Pass, on the contrary, is short but very profitable, also due to the vast and wonderful panorama visible from the top of the mountain. The ascent can be done all year round, even in winter with the use of crampons or snowshoes depending on the snow conditions.

From Riva del Garda we follow the state road leading to Val di Ledro through two long tunnels. After the village of Biacesa the road reachs the Lago di Ledro near the village of Molina di Ledro. The road runs along the northern shore of the lake, reaching Pieve di Ledro, then Bezzecca, Tiarno di Sopra and Tiarno di Sotto. We are finally at a second tiny lake on the left of the road: it is the Lago d'Ampola, a protected biotope due to its particular flora and fauna. Immediately after the pond we leave the main road, turning left at the signpost "Passo Tremalzo". The road rises with several hairpin bends reaching the Passo Tremalzo in little more than 10 kilometers. Just over the pass near the Rifugio Garda 1702 m. the road is closed to the motor vehicles. On the right we can leave the car in a large parking lot.

A short but interesting climb, especially in winter, also due to the vast summits panorama. The winter climb requires the use of an ice axe and crampons. 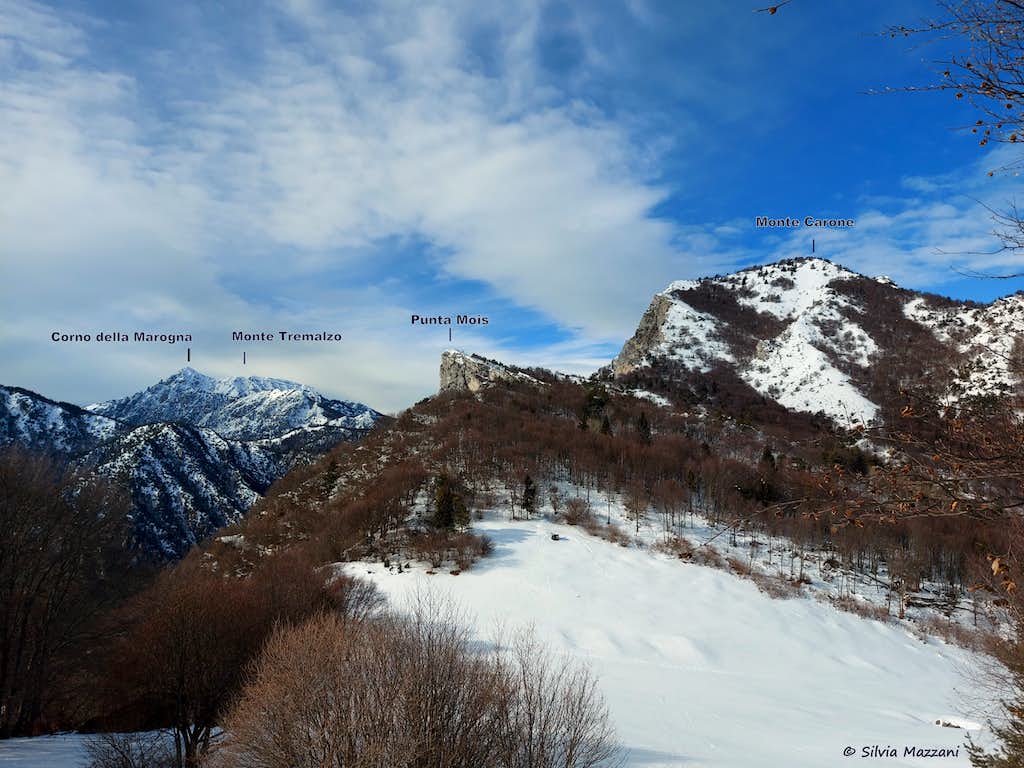 The start takes place from the car park near the Rifugio Garda. On the left side of the road and on the left of the refuge, take the track that goes up along the ridge in the North-East direction and follow it first uphill, then for a short flat stretch until you reach the base of the steep SW slope of the Tremalzo, with rocks and pines emerging.

Climb the ridge, first keeping to its right edge with a serpentine path, between snow, pines and rocks, then aiming progressively in a slight oblique to the left with a steep climb to avoid rocky jumps. In this way you reach the top of a small forerunner in sight of the summit, from where you take the wide panoramic ridge, paying attention to keep the distance to the frames often present and projecting on the rock wall. With a short ascent you reach the panoramic summit where a cabin with a radio bridge of the Fire Brigade is located.

The panorama on the horizon is wide:  to the West on Adamello and Presanella, to the North on the Brenta Dolomites and to the North-east on the Western Dolomites and Lagorai, to the East on Pasubio and Piccole Dolomiti. The main mountains of the Gardesane Prealps with lakes Garda and Ledro are closer.

No fees no permits required. Pay attention that cars are not allowed beyond the Garda Refuge

All year round. Winter ascents requires snowshoes or an ice-axe and crampons in the presence of ice.