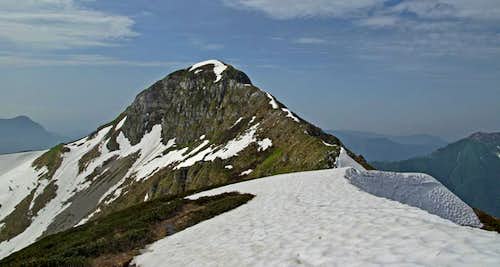 Monte Verzegnis is one of the most popular summits of the NE part of the Carnic Prealps, probably because it’s quite easy to climb and its summit offers a wonderful 360° panorama, one of the best of the area. It’s situated among the river Tagliamento, the Val di Preone, Sella Chianzutan, the villages of Verzegnis and is the highest mountain of a small ridge composed by 4 other main summits: Monte Rizzat ( 1441 m ), Monte Cormolina ( 1880 m ), Monte Lovinzola ( 1868 m ) and Colle dei Larici ( 1779 m ). This area of the Carnic Prealps is very different from the western part, well known for its picturesque dolomitic mountains, is mainly composed by beautiful green mountains cut by deep and wild valleys, very rich of alpine flora and fauna.

The name of the mountain means “uncontaminated area”, and fortunately the name still fits for this beautiful mountains and valleys.

From the summit of Monte Verzegnis you can enjoy a very broad view of the Carnic Alps, but also of the Dolomiti, the Julian Alps, the hills and the plains of the Regione Friuli Venezia Giulia and if the sky is clear the Adriatic sea in the background. 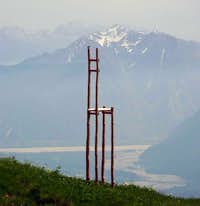 
This area is well known not only for the beauty of this green mountains but also for a famous quarry of red marble ( closed a few years ago ) on the north-west side of Monte Lovinzola, for the deep caves discovered in the last years ( so far 42 caves have been found by spelologists, and the most interesting one is called “Magico Alverman”, 1308 m long ), for the lovely emeraldine lake of Verzegnis and for a very interesting car race ( Verzegnis-Sella Chianzutan ) that every spring attracts a lot of people from all the north-east of Italy and from Austria and Slovenia. In winter Sella Chianzutan is also known as a small ski-resort, with two ski tracks for alpine skiing and two for cross-country. 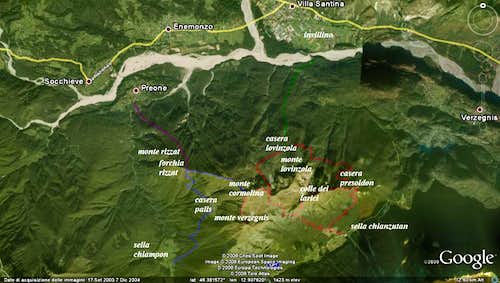 There are several possible approaches to climb Monte Verzegnis, although the most used is by far the route from Sella Chianzutan. All the routes can be climbed by hikers.

1) From Sella Chianzutan: Park your car in the big parking space of the Albergo Chianzutan, cross the road and then take the path 806 well indicated by a sign. Go up to Casera Mongranda and then take the path that goes up behind it on the southern flanks of the Colle dei Larici. Then you enter first in the small valley between Monte Lovinzola and Colle dei Larici and then in the beautiful amphitheatre of the Malga Val. From there you have just to go up to Forcella Cormolina and then turn left following all the north ridge of Monte Cormolina and Monte Verzegnis until you reach the top of the mountain ( 2.30 hours, elevation gain around 1000 m ). Usually people don’t come back with the same path of the ascent but once reached Forcella Cormolina go down to the other side to Casera Lovinzola di Sopra ( same number of path, 806 ), Rifugio/Casera Presoldon ( path n°809 ) and then to Sella Chianzutan, closing a very interesting ring around the group ( that can be done in both directions, around 5 hours ). Another option is to climb after Monte verzegnis also Colle dei Larici ( beautiful the views also from this mountain ). In this case you have to go back to Casera Val and to the southern side of the group until you reach a crossroad ( indications for the teleferica and Colle Dei larici ). From there you go up to the abandoned ropeway station and to the summit of the mountain. Then you have go down on the other side to Sella Chianzutan ( 5/6 hours ).

2) From Villa Santina: from Invillino, you cross the river Tagliamento and then you park your car near the Stavoli Mazzoleni. From there you take the path n°806 to Casera Lovinzola di Sotto, Casera Lovinzola di Sopra, Forcella Cormolina and to the summit of the mountain. Much longer ( at least 4 hours only for the ascent ) and with more elevation gain ( around 1500 m ), so not advisable. 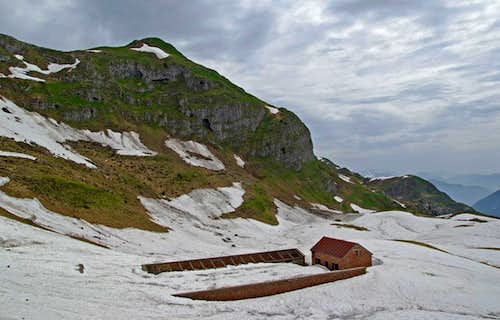 3) From Preone: from the small village of Preone you take the path 804 that goes to Forchia Rizzat. From there you have to follow all the NW ridge of Monte Cormolina until you reach the summit of the mountain. From there with the same path described before you reach the summit of Monte Verzegnis. This path is also very long and not advisable.
4) From Sella Chiampon: On the road of the Val Preone, just before Sella Chiampon, there’s a cart track ( path n°807 ) that goes up towards north-east to Casera Palis and Forchia Rizzat. Then you have to follow the path described before on the ridge of Monte Cormolina. 3/4 hours to Monte Verzegnis. 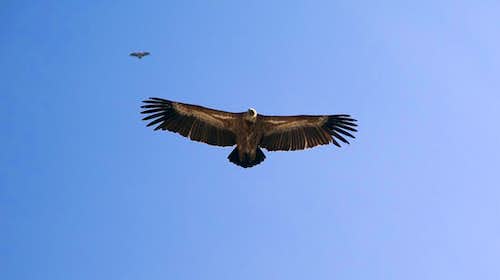 Sella Chianzutan ( indications for Verzegnis ), Preone, Villa Santina and Sella Chiampon ( indications for Ampezzo ) can be easily reached from the town of Tolmezzo that is situated very near the A23 Udine-Tarvisio motorway ( exit Carnia ) and the main road n°13 “Pontebbana”.

Other summits of the group 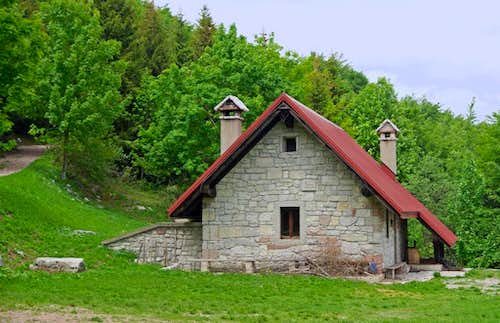 There aren’t mountain huts in this area but you can find two beautiful Casere/Bivacco on the eastern slopes of Colle dei Larici ( Casera Presoldon ) and on the northern slopes of Monte Lovinzola ( Casera Lovinzola di Sopra ) recently renewed that are always open if you want to spend a couple of days in the area for a short trek. They can be also a winter goal for a snowshoes hike.

Hotels in the area

The best season is from May to November