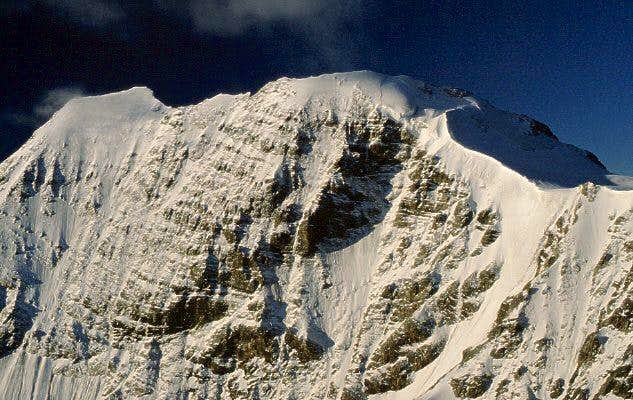 "Monte Zebrù" is situated almost in the ORTLES CEVEDALE GROUP, in exact the middle between the popular summits "Ortler" in the north and "Gran Zebru/Koenigspitze" in the southeast. It has two summits: northwest summit (3735 m) which is more often visited than the lower southeast summit (3724 m). Both summits are connected with a snow covered ridge.
Ascending "Monte Zebru" is quite easy on the normal route (onto the nortwest summit) and is also done in winter on

FROM MILAN BY TRAIN AND BUS: take a train in the Milan Central station destination Tirano and then a bus to Bormio (4 hours).

FROM SUDTIROL BY CAR THROUGH STELVIO PASS: from Bozen (Alto Adige on the highway between Innsbruck and Verona) to Merano by main route and the by local route through Venosta Valley follow the signals to Stelvio mountain pass (2700 meters, the highest mountain pass reaching by car, open only in the summer period). From here to Bormio (3 hours and half from Bozen, Stelvio pass requires 44 bends to go up and 15 to go down).

FROM SAINT MORITZ (CH) BY CAR: go to Pontresina and then follow the signals to Bernina pass. Turn left when you look the indication to Livigno (I) through Forcola pass (open only in summer period) and then from Livigno through Foscagno pass (2200 meters, open all the year) to Bormio (3 hours).

FROM SANTA MARIA (MUNSTERTAL - CH) BY CAR: follow the signals to Giogo di Santa Maria (Pab Umbrail) on the border between Switzerland and Italy and then to Bormio (1 hour and half, border near Stelvio pass, open only in the summer period).

From "Bormio" take the road eastwards to "Passo Gavia". After about 3 km you enter the small village "San Antonio". At an open space (like a market place) there is a junction to the left and a signpost indicating "Rifugio Alpini". If you are coming from "Passo Gavia" you have to be careful not to miss the junction (this time to the right :-), because from this direction you can't see the signpost!
Follow the small winding road with a lot of bends up the hill until it ends in "Niblogo". There is a parking site and the trail to "Rifugio Alpini" starts.

The trail to "Rifugio Alpini" is a very long and strenous hike, about 5 hours and 1350 meters height!
There is also jeep transport available. The jeeps are waiting at the parking site for customers and are charging 10 Euro per person for a one way trip. But contrary to the information in the guide the jeeps aren't going up until to the morain but only to a picnic site at about 2300 m. So it is still a 1,5 hours hike up to the hut.

Best time to climb "Monte Zebru" is in summer period, when the "Refugio Alpini" is open. When the alpine hut is closed it is much harter because you have to carry all the things you need for bivoucing.
In winter you can climb "Monte Zebru" using ski and using the bivouac hut "Citta di Cantu" for staying overnight.

Advice by "Pini":
You have to be careful crossing the "Zebru Ferner". The glacier and all the surrounding area was a theatre of war during World War I. That is why there is still a lot of material lying on and in the ice. The glacier is literally covered with old fuses and also a lot of other stuff can be found.
When we crossed the glacier we found an old shell (about 12 cm diameter, 30 cm long). When we excitedly informed the warden of the hut about our discovery, she just laughed and told us that that's not unusual but happens all the time!
Well, it's no problem when there is no snow on the glacier (so you can see what you are walking on) but I wouldn't like to step with my crampons onto the shell when there is a thin snow cover! (I think mountaineer should die falling into crevasses or by a torn rope but not by being torn to pieces by an old blind shell! Well, just kidding :-)

The "Refugio Quinto Alpini e Guido Bertarelli" or shorter "Refugio Alpini" (2877 m) from the Italian Alpine Club (CAI) is the "Base Camp" for ascents onto "Monte Zebru". It's located direct southwest under the summit and on nice days you can see the climbers at the summit without binoculars. The hut offers 60 sleeping places in two different buildings and is open from end of June to mid-September.
Tel.: 0342-929170
Staying in the "Refugio Alpini" is quite expensive - half pension in summer '02 was 35 Euro! Beds were okay, the evening meal (3 courses) not bad, but breakfast was lousy!
Just an advice: if you are in the area you should visit "Refugio Branca" about 15 km southeast - it offers the best meals by far! I haven't been there - but a lot of friends and partners all told the same: "Go to Branca and eat til you burst!" :-)

Located on resp. near the ascent onto "Monte Zebru" is the fixed bivouac "Bivacco Citta di Cantu" (3535 m). It's located north of the summit at the "Hochjoch" and painted in bright orange. It offers 9 sleeping places on fold out beds, is equipped with the most important things for an emergency and was very tidy when we visited it in July '02. (After our visit it was still tidy :-)
The bivouac hut is mainly used for ski mountaineering in winter.

To have a look at the weather and snow conditions in the "Ortler" area to which "Monte Zebru" belongs ( and to see the chaos at the "Stilfser Joch" pass :-) the webcams at "Stilfser Joch" are very useful:

View from Stilfser Joch onto Ortler. I am not sure if you can really see "Monte Zebru". It should be a bit to the right of "Ortler" summit.

View from Stilfser Joch towards northeast into Trafoi valley. In the background you can see the Oetztal alps.

This webcams shows Stilfser Joch pass facing to the east. In the background you can see "Ortler" summit.

This webcam shows Stilfser Joch pass facing to the west.

The following guide book (in german language) and the map should be essential if you would like to do some hiking or climbing in the "Ortler" area.

There is an old guidebook in english, in the "West Col alpine guides" series "Ortler" (early seventies...might be newly printed...)

Addition / correction: The Bivacco Città di Cantù is actually dismounted! It is planned by the alpine Club section of Cantù to rebuild the bivvy shelter in the near future. It was planned for summer 2015 but in the beginning of August, 2015, there were no such activities seen.