Sardinia's highest mountain range, the Monti del Gennargentu, is a very lonesome region, which has only one access road between the mountain towns of Fonni and Désulu. Far from being very rugged, the mountains resemble green hills, barren of almost all vegetation. The timberline reaches some 1400m which is very low for a mediterrenean island, located around 40° latitude (in fact the 40th parallel cuts through the range between the highest summits). The reason for the barrenness lies in the fact, that in the 18th and 19th centuries most of the oak forests of the island were cut down to produce something as prosaic as - charcoal.

Today only the remnants of charcoal kilns and old mule trails - mulaterias -tell of this history. The mulaterias serve as hiking trials, especially near the coast, where the limestone rocks of Supramonte and the undergrowth otherwise would block every way. Some of the trails follow ingeniously constructed paths into the coastal gorges. The Baccu Maore Gorge is one example.

All of Sardinia's highest mountains are located within a small area at the centre of the Monti del Gennargentu. The ridge that connects them forms a half circle, open to the west. Except for the southern coast, the whole island can be seen from the ridge, sometimes - on very clear days - the view reaches Corsica to the north and the Italian mainland to the east.

The name: it derives from the saddle Arcu Gennargentu - silver saddle, named like this because the Gennargentu Ridge is more or less the only place on Sardinia, where you can encounter snow in winter. The northern slopes of Bruncu Spina even host a ski lift with two downhill courses.

Due to its remoteness the range is home to small herds of mufflons, but you have to be very lucky to see these reclusive animals. Also golden eagles and bearded vultures are said to patrol the air. I assume that they live further to the south, near Riu Flumendosa, since there you can find very isolated and lonely spots.

Loneliness of course is relative. You won't find many people living (or making a living) in the Gennargentu area. But as highpoints go - the ascent to Punta la Marmora is very popular with all kinds of hikers. Sometimes they come by the busload! The ascent is relatively easy. There is a maintenance road for the upper Bruncu Spina ski lift station and following this road you'll reach Sardinia's second highest summit. The ridge crossing to Punta Paulinu is also very easy but further to the south you have to descend to Arcu Gennargentu and afterwards climb to the ridge between Punta su Sciusciu and Punta La Marmora, a saddle called Genna Orisa (at 1782m).

Finally the flora is somewhat "retarded". It definitely has alpine character. The barrenness of the range and high winds keep the plants low and you'll only find very small plants (flowers and bushes) which hug the ground. 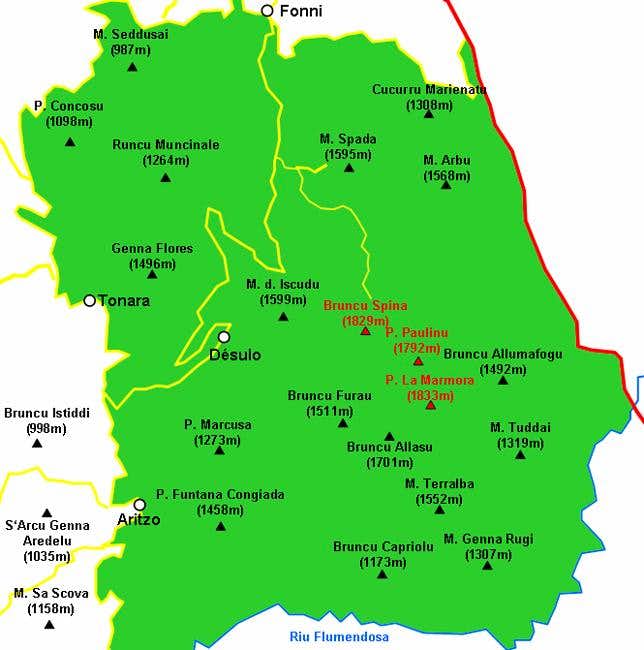 Bruncu Spina is Sardinia's second highest mountain - and the only one to boast a ski lift and two (!!) downhill courses. See the Bruncu Spina page for more details.

Though the lowest of the five Sardinian highest mountains, it is the most "spectacular" one with fine scrambling passages. See the Punta Paulinu Page for more details.

Only slightly lower than Punta la Marmora, Punta su Sciusciu is separated from Sardinia's highest summit by the island's highest pass, Genna Orisa, at 1782m. The mountain appears as a 'notch' in the Punta la Marmora pictures.

Sardinia's highpoint and the reason why you'll find a lot of people on the Gennargentu main ridge. See the Punta la Marmora Page for more info.

Punta Florisa and Punta su Sciusciu have exactly the same height. Both are barely separated from Punta la Marmora. Therefore there is only one picture of Punta Florisa.

Sardinia can be reached either by plane or by ferry. The main ports are Porto Torres and Olbia in the north and Arbatax and Cagliari in the south. Airports are at Alghero and Olbia in the north as well as (again) Arbatax and Cagliari in the south. For exploring the north eastern part of the island where most of the mountains are the best entry point is Olbia, which is where most flights go anyway. Arbatax is possible as well but it is a much less frequented air-/seaport. Still the distance from Arbatax is much closer so that both itineraries will follow here.

There is only one reasonable trailhead. As you can see from the Gennargentu overview map the range can only be reached by one road which starts right between Désulo and Fonni.

Approaching the mountain from Arbatax airport
From the airport take SS125d west towards Tortoli and onwards on SS198 to Lanusei. There switch to SS389 north direction Nuoro until you reach Passo di Caravei. At the pass turn west again un SS389, direction Fonni. Shortly before you reach the town SP7 (a small side road) turns off left (south) and leads in direction Désulo. After 5km turn left (signs Monte Spada, Bruncu Spina). 7km will lead you to the trailhead which is not at the end of the road at the ski lift but rather some 1km before, where there is a dirt road to the right and a parking place to the left.