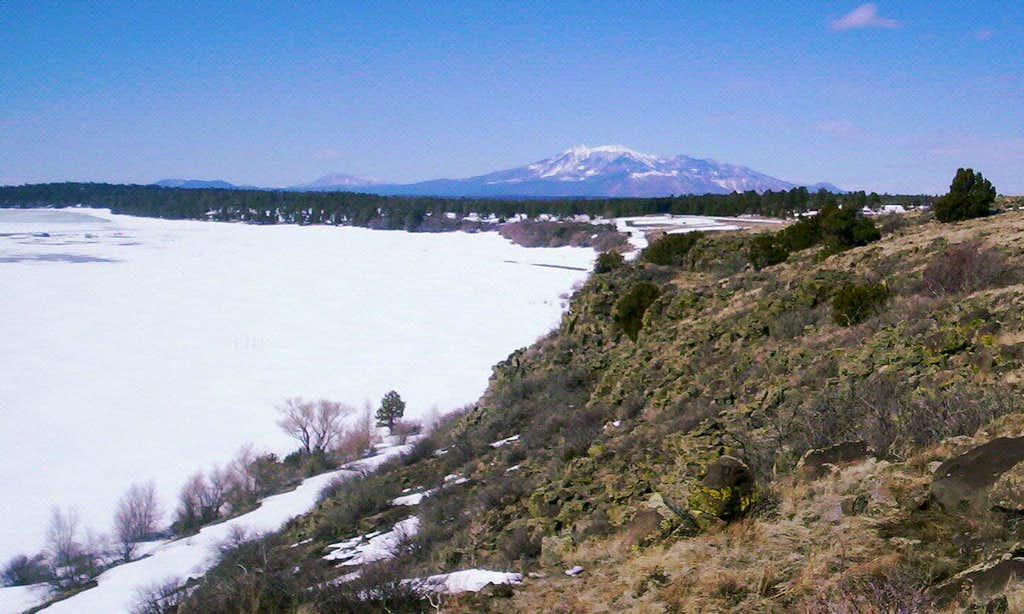 This is a level hike that goes along the shore of Mormon Lake, just south of Flagstaff, Arizona. Almost ALL of the year, Mormon Lake is more a MARSH than a lake. When full, after the spring snowmelt, it is the LARGEST NATURAL LAKE in Arizona. Although there is no dam (in contrast with Upper and Lower Lake Mary), humans have still influenced the lake. The area was first settled by Mormons, who started dairy farming here. In pioneer days, the lake was never more than a marsh, and the settlers ran cattle on the rich forage. Eventually, the hooves of the cattle compacted the soil and made it less porous, so that the marsh flooded and became a lake in wet years. Today, the lake and its marshes are havens for wildlife, including Rocky Mountain elk, raptors such as bald eagles and various waterfoul. This hike is best done at sunrise and sunset, which are good times for viewing wildlife. Fremont Cottonwood, Colorado Pinyon pines and Quaking aspen trees grow here in an unusual association, and there are fine views of the San Francisco Peaks to the north. Yes, those are the snow-covered San Francisco Peaks in the distance. March 3, 2008
« PREV NEXT »

Just noticed this one... very cool shot from an area not most folks go to!

Yep, I only post a few photos at a time,
but a few of them get helplessly buried
beneath the pile. Lots of water in Mormon
Lake and Lake Mary this year for the elk!