0. General. From 1500 m (if starting in Riedingtal, otherwise lower) to 2680 m, exposition towards west ans north-west. First by the road, then by a comfortable path to Franz-Fischer-Huette and through Zaunerkar. From Windischscharte to the SW face entry a weak, not abundantly marked path. The last 100 m a medium hard ferrata (On Austrian scale A/B). Gear: Good shoes and poles.

See the main page of Mosermandl how to get to Riedingalm, 1500 m. 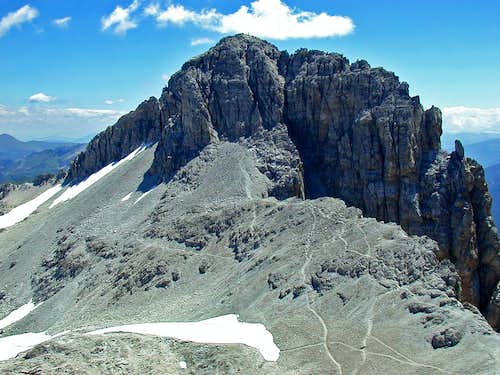 The NW face of Mosermandl
From the parking place by the lake we continue by the valley on foot (or using a tourist bus?). After Untere Esslalm, on some 1560 m, towards the right (NW direction) a good marked path deters, going to Franz-Fischer-Huette, 2018 m. We reach the hut in some 2 h altogether.

From the hut we continue by the eastern shore of Zauner See (lake). A still good, marked path leads us towards the NW into Zaunerkar. In the upper part the basin gets filled with stone blocks, the last part of the ascent on Windischscharte, 2304 m, is a bit more steep. Till here also paths from the North come.

On Windischscharte we turn right. Now a steep section awaits us, over gravel and rocks a weak path will bring us on a small plateau NW of Windischkopf, 2609m. We don't go on the top of this side-summit (even if it offers a nice view on Mosermandl), but continue by a weak, still marked path around the northern slopes. When coming around we are on the upper part of the broad karst plateau, called Gasthofkar (also Raucheneckkar). Gaining altitude slowly all the time, we go on the saddle between Mosermandl and Windischkopf. A good trail leads into Mosermandl's NW face.

Now the real climb begins. It is a short, medium hard ferrata. Good protected, with some nice passages in a steep ravine, on its top almost a chimney. The ferrata brings us just on the highest point.