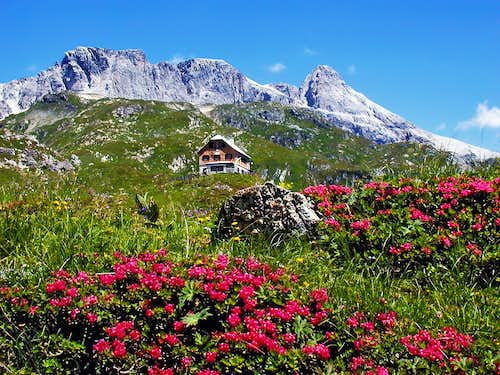 flow - descending towards the S

Mosermandl is one of the most important peaks of Radstadt Tauern, a unique and very interesting group of Niederer Tauern, belonging to the Eastern part of Alps. Because the upper parts of these mountains are made of limestone they are due to their sharpness very picturesque. We have a feeling like being somewhere in Dolomites. It is also interesting, that north from the Mosermandl peak there's a broad carst plateau.

In this mountain group there are many well maintained marked paths and also Mosermandl can be accessed by some of them. That is why it is often ascended, the other reason being the Franz Fischer Huette with its beautiful position near the lake (Zauner See). The easiest ascent is by a marked route, on the upper part a cable route, which needs some experience and reliability. 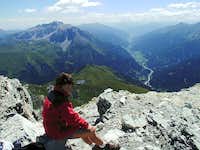 From Mosermandl there is a beautiful view towards the S and SW on the glaciers of the Ankogel and Grossglockner group, tovards the N on Northern Alps and towards the E on the whole sea of Nieder Tauern peaks.

The Lord of the Moss Story

Where today Mosermandl mountain proudly rises to the sky, hundreds of years ago there was a big, treacherous peat bog, where one would helplessly sink. Nobody dared to that area, only now and then a poor animal strayed there and perished. And, in addition, also an evil spirit operated there. His name was the "Lord of the Moss". He was very powerful, but also good-natured. If from the adjacent pastures an animal strayed in the bog, a shepherd needed only to call: "I kindly ask you Lord of the Moss, to bring my animal back here across!" And the animal was brought back healthy. One should just not forget to thank thereafter with the saying: "Oh, Lord of the Moss, thanks a lot, find food and some drink on the usual spot." And you put a snack in front of a hut. But if one forgot to do so, the animal disappeared forever.

Occasionally people on pastures were able to observe the little man when he came to the snack, and then they often said: "The Moss-Mandl (Moss-Guy) was back there." But they did not know that the "Lord of the Moss," could not at all stand the name "Moss-Mandl". The usually good-natured little man almost burst of rage, hearing that name.

Once a new shepherd came on the pasture. He soon heard the strange stories of "Moss-Mandl," and how to behave when the animal wandered into the bogs. And indeed, soon one of the animals he should be guarding, had disappeared in the bog. In his excitement he forgot how the "Moss-Mandl" should be addressed. He called loudly: "Moss-Mandl, I'll give you a snack, If you bring my animal here back!"

Suddenly a violent storm began and all animals on the pasture were running with loud shrieks, directly into the bog where they disappeared. And from the bog such a loud voice came, that the whole area was shaking: "Miserable worm, may your animals and you by my storm become a rock true!" Hardly the voice had died away, as the marshes started to boil and the Lord of the Moos arose out in his giant form. In his arms he held all the captured animals. Also the shepherd was lifted by his giant fist, and he felt like he suddenly became very stiff and cold. The Lord of the Moss and his prey were transformed into a mighty rock mass. Because of its origin people called it "Moss-Mandl. Over time that evolved to the present "Mosermandl". 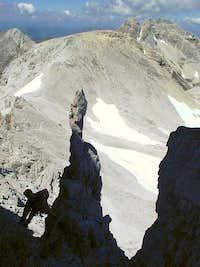 On the NW ferrata 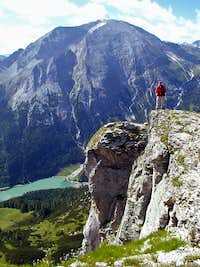 On the south ridge of Mosermandl

I can warmly recommend southern ascent and then descent towards the north-west face, over Windischkopf to Windischscharte and back down to Zauner See and Riedingtal. It's a beautiful one day tour. You can see a detailed map also on: http://www.austrianmap.at/. 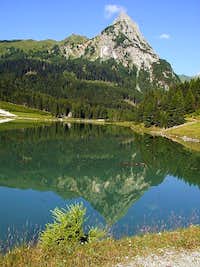 The base of Mosermandl is accessed by the highway Villach - Salzburg (A-10). Driving from the south, you leave the highway after the Katschbergtunnel, take a local road to Zederhaus and proceed towards the northwest in the Riedingtal to the parking place on Schlierer Alm (1495 m). For the last few kilometers you have to pay 8 EUR toll (2002), in the price the bus tour is included (which you dont't need anyway). During summer holidays to Schliereralm you can get also by bus. The other possibility to start a tour is the parking place at the northern entrance of the Tauerntunnel. You can also take a bus to the Gasthof Alm. In this case you reach the summit from the north.

Besides the road toll (8 EUR) on the south approach there are no limitations.

Mosermandl is most often climbed in summer and fall. The best months would be July to October. It can be reached in winter conditions also, but then the ascent is much more difficult. The region around is also nice for ski touring, in good conditions you can ski from just some hundred meters below the top of Mosermandl itself. 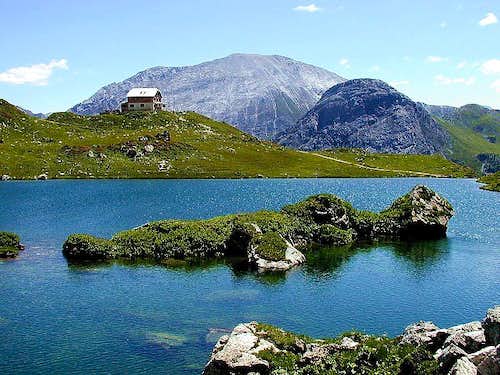 In the neighbourhood there are three mountain huts, opened in summer: