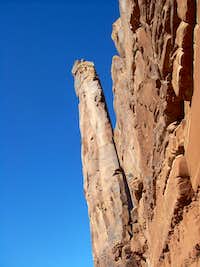 Moses
Island in the Sky is a 6000’ high mesa in Canyonlands National Park to the west of Moab, Utah towering over the Green and Colorado Rivers. This section of Canyonlands is home to the most infamous of desert towers, the most notable of which are Moses, Zeus, Washer Woman, Monster Tower, Standing Rock and the Witch. The extreme temperature range in this region is one of the widest in the world at -25F to 115F. My first climb there was In Search of Suds, a stellar route up Washer Woman. My second was the ultra classic Primrose Dihedrals up the southeast face of Moses, perhaps the most prominent of all towers in Canyonlands, located in Taylor Canyon. Both of these climbs offer remote climbing experiences where on many occasions you are likely to have an entire tower to yourself and possibly an entire canyon as well. For these reasons as well as considering the climb itself, Primrose Dihedrals makes for one of the best adventure desert climbs in North America. 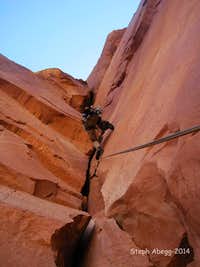 4th Pitch of Dunn
Moses is the tallest of the towers in Canyonlands National Park. Moses was first ascended by Fred Beckey and company in 1972 (via a lot of direct aid) on a line later named Pale Fire, IV, 5.12c. This line on the left side of the north face is the most common rappel line from the summit. Jim Dunn, Stewart Green and others made the second ascent of the tower in 1973, the Dunn Route, IV, 5.11. It was freed in 1982 by Jeff Achey and Glenn Randall. The Dunn route climbs corners on the right side of the north face. Ed Webster and Steve Hong made the first free ascent of Primrose Dihedrals, IV, 5.11d, in 1979, actually utilizing this climb to introduce camming devices to the desert tower climbing community. This is the only published route (2009) on the south side of the tower.

Head north out of Moab on US 191, turning left on the paved road heading for Canyonlands National Park (Island in the Sky). After 11 miles on a paved road that heads for the park’s visitor center, turn right on a gravel road marked for Mineral Springs Bottom. Do not make the mistake of turning rightt for Mineral Springs Point which is the dirt road that runs past the Horsethief Campground. Rather take the next right, .2 more miles down the road, on a gravel road heading for Mineral Springs Bottom. Follow this road for quite a distance until it finally dumps onto steep switchbacks to the bottom of the canyon. High clearance vehicles are highly advisable for this descent. Once down to the Green River, turn left for the sign marking Canyonlands National Park. This narrow dirt road follows the river for several miles to a campground along the river on your right and a marked sign telling you to turn left for Taylor Canyon. The Taylor Canyon road is much more primitive requiring even more of a 4x4 type of vehicle as it meanders along several washes for approximately five miles up canyon to the base of Moses where it dead ends. Follow a marked trail from the parking area as it ascends to the ridge line heading for the southeast edge of Moses. Follow the trail left for the north face routes, and right for Primrose Dihedrals.

There is a huge drop in climbing difficulty from the crux 4th pitch (5.11) on Dunn in regards to the rest of the route. The first pitch offers an easy, albeit chossy, dihedral that moves right to left to the base of a prominent corner/chimney system. The 2nd-3rd pitches combined make for one solid and fun pitch with mostly 5.9 varied climbing. As before mentioned, the crux 4th pitch offers a stout C4#4 off-width section up a dirty and sandy crack that pulls a small roof. The climbing after the roof cleans up considerably and offers more options in dealing with the remainder of the wide crack (arm bars, etc). The 5th-6th pitches can be combined to the top via relatively easy 5.8 chimney and face climbing. Dow

Primrose Dihedrals’ 7 pitches breaks down into five stout pitches at the 5.10 grade or more. Although Supertopo calls for eight pitches, it makes more sense to combine the final two pitches into one. A traverse first pitch can replace one of the 5.11 pitches making the entire route more of a moderate objective. This is a commonly used variation. Dow