Mount Alpenglow is the queen of Turnagain arm. The highest and most striking of the peaks that crowd right along the edges of the fjord, it sits among the Kenai Mountains on the fjord's south side. Desired by many, it is climbed by few: an average year might see two or three ascents. The most arresting feature of Mt. Alpenglow is the long west ridge, appearing perfectly uniform and level from afar. The mountain is climbed via a traverse of this wonderful, sharp ridge.

Climbing Alpenglow is an adventure that combines boating, bushwhacking, airy ridge-walking, and finally a scramble on some of the cruddiest rock this region has to offer (and that is saying something!). The bushwhack alone will dissuade many from this particular excursion. Let's suppose bushwhacks were rated like rock climbs, with 5.0 being open Rocky Mountain forest, 5.6 a good thrash through a Southern Appalachian "laurel hell," 5.10 one of those coastal Alaska alder thickets so dense that you are actually climbing through branches six feet above the ground--but you're not sure, because the ground is invisible under the devil's club ... on that scale, Mt. Alpenglow would offer you at least short stretches of 5.8.

To approach Mt. Alpenglow by road, take the Seward Highway (Alaska Highway 1) 70 miles south from Anchorage to milepost 56.3. Turn north onto the little-traveled Hope Highway and proceed exactly 7.1 miles (there are mileposts to help you) to a dirt road on the right. The dirt road is negotiable by two-wheel-drive vehicles. Take it, descending about a quarter of a mile to the shores of Sixmile Creek, where there is a turnaround and a raft takeout. Park here, being careful not to obstruct the area in a way that will interfere with raft trailers and rafts, as this is where commercial rafts pull out after running the Sixmile. 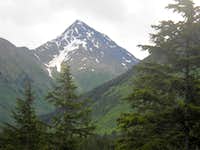 Mt. Alpenglow from Falls Creek
Your first task is to get across the Sixmile, which is a deep, fast-running river about 40 yards wide. At times there is a cable across the river here, and I have heard of people pulling themselves across using a harness and pulley arrangement. I don't recommend this because: (1) the cable is private; (2) the cable is in poor condition; (3) the cable is often completely absent; and (4) it is easy to get to the middle of a rusty cable, but quite hard to progress forward OR backward from the middle, and if you get stuck in the middle of this cable you will be very unhappy.

Instead, take out the canoe and life jackets you brought with you, and cross the river the old fashioned way. In most summer conditions this is Class I whitewater, and you shouldn't attempt it if you don't have some experience in a canoe on very swift water, because when your bow hits the main current things will happen fast. Your objective is the little pullout directly across the river. If you get swept downstream to the alder-choked bend below there, happy bushwhacking!

(This crossing is easier on the outbound leg than on the return. Coming back, you'll probably lose some ground to the current and have to land at a beach below the raft pullout, but fortunately there is a riverside trail you can use to get back to your car). 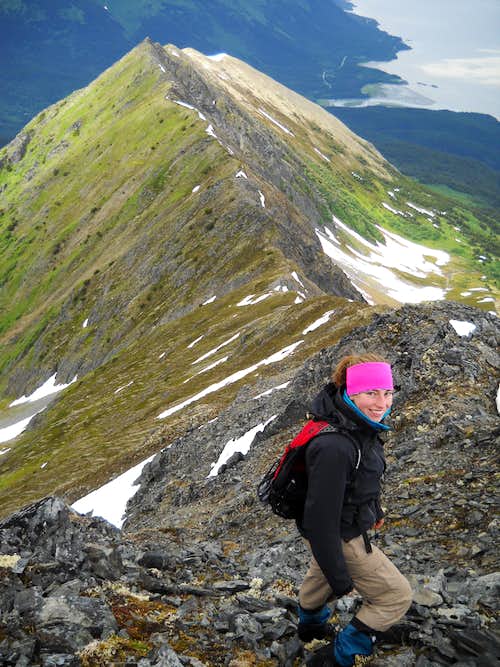 On one of the gentler stretches of the final climb, mid-summer. The "flat ridge" is below.
Once across the river, find a rough trail that starts just downstream of the cable and wends its way upstream along the east bank of the river. After about 300 yards, pick a likely spot and bushwhack east, directly upslope. (Do this before the slope disappears and the trail starts traversing a flat shelf above the river--if you get that far on the trail, you've gone too far). 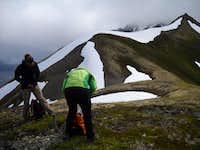 On the summit of Bradley Peak

Bushwhack east until you hit a ridge that has a steep drop on the far side into the Falls Creek drainage. Upper portions of this ridge have a good bear trail that you can follow. To avoid horrendous brush and deadfall, plot your route to stay among large trees where possible.

At 2000 feet, you will emerge into skunk cabbage meadows. A thousand more feet brings you into the tundra at the summit of Bradley Peak, 3007 feet, labeled "Falls" on some maps. This is about halfway to the top of Mt. Alpenglow in ascent time. Bradley Peak has a nice view over the old townsite of the Sunrise mining camp.

From Bradley Peak, another 400 feet of gentle ascent brings you to the flat ridge that is the unique feature of Mt. Alpenglow. Now begins one of the more delightful ridge traverses in this area, which will keep you happy for 30 minutes to an hour and may even make up for some of the bushwhacking you have just endured. The ridge is sharp but not knife-edged, and it has a goat trail that provides reasonable footing.

All good things come to an end, and eventually you will reach the steep, 1400-foot final step to the summit. This part of the climb has 45-degree snow with a dangerous runout in early season; later, it's a scramble over highly unconsolidated class 3 rubble, worse than average even in this very chossy region. It's similar to what's found on the regular route up Mt Alyeska. The climb can be done without significant exposure, but you'll have to use caution to avoid hitting your mates with rocks.

The first summit you reach--the west one--is the highest at 4816 feet. There's a summit register and, if you are fortunate with the clouds, a commanding view across the Kenai and Chugach Mountains. Turnagain Arm fjord is almost a mile below down the avalanche-swept north face; no other peak above the arm offers so high a perch so close to its shore. 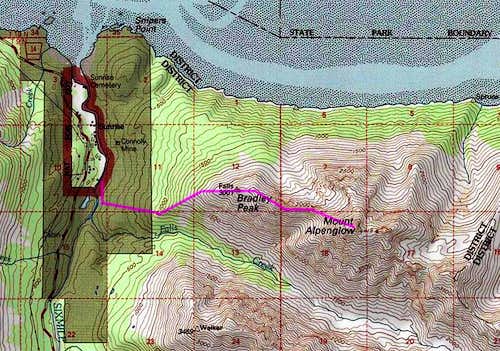 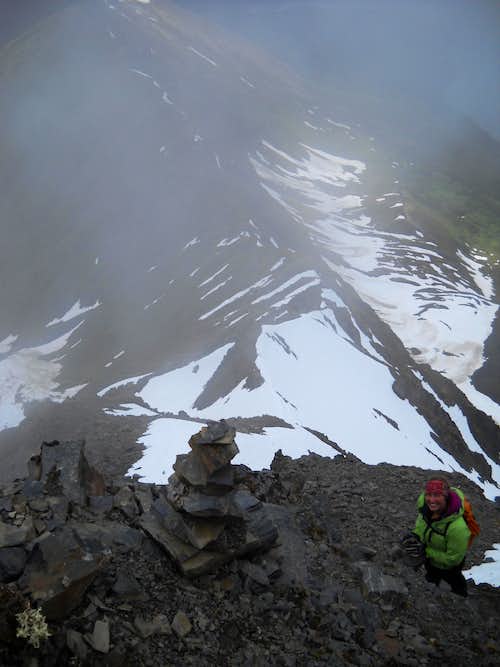 On the chossy upper west ridge

There are reports of a low fifth class line that has been done on the north side of the peak, accessed by boat from Turnagain Arm. A very long, high-level ridge walk from the mountains west of Seattle Creek also seems feasible.

Alpenglow sits almost entirely on lands of Chugach National Forest. There are no restrictions that would impede ordinary hiking or climbing. Camping is permissible (the only practical sites would be in the vicinity of Bradley Peak).

Avalanche Info for nearby areas

Vancouver Islander's Bushwhacking Scale (Alpenglow is B3 and B4) 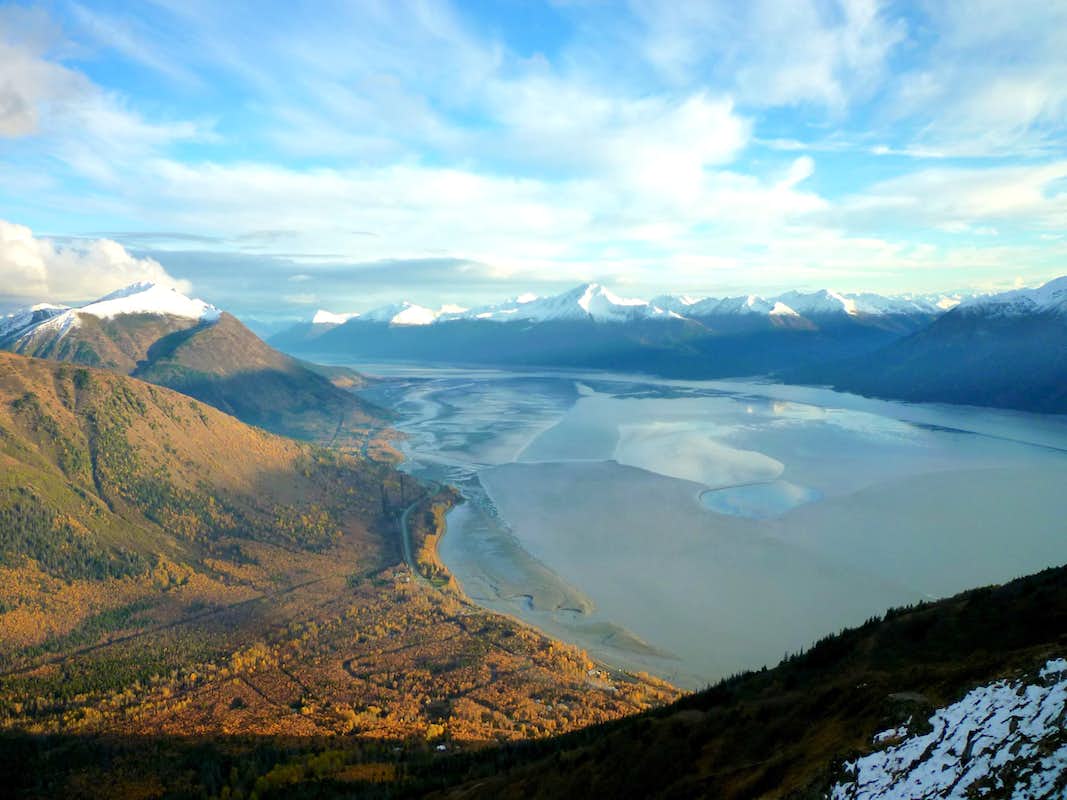 In this view from Indianhouse Mountain in the Chugach Range, Mt. Alpenglow (center) reigns over upper Turnagain Arm

I wouldn't classify this peak as being in the Alaska Coast Range Region, but rather in the Kenai Mountains.

I agree, and of course the text says Kenai Mountains. However, SP currently has no Kenai Mountains region, and "Alaska Coast Range Region" is the closest fit for the time being. As you probably know, it has been used for peaks all the way out to Kodiak. By way of precedent, the Chugach Range page by Natestation (on which you assisted, I believe) placed the Chugach in "Alaska Coast Range Region." I would like to put together a simple Kenai Mountains range page sometime, which could collect the scattered Kenai peaks on SP (such as Mt. Marathon and so-called "Encounter Peak"). Would you like to collaborate on it?

Yeah, I noticed that there were some outlying peaks assigned to the Coast Range, but I didn't know that there was a requirement for a peak to be assigned to a range. I'm happy to help collaborate, but I don't know much about creating summitpost pages. I've only climbed a few officially named peaks in the Kenai Mountains (Byron Peak, Bench Peak, Gilpatrick Mountain), but I'm happy to help out.

Great, let's give it a shot this fall. It's help with the info I need, not so much web page mechanics, which I can (sort of) do myself. Main thing I'd like to launch a decent range page is the right map--something with the proper level of detail to display nicely on a single computer screen and that's not copyrighted (or that one could get permission for). Sort of like what Gangolf has for an overview map here: http://www.summitpost.org/stubai-alps/155126 . So keep your eye out, and I'll do the same. Then maybe we could sit down over lunch sometime and sketch out rational boundaries for subregions that the map could be divided into.

So, I was wondering if we were gonna put up a "Kenai Mountains" page or not???