A LONG Day up the Boulder Cleaver 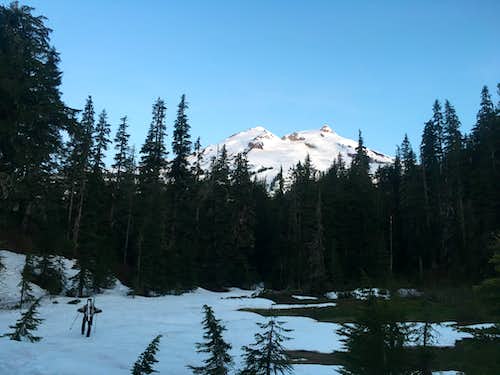 When the forecast for Mount Baker rolled around early in the week, we were psyched. For the first time, we were being presented with a weather window, however small, to climb our first “new to us” mountain since January. We were incredibly psyched. The only caveat was this: we would get to climb Mount Baker in a single push or we would not get to climb it at all.

Bright and early on Saturday, we discovered that the Boulder Ridge trail was very overgrown and we soon began encountering monstrous windfalls at increasingly frequent intervals- trees so big that we had to climb around them or belly flop our way over them. To make matters worse, before we reached the end of the ‘maintained’ trail, our path was intermittently interrupted with deep puddles that left Andy’s feet soaked and my feet very damp. 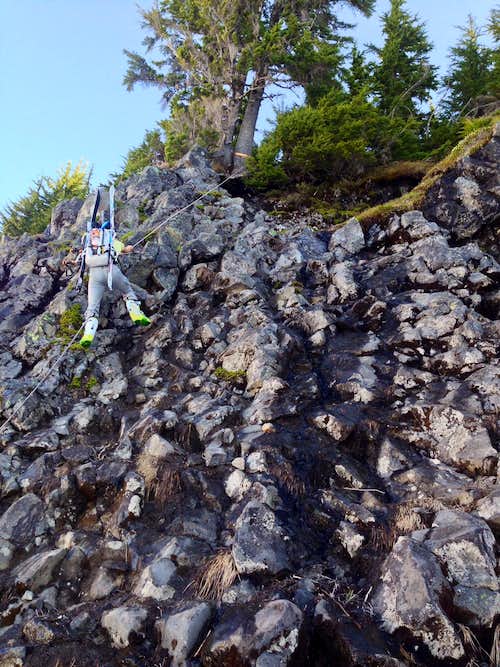 About 3 miles up the trail, we hit snow and were finally able to ditch our wet shoes and switch to skis and ski boots. A brief stretch of skinning set us up to scale the 3rd class bit (the fixed line is in good condition as of 5/7/16) which was actually OK in ski boots). 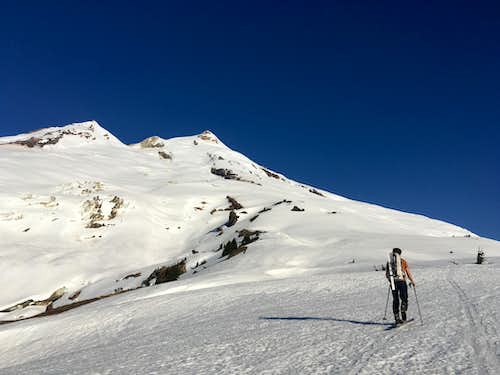 Halfway up the cleaver we saw a group of skiers heading down. After a quick conversation we learned that they had bailed after one member of their party had fallen into a crevasse. They had pulled him out without much trouble but had decided to call it a day.


We left our skis at the top of the cleaver since neither of us were psyched at having to ski down through a maze of snow bridges and crevasses. Andy set out to break trail for the first section. I was reminded that traveling as a rope team takes FOREVER. 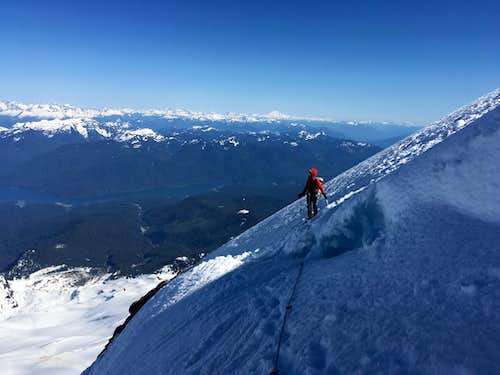 As the summit grew closer, we switched spots and I led us up to the top. We met a group of skiers at the summit and they did a little good-natured shit talking as they stepped into their bindings for the ski down.

The way down went without incident- quickly plunge-stepping our way through solid snow and carefully tip toeing (and in some cases, jumping) across snow bridges until we made it back to our skis. Our hope at having decent conditions faded quickly as our skis slid out onto packed snow and ice. I packed my skis down a couple hundred feet- post-holing and getting more frozen water inside my ski boots. Eventually, the snow softened and we got into some sweet, sweet turns.

We hustled down to the edge of the snow and quickly switched to hiking shoes as the light faded. We then ran into the reason we got back to the car in the dark- the GPS was dead and all of our tracks had either melted out or been washed away by snow melt. It was time to navigate the old fashioned way.

An hour and a half later, we navigated our way back to the Boulder Ridge trail and began the brutal process of climbing over the same giant trees in the dark. Exhausted, cursing, and covered in bruises from falling, we made it back to the car at 10:30pm- over 18 hours after leaving the trailhead- to find 2 beers waiting for us, courtesy of our skier pals :)

It was a horribly long day and I was pretty worked for a couple of days. However, Baker was such a beautiful mountain that I would be happy to go back for another push. This time, however, I’m bringing waterproof trail shoes and a change of socks.

For more information on this climb and additional photos (or for more info on other routes in the Cascades) check out our site at www.mountainrefugees.com