The easiest way to climb Mount Barnard is via George Creek. However, George Creek is only open from April 15th to May 15th and December 15th to January 1st since it lies in the Bighorn Sheep Zoological Area. I decided to approach via the North Fork of Lone Pine Creek. 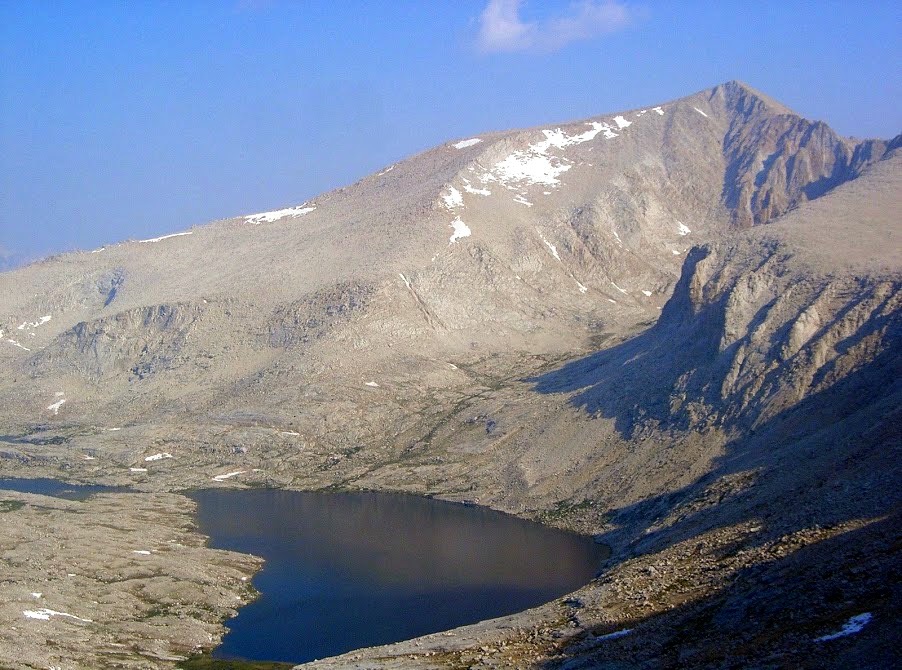 I camped at Whitney Portal Friday night. Saturday morning, I hiked up the Mount Whitney Trail to the North Fork of Lone Pine Creek, then followed the North Fork to Clyde Meadow. Some bushes have been cut at the last crossing of the North Fork of Lone Pine Creek, making the crossing much easier. From Clyde Meadow, I headed towards “Russell-Carillon Pass”. I feel heading directly from Clyde Meadow is a better route than the Rockwell Variation. The Rockwell Variation is less direct and involves more boulder hopping. From the pass, I dropped north down towards Tulainyo Lake and finally to Wallace Lake. From the hike over to Wallace Lake, I got a good look at the aesthetic “Mount Carl Heller”. 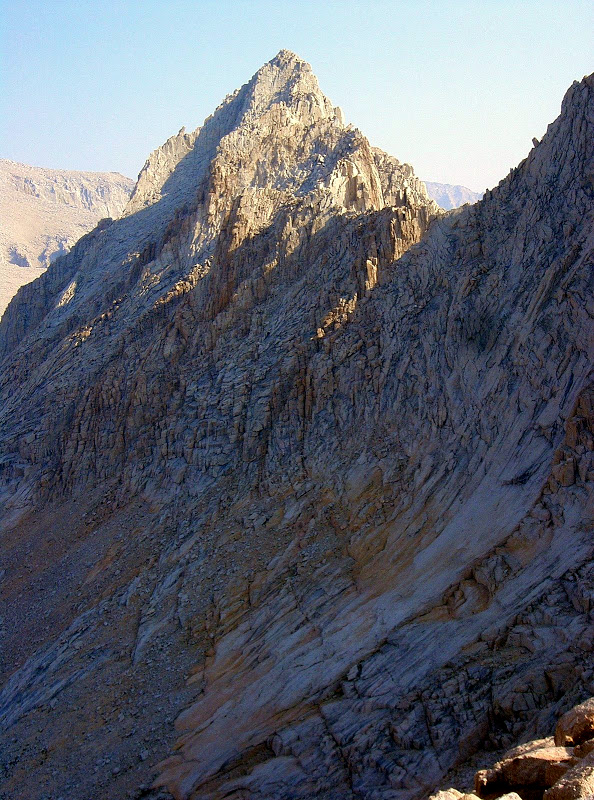 From Wallace Lake, I crossed the outlet and continued up Mount Barnard’s south ridge on primarily second class terrain. Staying on the ridge definitely required third class scrambling on some loose rock. At one point I nearly pulled a rock onto myself. I jumped out of the way to avoid the rock and managed to get a rock splinter in my thumb. I pulled the small, sharp piece of rock out with my teeth and spit it on the ground. I continued climbing the south ridge trying to ignore the pain. There was a thunderstorm about three miles west of where I was and was slowly moving towards me. To the south, there was a good view of Mount Russell, “Mount Randy Morgenson” and Mount Whitney. 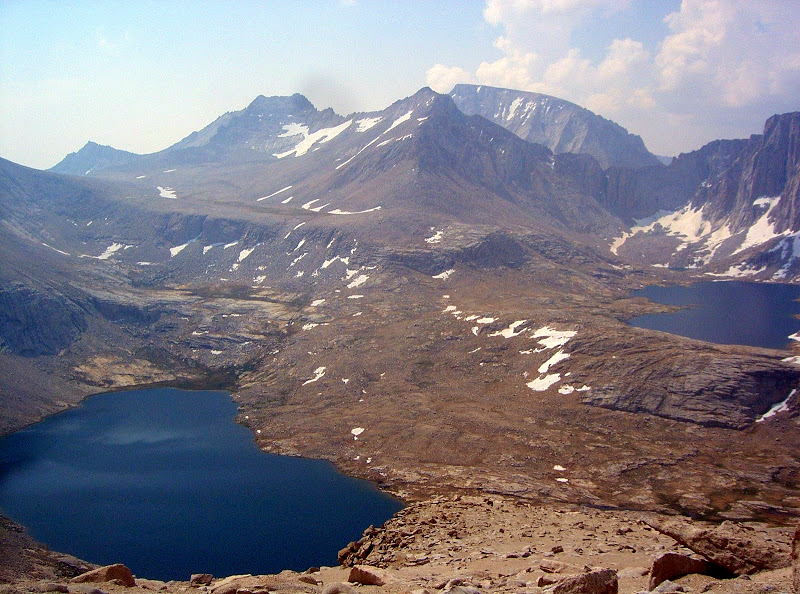 The south ridge met up with the southwest ridge at the summit plateau. I finally reached the top and found a new register placed in May 2008, replacing the original register that was stolen. I wanted to traverse over to Trojan Peak, but decided against it because of the approaching thunderstorm. 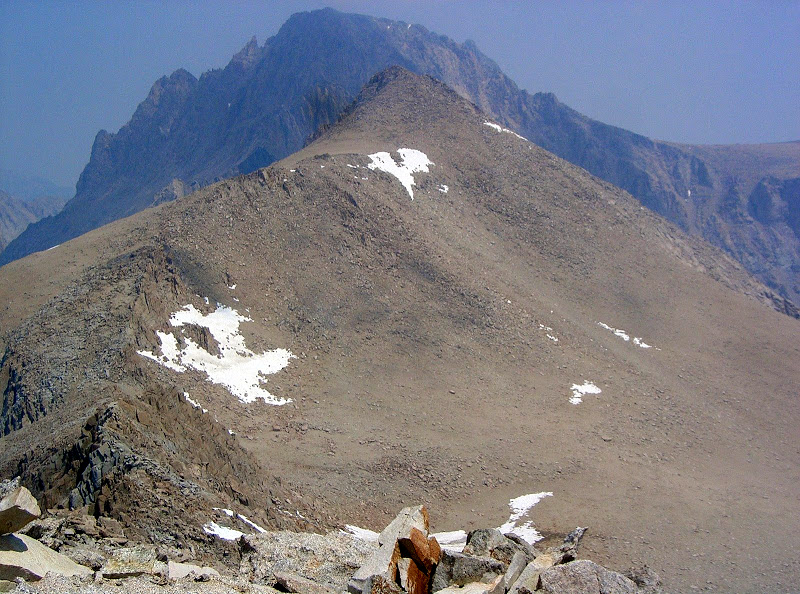 Trojan Peak & Mount Williamson, from front to back.

I returned via my ascent route and encountered light rain while descending the North Fork of Lone Pine Creek. By the time I reached the trailhead, the rain was more steady. I dropped my pack in my car and ordered a burger, fries and beer at the Whitney Portal Store. Before my burger was ready, the rain was coming down quite hard and was accompanied by thunder and lightning. A large mud/rock slide blocked Whitney Portal Road. A single lane was cleared later that night or early the next morning. 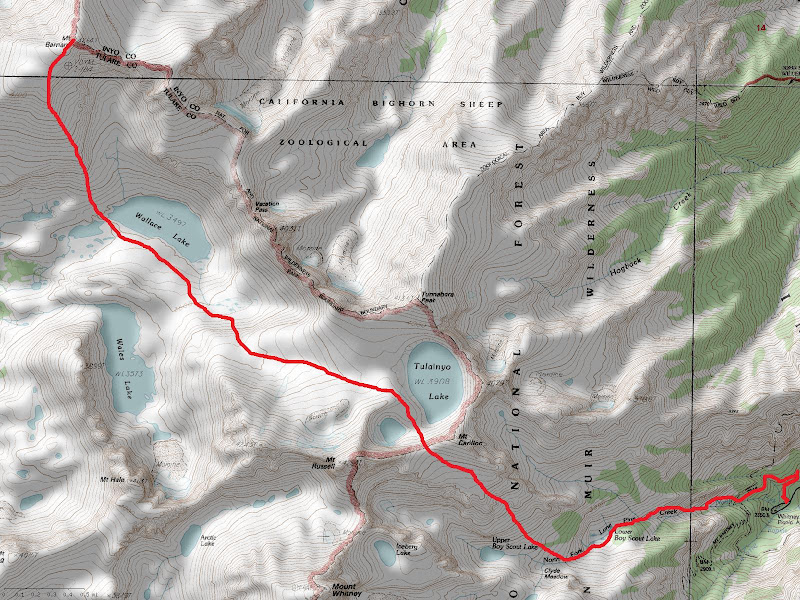 and great effort. Those are impressive stats.

Planning to climb Barnard, Trojan and fish for some goldens for a few days. Thanks for the beta.