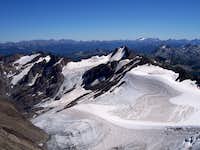 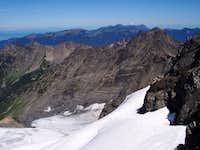 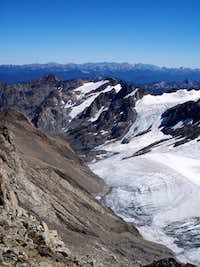 Mt. Carrie is the highest mountain in the Bailey Range of the Olympic Mountains. It is famous by sight if not by name. From the visitor's center on Hurricane Ridge, Mt. Carrie is the huge, glaciated peak that seems so close you can touch it.

Although just shy of 7,000 feet, Mt. Carrie intercepts the majority of storms rolling in off the Pacific, and the resulting high snowfall has led to the creation of two substantial glaciers on Mt. Carrie's flanks. The alpine flavor on Mt. Carrie is therefore much more reminiscent of a much higher peak.

The mountain also marks the first summit along one of the classic high alpine routes in North America, the Bailey Range Traverse. As such, Carrie is ascended quite frequently by those attempting the very committing Bailey Range Traverse. Carrie's mystique is further enhanced by its being guarded by the infamous Catwalk. In order to get to Carrie, one must cross this exposed ridge, and this experience makes an otherwise easy ascent a tad thrilling.

For a moderate climb (Class 3 on the Catwalk, Class 2 elsewhere) with spectacular views of Mt. Olympus and the rest of the Bailey Range, Mt. Carrie is a great scrambling objective. 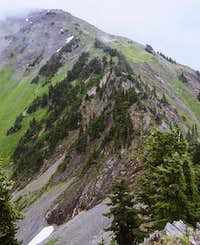 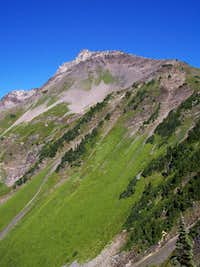 Carrie from near Catwalk-Photo courtesy YEM 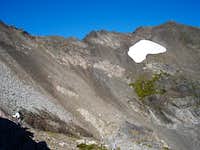 On the Olympic Peninsula, drive US 101 west from Lake Crescent 2 miles to the Solueduck River Road. Turn left 14.2 miles to the road-end and trailhead, elevation 2000 feet. Hike the trail 1 mile past the Deer Lake Trail, and continue another 6 miles up to Heart Lake at 4,800 feet. Many camps available here.

From Heart Lake, hike 1.5 miles to gain the 5,100-foot crest of the High Divide, with great views of Mt. Olympus spreading out before you. Head left (south) along the High Divide 3 miles to where the official trail dead ends. Head straight up a worn track to the top of the ridge on Cat Peak, and at the top, see your first views of the "Cat Walk," the exposed ridge-top that connects the High Divide with the Bailey Range (class 3, exposed).

Cross the Cat Walk using great care; a fall here can be fatal. Once across the Cat Walk, pass a campsite with a dirty sinkhole pond known as "Boston Charlie's Camp" named for an old explorer in the Olympic Mountains. This is the official beginning of the Bailey Range Traverse. Parties in distress (usually bad weather coming in) use Boston Charlie's as a bivy site, but the terrain is not level, and it won't be a comfortable night.

Climb the trail up from Boston Charlie's camp, and gain the southwest ridge of Mt. Carrie (class 1). The ridge starts as mainly a grassy climb. Later, as the ridge narrows higher up, it becomes a mixture of grass and rock outcroppings, until at the top of the ridge, you come to a rocky, scree basin ringed with summits. The true summit is at the far right of the basin. Traverse scree and snow (ice ax advisable) to reach the true summit (class 2).

The guide book says that the climb from a camp at Heart Lake is 5 hours. My partner and I looked at the map and said "No way. It's only about 3 miles." Well, 9.5 hours later, we were dragging back into camp at Heart Lake. It's a long day.

There is a $25 fee to enter Olympic National Park. You must also obtain a backcountry permit to camp in the park ($5.00).

For camping and trailhead information, check out the park website at:

The mountain is generally climbed during the regular climbing season, from May through October. It is a very long approach to the mountain (13 miles one way), and would be exceptionally difficult in winter. The weather in this area, due to its proximity to the Pacific, is notoriously bad, and ferocious storms would be the norm in the winter months.

Camping is permitted at several comfortable sites along the Soleduck River, but a permit is required from the park for a modest fee.

There are at least five superb campsites at Heart Lake. It is also possible to camp on the High Divide, taking water from snowbanks, and sinkholes later in the season. Two miles from Heart Lake, there is another lake called "Swimming Bear Lake," so named because it is featured in a Walt Disney documentary from the 1930's with a bear swimming in it. Good campsites at that lake are also abundant.

Camping at Boston Charlie's should only be attempted as a last resort, as it is exposed to the elements, cramped (with barely enough room for 1 tent), and the water in the pond definitely needs filtering. As previously mentioned, there is not enough level ground for even one tent. This is camping in an emergency only. Don't count on this being your first night's stop.

The vehicle entry fee is now $25 (good for one week) and the back country camping fee is $5 per person per night.

What a rip! It makes sense to get the Interagency Pass for $80.00. Thanks for the update.