Mount Devine lies in the Tohono O'odham Nation about 60 miles west of Tucson in a very remote part of the state. However, the peak has 1983 feet of prominence coming in at number 75 on the Arizona prominence list and it is also the range highpoint of the North Comobabi Mountains. Based on the altitude of 4783 feet in Southern Arizona one would expect a typical desert hike, however we found very dense brushy and thorny vegetation more reminiscent of a peak in the 6-7000 feet range, such as catclaw or various types of yucca and algarve plants. With other words, this hike is extremely brushy in parts and this should be taken into account! However, the area itself is very pretty and worth a visit. Please note that this hike is entirely on the Indian Reservation and you are not supposed to be there. The area is very remote and we didn't have any cell phone reception (neither AT&T nor Verizon) until we were back on highway 86 (see Getting There). A look at the map actually shows a dirt road leading from Indian Road 34 towards the mountain, however we found this road in very poor condition. The map also shows a 4WD track going to a mining prospect high up on Mount Devine and we assumed we could use this old mining road as a trail, but found the road to be essentially non existent. This made for a much longer and more difficult hike than we expected. The reward is fantastic and unobstructed views from the summit to many highly prominent AZ peaks such as nearby Kitt, Coyote, Gu-Achi and Baboquivari Peaks as well as peaks in the Tucson area and all the way into Mexico. 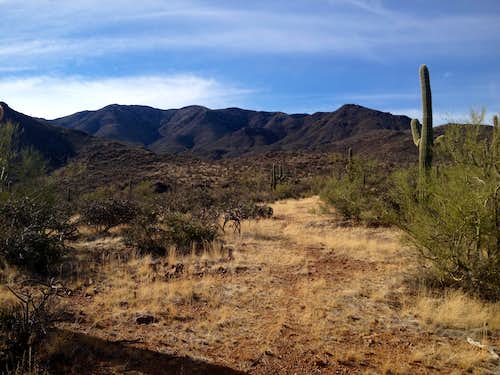 In Tucson take I-19 south and then take the first exit (exit 99; Ajo Way/Rt. 86) and go west on Rt. 86. Continue Rt. 86 for 40 miles entering the Tohono O'odham Nation along the way and turn right onto Indian Road 35. After about 9 miles make a left turn onto Indian Road 34. Both Indian roads are paved. After 5.8 miles you will have to turn left onto a dirt road which is shown on maps but you will not see it from the main road. You will need GPS and map to find it. The road was in very poor condition and we only drove in for about a 100 yards. 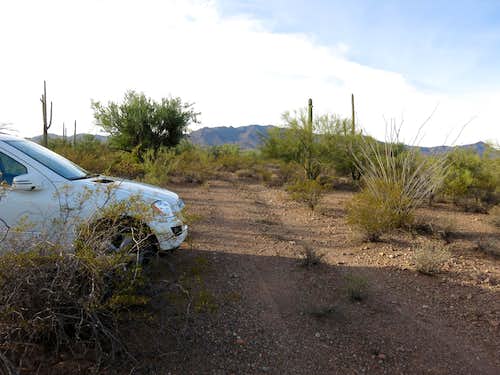 From the parking spot we continued to walk on the dirt road for about 1.5 miles expecting to find an intersection with the mining road shown on maps. However, we actually never found this intersection but realized that the dirt road was bending away from where we needed to go. Since the aforementioned mining road essentially just exists on the maps, I would recommend to just leave the dirt road whenever convenient und just aim for the north ridge in the center of the peak. 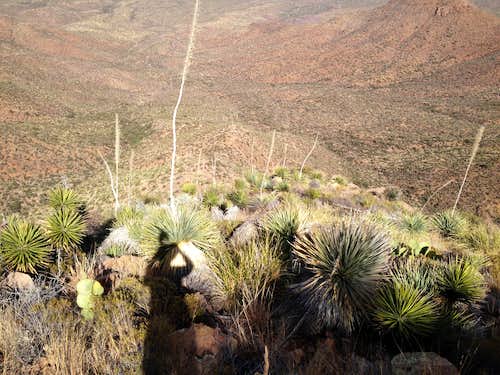 View down the north ridge

There are actually some horse trails that lead towards the base of the peak that can be picked up easily. Otherwise, cross-country travel would not be difficult either at this point as you can see the north ridge and the vegetation is not prohibitively dense here. Getting closer to the ridge you will come across a major drainage and on our way out we actually followed the wash for some time which allowed for fairly easy travel; we did not encounter any dry falls that would be too difficult to scramble up or down. Eventually you will need to be on the left side of this drainage in order to gain the ridge. On our ascent we actually were on the other side of the wash initially still hoping to find or being able to follow the old mining road, however progress there was extremely slow due to very heavy brush mostly cat claw. I would recommend to avoid that area!  Once the north ridge is attained, just try to stay right on top of the ridge as this provides the easiest travel. The ridge is steep, loose and extremely brushy and requires the occasional use of hands but nothing beyond a class 2+. When we tried to get around one of the bumps on the ridge we found that the slopes were looser and brushier. Once you get to the main summit ridge turn right and follow that ridge all the way too the highpoint, again generally staying on top of the ridge to avoid more brush and looser slopes. 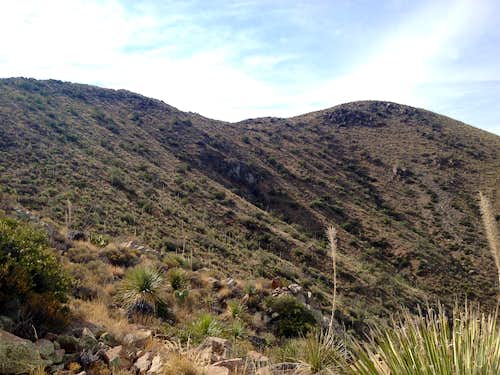 View along the summit ridge towards the highpoint

You can see the route for the entire hike making navigation fairly straightforward. The round trip hike as described above is 12 miles but the going can be slow sometimes so plan accordingly.

The hike is within the Tohono O'odham Nation so technically you are not supposed to be there and they do not have a permit system either. Hike at your own discretion!

The best time to climb this peak would be in winter or late fall and early spring. It gets way too hot in these parts in summer. On our hike in late November we found very pleasant conditions with temperatures in the 70s in the afternoon but cool in the morning.

You are inside the Tohono O'odham Indian Reservation and camping is not allowed anywhere. However, the trailhead is only 60 miles away from downtown Tucson which offers countless lodging options for any budget as well as camping options. 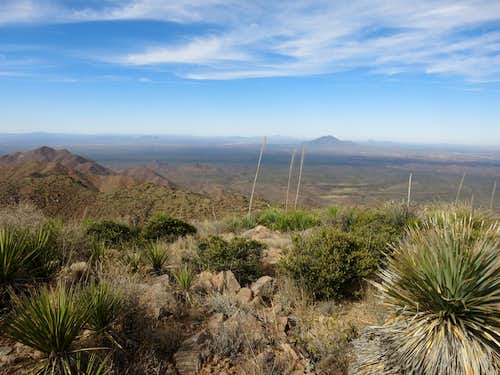 Gu Achi to the north - Photo courtesy of Scott Peavy 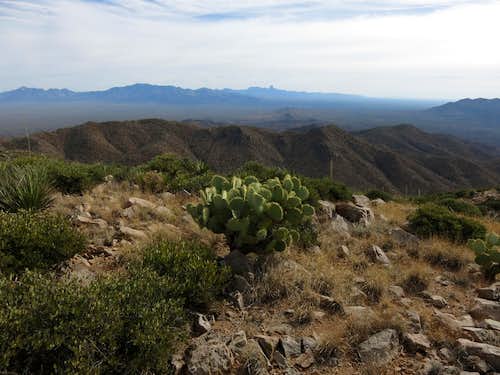 View towards Coyote, Kitt and Baboquivari to the southeast - Photo courtesy of Scott Peavy