Mount Emma is a uniquely shaped "Bi-Centennial Peak", or one of Colorado's highest 200, located between the old mining towns of Telluride and Ouray near the more famous 14er, Mount Sneffels. Tucked away from view by the rugged surroundings and taller peaks on its north and west sides, Mount Emma is reserved for people who venture high into the Sneffels Range, or are skiing the slopes of Telluride Ski Resort to the south. The peak is visible when heading into Telluride along CO 145, but the neck bending view is difficult to enjoy when driving, and most people are too focused on the road in front of them to make out Mount Emma above.

Mount Emma is Colorado's 196th highest peak, and boasts 561' of prominence from neighboring Gilpin Peak. She resides in San Miguel County in the Telluride Quadrangle.

When viewed from neighboring Gilpin Peak, the north side of the mountain looks like a stacked wedding cake, with bands of cliffs alternating with steep talus slopes. Add some snow for the "frosting" and the resemblance is quite obvious.

The rock leading to this peak is loose, but the summit blocks offer an interesting scramble on solid volcanic lava flows reminiscent of nearby Teakettle Mountain. Between its "off the beaten path" location, loose rock, and proximity to taller summits - Mount Emma is a lonely peak that sees far fewer feet than other peaks in the area. Her charms are reserved for those who make the effort to visit her, and don't mind a little loose rock to do so. 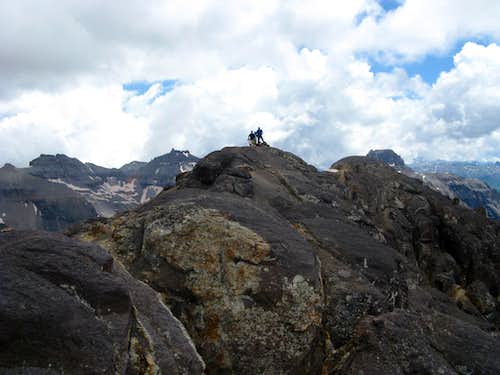 Who is Emma? Why is this mountain named after her? It has been suggested that the peak was named for an early explorer or climber's wife or perhaps daughter. The most reasonable may be that the mountain is named for Ferdinand Hayden's wife, he married Emma C. Woodruff in 1871 and his survey team famously surveyed the Ouray area in 1874 (Thanks to Don Paulson, curator of the Ouray County Museum for this lead!). 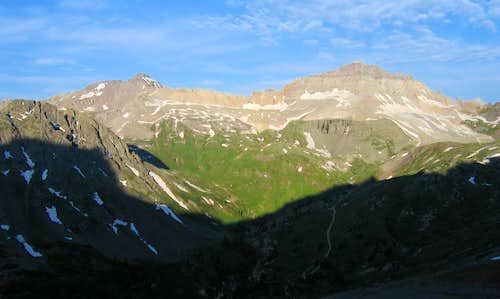 Emma and Gilpin from Teakettle - by RyanS

The most practical way to access Mount Emma, is from Yankee Boy Basin on the north, outside of the mountain hamlet of Ouray. To access Yankee Boy Basin, head south out of town and just after the first switchback as US 550 begins its ascent, turn right onto County Road 361. The initial road is well graded dirt, and passable for any vehicle. It slowly gets rougher, but most passenger vehicles should be able to make it at least the first 6 miles to the Imogene Pass turn off, and even another 3/4 miles to the Governor Basin turnoff is reasonable for most vehicles. This is where most passenger vehicles will stop. 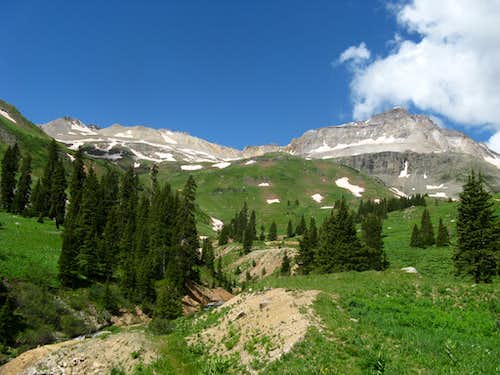 With clearance (even if no 4WD) people should be able to continue another mile to 11,350' and a small restroom. Beyond this point the road gets much rockier and 4WD is recommended. It is not necessary to drive beyond the bathroom at 11,350' as you would leave the road in about a half mile anyway.

The peak can also be accessed from Telluride via the Jud Weibe and Sneffels Highline trails into Pack Basin.

There is a lot of private land and old mining claims around Yankee Boy Basin, as such camping is the area is limited.

There has also been an ongoing controversy surrounding a potential fee program for Yankee Boy Basin. This fee proposal has been heavily contested by users of the area, and for now, this area remains "free". 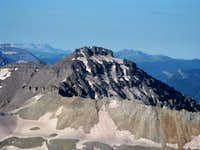 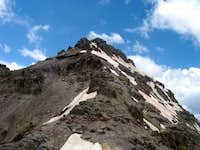 Camping in Yankee Boy Basin is limited to specific fee areas due to the large amount of private land and mining claims in the area.

Angel Creek and Thistledown were the only two open "campgrounds" as of July 4, 2009. There is a self permit fee station at each. Angel Creek access is on a rough road and may require 4WD. Both can fill up quickly and leave visitors "out of luck". There used to be a third area higher up the road, but it was noted as closed last time I was up in this basin.

If you choose to camp anywhere else along the road do so at your own risk, the official position is "no camping" except at Angel Creek and Thistledown.

Another option would be the Amphitheater Campground in Ouray or the KOA Campground north of Ouray. Ouray also has lodges and bed and breakfasts that you can stay at.

I am not sure of any camping options nearby on the Telluride side, but the town has many lodging options year round. The closest option I can think of is the Sunshine Campground near Lizard Head Pass.

Probably the easiest and most practical route is the Northeast Ridge from Yankee Boy Basin. This route is described from 11,350', otherwise referred to as the "Bathroom Trailhead" for Mount Sneffels.

The approach involves hiking up the basin that is embraced by Stony, Emma and Gilpin to the Stony-Emma Saddle. Climb a steep talus and scree slope to reach the northeast ridge of Mount Emma. The initial slopes here are not too steep, but they are quite loose, those unfamiliar with loose San Juan scree will probably not enjoy this part very much at all. There is some loose but easy 3rd class scrambling to gain the ridge crest right at the top, a helmet is recommended.

Continue to follow the ridge as you dodge towers and cliff bands via loose gullies to reach the funky lava formation at the summit area. The final moves to gain the flat summit ridge can be tricky, you either have to do a third class "leap of faith" type move on blocks on your left, or climb one of two cracks (class 4), either middle or right side. There may be other options around the left side, but there was some icy snow there and we didn't explore it. 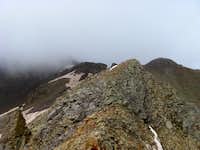 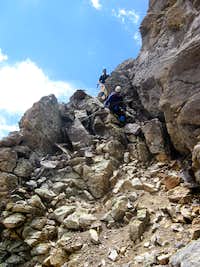 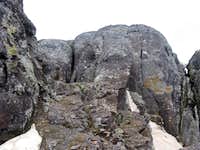 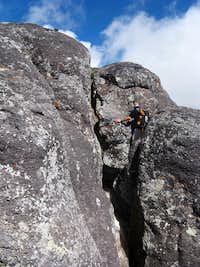 There are route possibilities from the Telluride side, but word is that it involves loose steep class 3 and 4 gullies and may not be as practical as coming in from Yankee Boy. If you live on that side and are willing to fight the loose rock, it may be worth it to save on driving over Imogene Pass. Access via the the Jud Weibe and Sneffels Highline trails into Pack Basin. (Note: this information comes from Telluride Trails By Don Scarmuzzi) 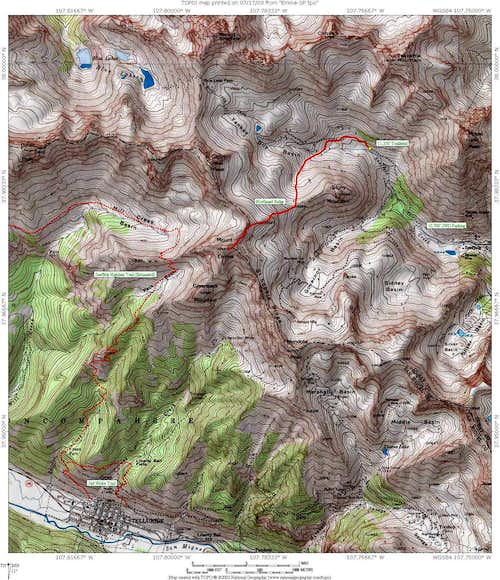 No special equipment should be needed in dry conditions, however, be prepared for loose rock and a short difficult class 3 or 4 summit move to attain the highest point.

Snow in the high gullies below the summit blocks may necessitate an ice axe and crampons in early season.

This area is included in National Geographic's Trails Illustrated map #141.

The road into Yankee Boy Basin is often plowed in winter to the Camp Bird Mine, beware of avalanches as the upper basin is surrounded by extremely steep slopes and sees a lot of snow.