I want to first thank you for stopping in to read this trip report of mine. It's not a Pulitzer Prize winner, but hopefully you get some enjoyment from it nonetheless. The read should take about five minutes.

Next, a quick note on photos: This is more for newer members than those who already know the deal--to view these photos at their best, click the photo that you're wanting to look at more closely, then on that new page click "View high-resolution image" to the top-right of the photo on that page.

And as they say, "Without further ado..."

Below: Mount Gilbert is the rounded-looking peak just to the left of center, as seen from Elko, NV. Ruby Dome, the tallest peak of the Ruby Mountains, is on the right.

By the summer of 2020, the gargantuan Mount Gilbert had been staring back at me for too long. In the above photo, it is the peak that is just to the left of center. You might say that everyone serious about the Ruby Mountains and the treasures therein knows of "Tha Gilb" and its magestic, formidable appearance when either up close or far away. It stands as one of the Ruby Mountain's giants despite the fact that it is only 11200' or so. Finally, after two years from first becoming familiar with it, the opportunity presented itself to make an attempt at reaching its top. Basically, I put in my bid to have the privilege to stand on Gilb's head. I was offering Saturday, June 20 of 2020. Gilb didn't reply, as you might imagine. But still, I could sense the possibility of being rewarded the opportunity. Below are some of the notes and photos of the experience.

My hopes were temporarily threatened as I turned toward the Lamoilles Canyon Scenic Byway while enumerable runners were running down the road in my direction. But a lady who was parked in the grass allayed my fears. "You can still go. Just drive slowly by them," she said. I thanked her and continued, beginning an awkward 20-miles-per-hour drive that involved weaving past runners on the right side, the left side, and even a couple in the middle of the road.

Hiking from the parking lot at 7500', the ascent was going to be approximately 2700 vertical feet, a good workout to be sure. The hope was to be up near the top by noon, which is 1000 feet per hour, a rate I'd done many times before.

"09:30- At saddle at base of ascent below Gilb. Looking for stream crossing."

Upon ascending Lamoilles Canyon's right or south fork on its main trail, one must first cross a vigorously flowing stream. Near the beginning of this trail is a small wooden bridge that facilitates hikers going from the parking area side to the trail side. Below is a picture during this part of the ascent between the trailhead and where one must find a stream crossing in order to begin ascending Mount Gilbert in earnest. (The pointy formation just left of center in the below photo is part of Mount Gilbert.) 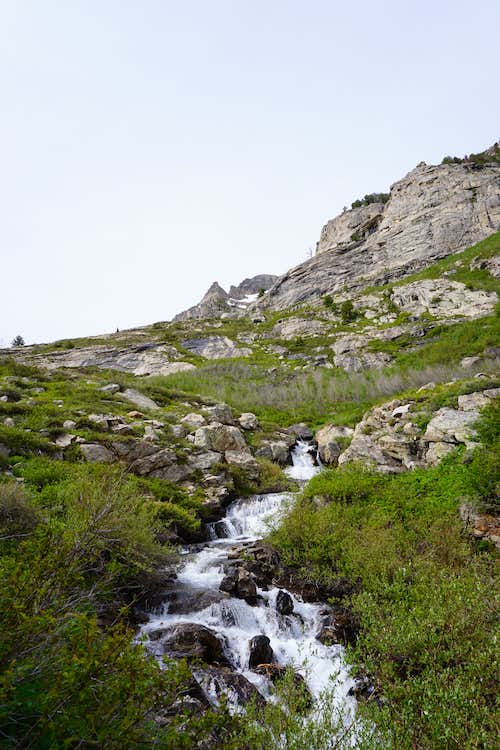 "10:30- 9500', scrambling boulders on south side to avoid lots of foliage and bushwacking (whacking?)" - Yes it is properly spelled "Bushwhacking."

Here was an opportunity to get some good looks at both ends of the section of canyon that stretched out below. This picture shows the north end of Lamoilles Canyon's right fork. The "main" canyon's north wall is visible as well. It continues to the right in the shape of a giant J, kind of. 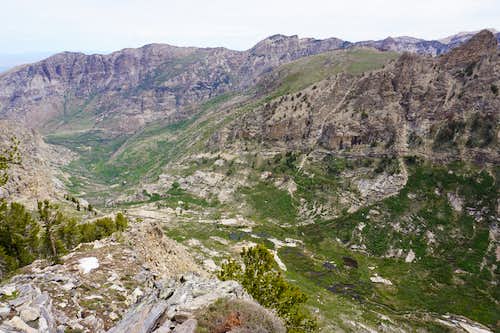 And looking south toward the other end of the fork. Snow Lake Peak and Mount Fitzgerald, from left to right respectively, are visible. 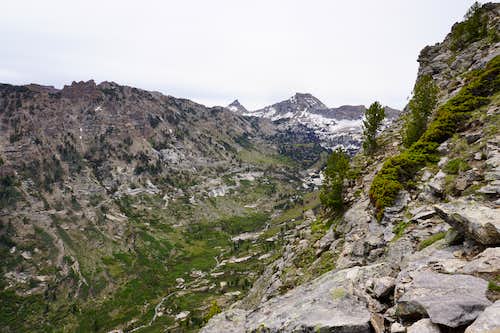 "11:15- Break at 10400' - Not exactly sure how to proceed. Traversing boulderfields, heading north. Then probably crampons up snow to the final stretch of dry ground." 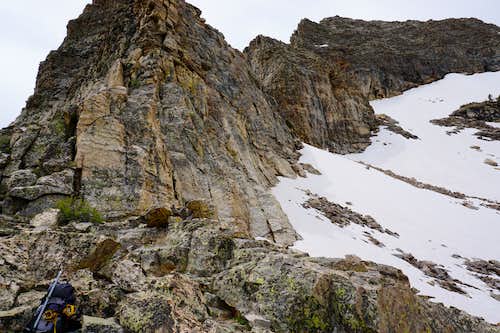 It was here that I realized the need to traverse the snowy slopes in front of me. I looked all around for route alternatives, but nothing seemed reasonable. Then I looked up, and there was the first "sun dog" I'd ever seen. It was high noon. The mountain wanted a showdown, aye? I whipped out the crampons like the cowboys with their guns back in the days of the Wild-Wild West. 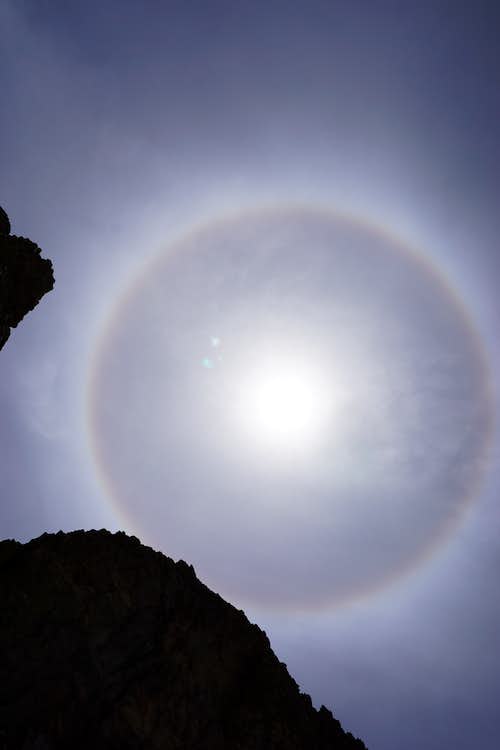 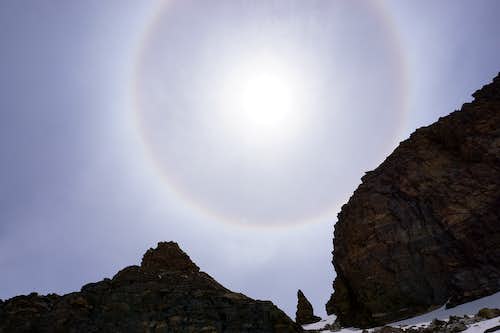 12:05- On rock in middle of snowfield. Very steep and snow is soggy. Feels risky. 30 more feet of snow to cross, and I hope to be on dry ground the rest of way." 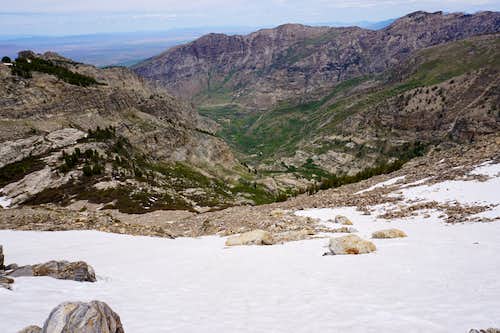 Below is a look at the snowfield/snow slope from the north. 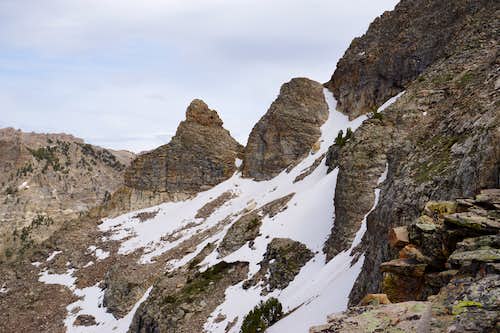 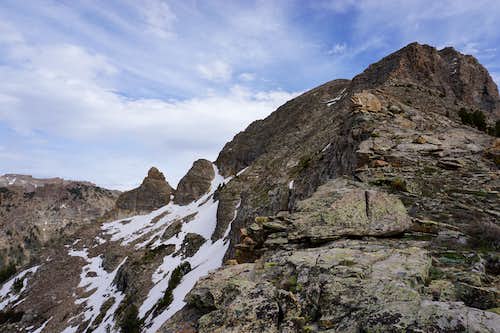 Admittedly, the steepness of terrain bothered me less than the thought of what would happen if I went tumbling. Got to hope mom never reads this, but I'd probably be dead right now if I had gone tumbling. In the mountains that's the way it gets sometimes when we're going to visit the highest places around.

As the last entry indicated, to enhance the fear factor was the soft snow. I kept the ice axe put away while I stabbed into the snow as deeply as possible with each movement. This was a calculation, a sort of guesstimate, but I'd guessed that an ice axe as a fall-arrest tool in that soft snow would be relatively useless. And the trekking poles felt like they were sufficient anchors. Fortunately, as another level of paranoia had me concerned of avalanche, I soon enough reached the rocks. With exposure still very much there, the hard ground brought on sighs of relief nonetheless. From there it was truly basic, enjoyable scrambling with perhaps climbing in earnest only a couple times.

"13:20- At the summit. Cool, light breeze if anything. Slightly overcast and hazy. One hell of an ascent."

I'd taken four hours instead of three, but that wasn't bad given the pauses and difficulties on the snowfield section.

I put my pack down at the peak's cairn and I snapped some pictures in every direction. Familiar peaks were like friends waving at me as I stood somewhere new, in awe again. 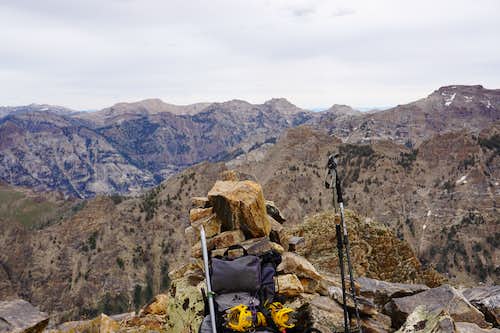 Besides the epic sun dog, the next most unexpected thing I saw was a colony of lady bugs. I encountered perhaps a couple hundred in the area adjacent to the summit cairn. 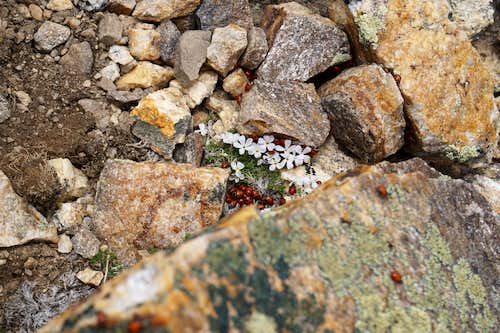 This note has to do with a friend telling me to take a picture of Echo Lake from the top of Mount Gilbert. Both of us erroneously thought Mount Gilbert overlooked Echo Lake. In actuality, the lake is just beyond those closest mountainsides in the picture below. Echo Canyon is also there, heading west until becoming mostly ranch land. 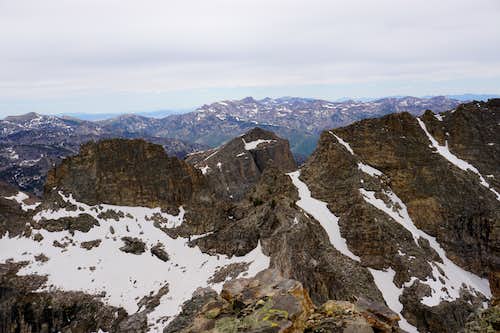 Looking north toward Spring Creek and Elko shows the ridge that I took to get down instead of retracing tracks over the snowfields. On the left of this ridge is the entrance to Seitz Canyon, and Seitz Lake, a harder-to-reach destination due to privately owned ranch land near the mouth of the canyon. On the right is the entrance to Lamoilles Canyon's south fork, which I entered for the day's ascent. 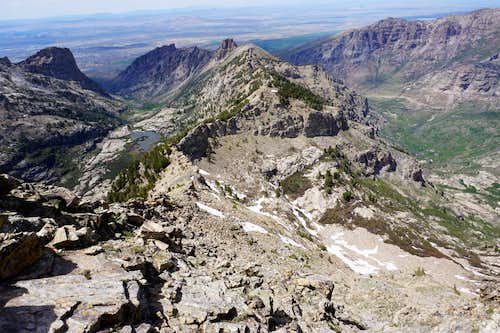 Looking west at at the south side of Seitz Canyon. Numerous waterfalls supply Seitz Lake. 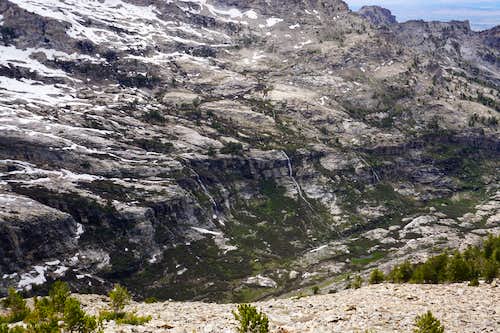 Below, looking slightly southeast is another view of the backside of the south fork of Lamoilles Canyon. Snow Lake Peak and Mount Fitzgerald are there toward the middle of the picture. Hard to see is the popular Goat Lake, toward the back of the canyon near the snow line. 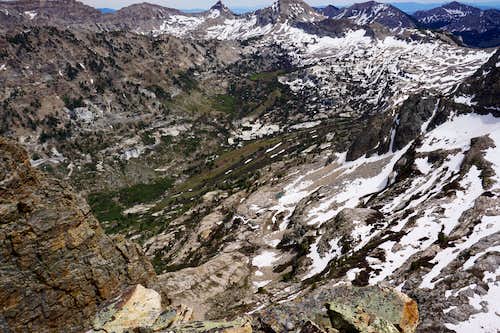 "16:12- To avoid the God-forsaken snow slope that I sensed death's closeness on, I traversed the ridge that goes to the northwest between Seitz Canyon and Lamoilles South. It took a while to find a drop point--for a bit, as my water supply disappeared I considered  a descent into Seitz Canyon. That side of the ridge seemed the most tame. But I had more familiarity with where I'd come from. So far I have still had to navigate some hazardous areas to get down from the ridge. And had I walked the the ridge another 30 yards or so, the sketchy moves I just made would've been unnecessary.

I still had yet to purchase a third filtration system after the last two froze while camping. In this situation, the typically undesirable potable water tablets were quite in demand. 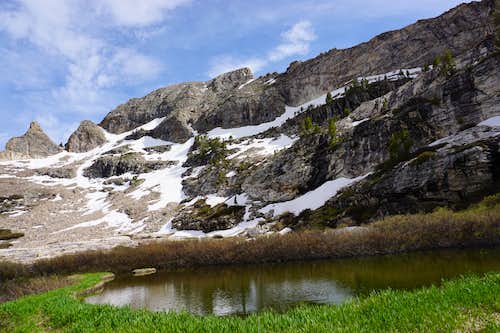 You may notice the levels of wall-like rock faces in the pond picture above. The terrain from the canyon floor to the ridgeline below Mount Gilbert is largely made up of such formations.

It's always a pleasure to hear the American Pika in the high lands, and it's an even greater pleasure to both hear and see one. Their warning calls have startled me and, presumably, at least thousands of other hikers during serenely quiet and still alpine treks. 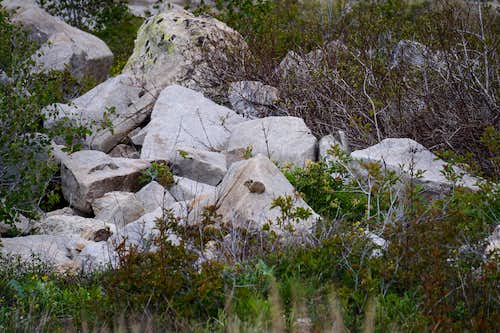 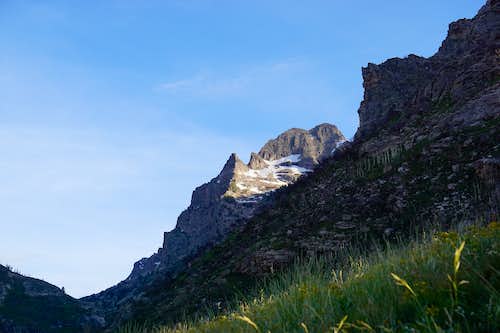 The sun was near setting. The mountains were quieting. The animals were preparing for their slumbering, minus the lions and other nocturnal beings of these rugged Nevadan hinterlands. Until next time, I said to myself as I stole a final glance of Mount Gilbert, which stood tall, gleaming in the final rays of the day's sunlight, seemingly wishing me a good evening. Indeed, Gilb. You as well. Until next time.

Thank you for reading! I promise that there's more of where that came from, and I hope that each new report only gets better and better. You are also welcome to follow me on Instagram at @nicksolovieff