Mount Hood South Side in October

This is as much of a photo album as a trip report of my first time climbing Mount Hood. I made a conference trip into an excuse for a nice climb up the south side (Hogsback) route early in the season. A lucky snow fall a week before my trip made for great conditions up the route. The bergschrund looked much, much bigger and intimidating than in pictures from recent years, so I opted to go west around it, then up to the summit ridge.  Man oh man was my first peek over the summit ridge and onto the north side of the mountain a rush. A stiff and gusting breeze made it that much more tricky (Ever notice how you can get hit by a strong gust in the mountains and not even hear it coming?). The view onto the north side of the mountain left me wanting to climb harder routes with more exposure.

I climbed alone (as usual) but I took extra measures to be safe.  I'm reaching the point where I need to find partners, but I can't resist the chance to climb. 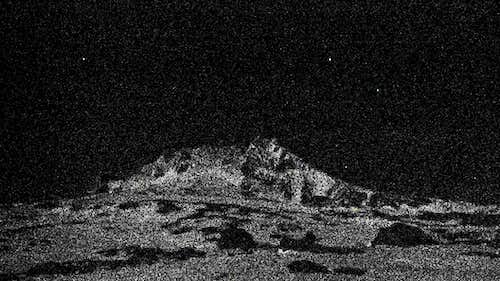 Here's a very grainy view up the mountain at about 1am or so.  The moon was so bright I was able to switch off my headlamp for much of the lower route.  It was incredibly peaceful and beautiful, especially when I stopped to admire the stars.  How fortunate are we to be able to see views like this? 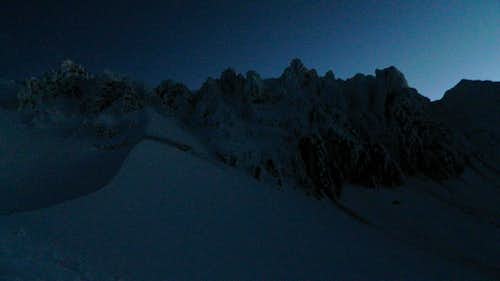 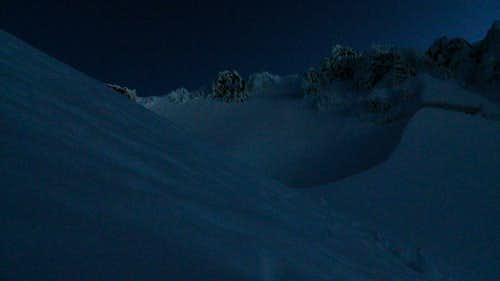 I opted to go to the left (West) of the bergschrund and take my chances on route finding that way.  Sorry the picture is dark, but it's a realistic impression of what I was considering as I made decisions.  Had I waited til it was brighter, I might have opted to around the bergschrund on the right, then up through the Pearly Gates.  But again, being alone and new to Mount Hood, I opted for what seemed to be the more conservative approach. 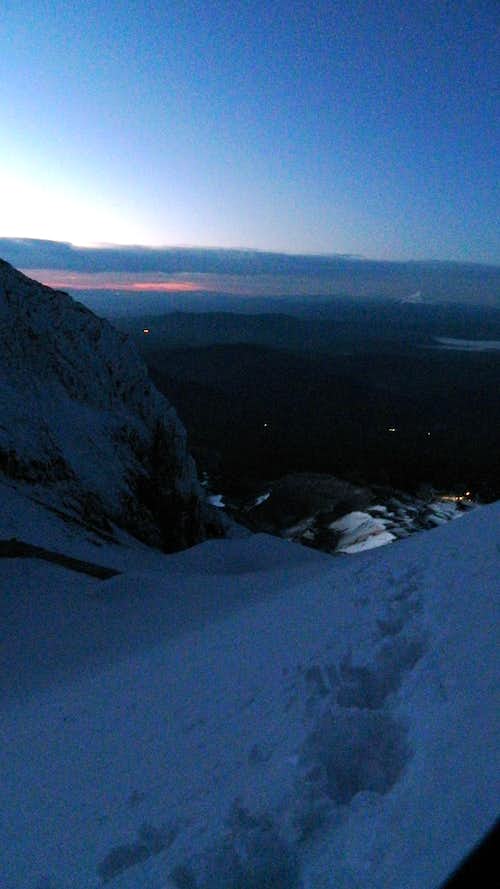 A nice view looking to the southeast.  I saw two headlamps several hours behind me, but otherwise nothing.  Solo climbing (for all its inherent stupidity) is pretty sweet. The snow was fairly soft here, but turned into squeaky styro as I climbed higher. 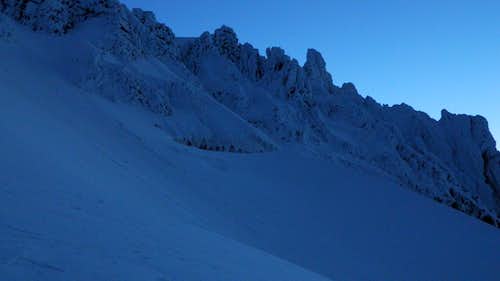 Another view of the 'schrund.  It looks bigger than in pictures from prior years. 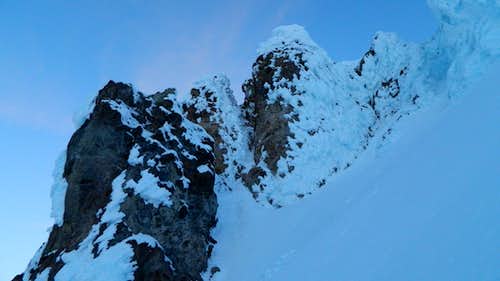 Getting steeper.  This pic gives a sense of the angles to the left (west) of the bergschrund.  I slowed down quite a bit and was very deliberate in my climbing at this point. The snow was highly consolidated and my crampons weren't getting good purchase; same with my axe.   I read that an experienced climber fell and died right here; be careful, friends! 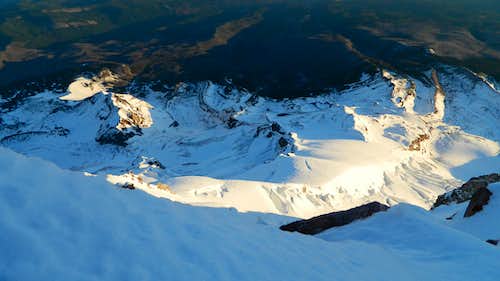 First peek over the ridgeline.  That is a loooong way down!  Gusty, unpredictable winds made standing up pretty scary! 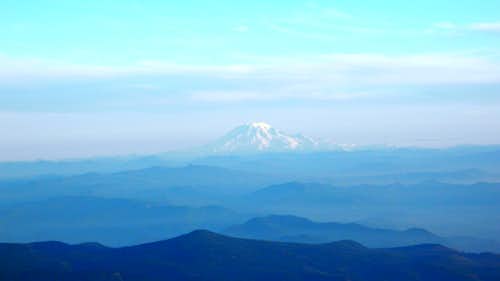 Mount Rainier from a long, long way away.  I can't wait to climb Rainier.  (Pictures below are all from the descent) 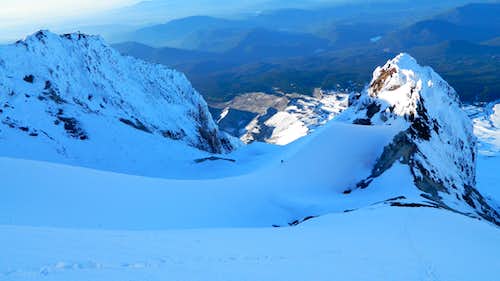 Two climbers apparently debating on the Hogsback as I descended.  They opted to turn around and go down before going any higher. 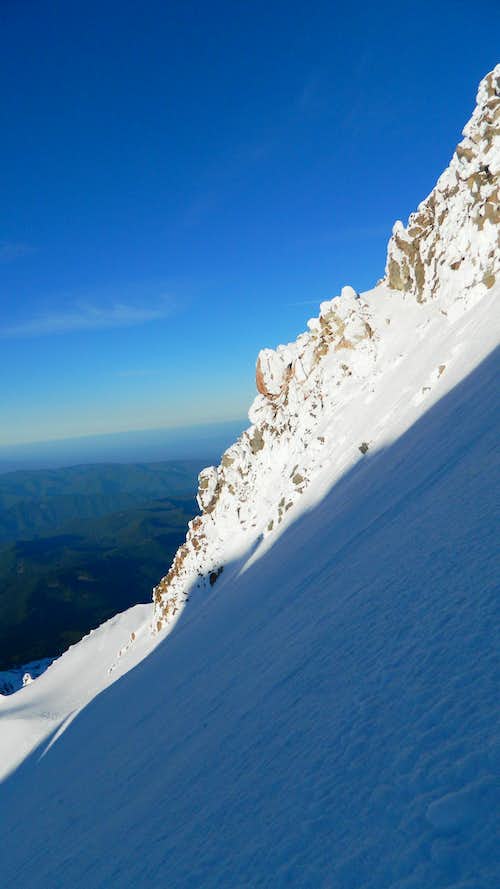 Fairly exposed up around 10,900 or so above Crater Rock.  The névé snow was very solid here and I worried a little about self arrest prospects if I slipped.  I debated bringing an ice tool in addition to my axe, but ended up not.  Looking back, I probably should have brought it since I was alone and ended up doing a fair amount of front pointing up high. 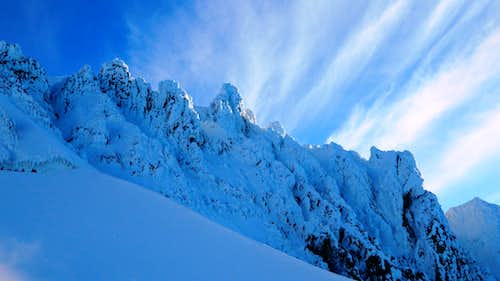 What a beautiful day!  A few clouds whipping over the summit made for a great view. 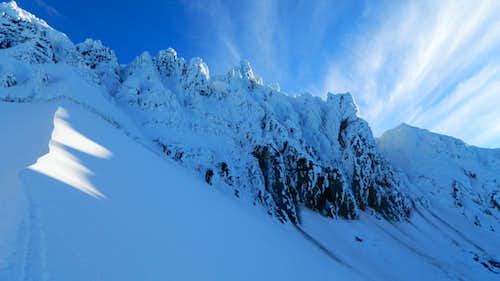 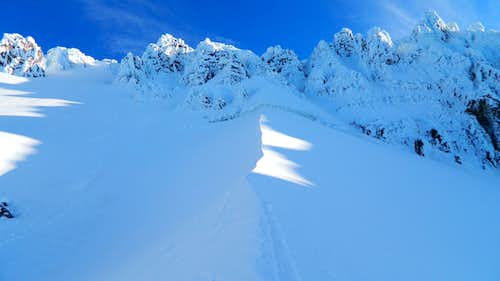 Another view of the 'schrund and Hogsback on the descent. 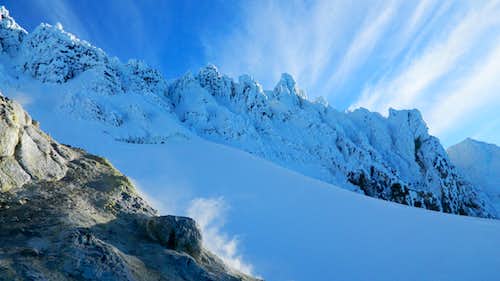 Sulfur vents and the summit 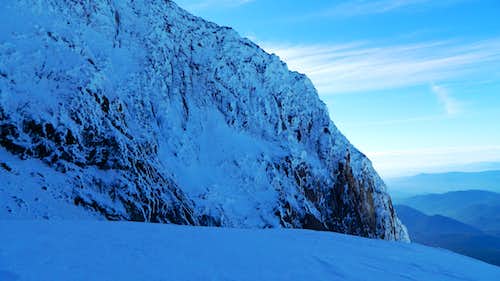 Steel Cliffs: Stunning. I heard plenty of stuff falling as I ascended and descended past them. 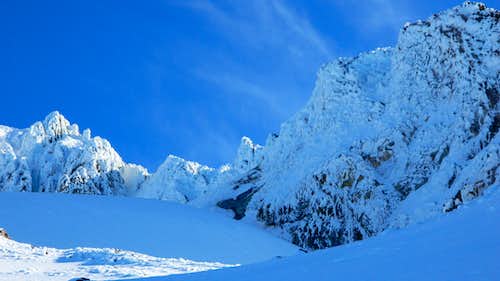 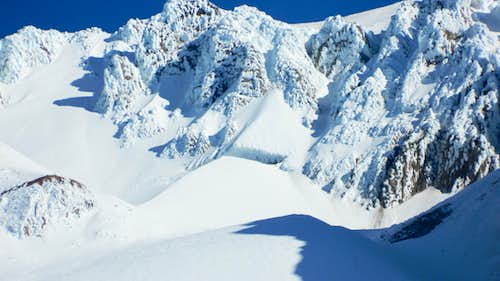 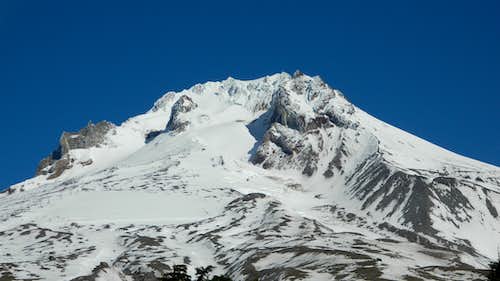 A few views from below: 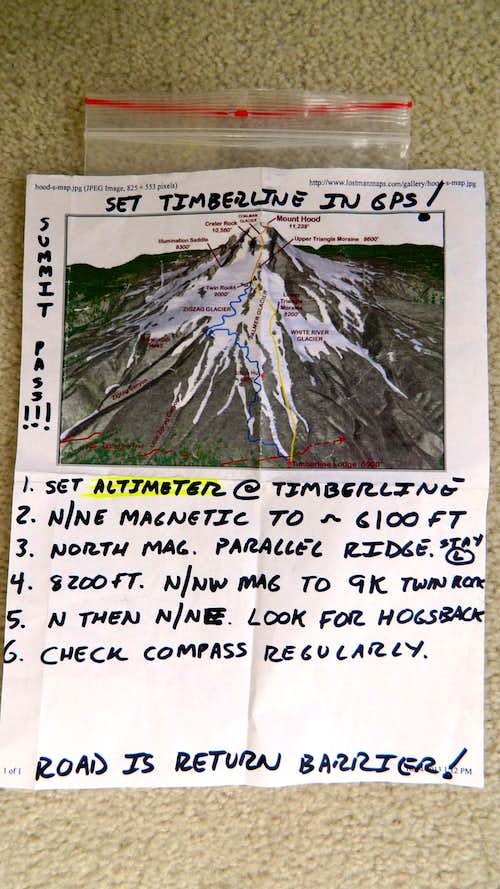 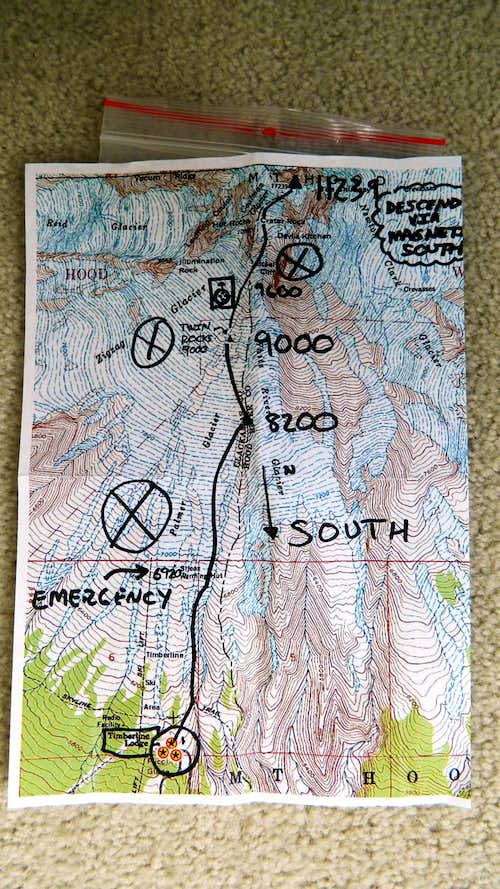 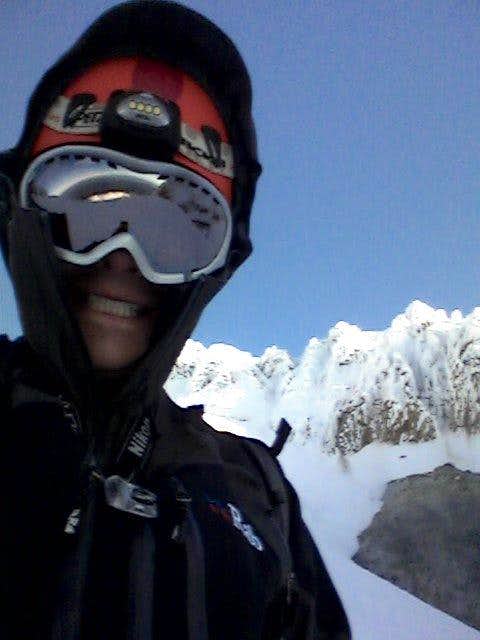 Yours truly, looking like a dork. Thanks for reading!  Sincerely, Chris 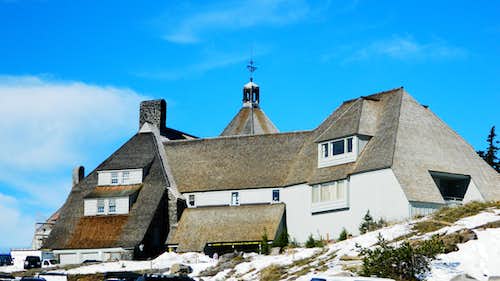 Remember: All work and no play makes Jack a dull boy.