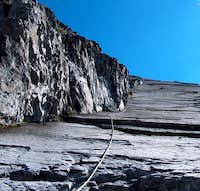 Mount Indefatigable is at the southern end of the Spray Mountain Range located just north of Upper Kananaskis Lake in the center of Kananaskis Country, a provincial park which encompasses over 4,000 square kilometers of foothills and mountains bordering Banff National Park in the central Canadian Rockies. Mount Indefatigable shares the range with several other objectives including: Mount Murray (bolstering the northern end of the range), Mount Black Prince, Mount Warspite and Mount Invincible. Mount Indefatigable was officially named in 1917 after a WWI battleship, typical of peaks in this section of Kananaskis. The first ascent to the summit was made in 1901 by Walter Wilcox. 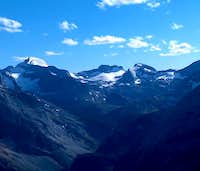 There are four routes up Indefatigable. Two trad rock routes, “Joy” is a 10 pitch 5.5 route and “Shining Path” is a 15 pitch 5.7 route, are on her south flank. Joy was published in the 1996 Canadian Alpine Journal. Mount Indefatigable also includes a published moderate-difficult scramble traverse from the north to south peak as well as a published hiking route to the summit of the south peak.

Kananaskis Lakes is a large camping and trail mecca located at the end of the Smith-Dorrien/Spray Lakes Trail (Hwy 742-gravel) south of Canmore, but is more readily accessed via the paved Kananaskis Trail (Hwy 40). In either case, once on the Kananaskis Lakes Trail (paved), drive to the end of the road at the North Interlakes Day Use parking area. There are restrooms at this location. Pay attention on your left into the marshy meadow for moose. When I climbed the Joy route up Mount Indefatigable in 2005, I saw a large moose in this area.

There are no permit requirements to enter, climb and/or park in Kananaskis Provincial Park. This is active grizzly country however. Take bear spray. The descent trail used for all routes is the Mount Indefatigable Trail and it has been closed many times due to grizzly activity in the area. There have been numerous 2005 trail closures in Kananaskis due to mountain lions and grizzlies. We just had our second serious grizzly attack in the Canmore area for 2005. Therefore it would be prudent to check recent notices posted on the park’s website. The park headquarters is actually located on Highway 40 (Kananaskis Trail) several kilometers south of the Trans-Canada. Notices are posted outside if they are closed. This is a solid information center with good staff and beta.

As with most climbs in the Canadian Rockies, the driest time is from June through September. I did the scramble traverse on Mount Indefatigable in October, 2003 and dealt with a considerable amount of snow on the mountain. I climbed the Joy route in August, 2005 and had completely dry conditions up to the south summit. It is not advisable to climb the trad rock routes in windy conditions. Both are sustained slab. Wind actually blows rocks down from the loose ridge above with little cover below. There are no published backcountry ski routes on Mount Indefatigable, but you could skin up and ski the southeast facing cirque coming out of the north summit. You would not be able to gain the summit or traverse the narrow ridge on your skis.

There are campsites galore in the Kananaskis Lakes complex, backcountry and camper sites. You cannot camp outside of the marked specific camping areas in Kananaskis. Refer to the Kananaskis Provincial Park website for more information regarding camping and/or lodging.

The Kananaskis Provincial Park website is a very thorough park website, including trail conditions or closures, wildlife notices, weather conditions, avalanche conditions, camping permits, whitewater conditions, etc. It is an excellent source if you are going to spend any time here and comparable to any National Park website I have used. Outside of the parks web site, Canadian Avalanche Association is also useful, particularly for winter travel.