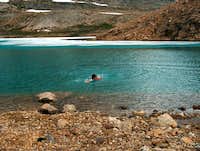 Mount Kerr, not to be confused with the Mount Kerr in Jasper National Park, is located on the south side of Kiwetinok Pass (site of my world renowned Pika expose) at the west end of the Little Yoho Valley in Yoho National Park, one of four connecting national parks making up the central Canadian Rockies. Mount Kerr is part of the President Range and is one of many scrambles that can be combined with a camping trip designed to bag the President and Vice President, a popular alpine objective. 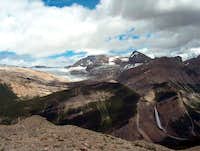 Mount Kerr was named by Ed Whymper after a railroad employee who helped him with his Canadian Rocky visits back in the early 1900’s. It was first ascended by Whymper guided by Bossoney, Kaufmann, Klucker and Pollinger in 1901.

The only published route on Mount Kerr is the easy scramble up its north slope/ridge from Kiwetinok Lake. Since it is such a long hike to gain the Stanley Mitchell Hut or Yoho National Park backcountry camp site #6, it is advisable to combine this objective with the alpine climb of the President and Vice President or other scrambles in the area including Kiwetinok Peak, Mount Pollinger, Mount McArthur and/or Isolated Peak. Mount Carnarvon seems like a stones throw away but cannot be accessed from this area via scrambling.

The Trans-Canada Highway runs from Calgary through Banff and Yoho National Parks on its way to Vancouver. Pass through Lake Louise heading westbound and continue on the Trans-Canada entering British Columbia. Take a right on the Yoho Valley Road right before Field. Drive to the end of the road and park at Takakkaw Falls (1247’), the second tallest waterfall in western Canada. The visitor center for Yoho National Park is located in Field another kilometer or two west on the TransCanada.

You will be required to purchase a national park pass as you enter Banff National Park coming from the east on the Trans-Canada. This pass is good for all four national parks. If you plan many visits to Canadian National Parks within one year, you should purchase an annual pass. There are no permit requirements to climb in Yoho National Park, but all camping is regulated. There is also a backcountry permit required if you plan on spending a night in the backcountry versus the town campsites. This can be obtained via the parks website which is included in the camping section below. Yoho National Park headquarters are located in Field, BC and you will drive through the manned national park kiosks as you enter Banff National Park on the Trans-Canada.

This is active grizzly country, therefore, you should always have bear spray on your person. I advise checking with Parks Canada for any area and/or trail closures.

As with most scrambles in the Canadian Rockies, the driest time is from June through September. I climbed Mt. Kerr in July. It was actually pretty damn cold as I recall. Even so, one of our party skinny dipped amongst the ice flows in Kiwetinok Lake (photo).

The closest conventional camp sites would be the Kicking Horse and/or Monarch campground(s) back east at the turnoff for Yoho Valley Road. The closest backcountry site is Yoho #6 just west of the Stanley Mitchell Hut. This is a great camp site for this scramble and many others that are hard to reach otherwise. It is below the headwall to Kiwetinok Lake at about 6650’. Of course you can make reservations at the Stanley Mitchell Hut as well by clicking on the link above.

You can go on line at Yoho National Park's website to pick a camp site and obtain your camping permit. You will also be required to obtain your backcountry permit which is separate, but can be obtained simultaneously if you plan on camping at a backcountry site like Yoho #6. You cannot camp outside of the marked specific camping areas.