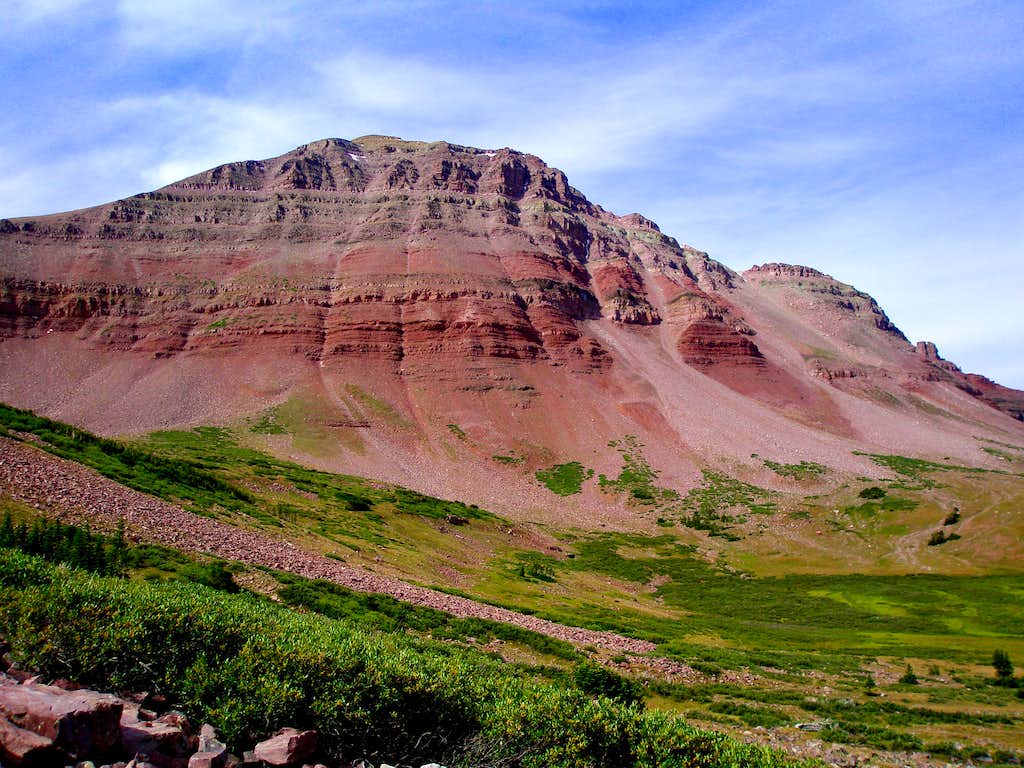 red, or did you add color to it in PhotoShop?

Perhaps it's composed of the same material as
Red Castle Peak ?

It most certainly gets my vote, Zee !!!

Re: Is Lovenia always that

I've never used PhotoShop. I tried once and got frustrated. I used the shadows slider in Picasa which darkens things and makes them not look so washed out. I'm not sure whether this would be considered adding color, but it certainly brightened it up. I did not hit any "make it red button". The Lovenias really are strikingly red depending upon the time of day as are many of the peaks of the Uintas. There is at least one peak however that is strikingly yellow, the appropriately named Yellow Benchmark which seems to glow from every direction it is viewed.

The Lovenias are also distinct from neighboring peaks. They are not merely another bump on a long ridge as are almost all of the Uinta Peaks, including Kings Peak, Utah's high point. Yellow Benchmark also shares this distinction. Although less than 12000 feet, it rises alone from the valley floor and really stands out.

Larry is always jealous when someone else puts up a remarkable picture that has reds in it. It is rumored that he goes to Home Depot and buys red paint when its on sale and then doctors up his own pics. We refer to that process as "Larryized". This is a beautiful picture.

My second new word in as many days! First it was "sheeple" and now it's "Larryized". Thanks Dean.

Guess we can all agree on its beauty.

Hey, nobody ever said that Summitpost can't
be a learning experience.

At least Dean's still maintaing his sense of
humor, which is much needed here on SP.

Very nice shot! Great mountain and area! You were up there recently?

Re: Taken from Red Knob Pass?

Thank you! This picture was taken near the base of E Lovenia to the ENE of Lovenia. Red Knob Pass (to the NW of Lovenia) would be out of the picture on the right side. And yes, I was up there just this past week and didn't see a single person.

Re: Taken from Red Knob Pass?

You just keep 'em coming, don't you? Thanks, as always.

Re: Ho-hum, just another great shot

Thanks for your nice comments Michael!