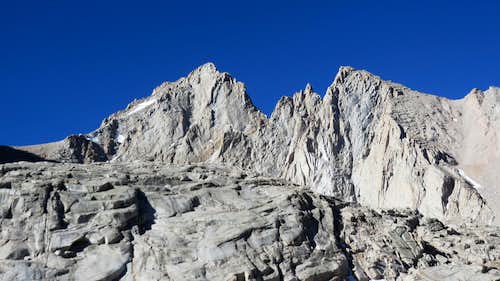 Mount McAdie
I have no idea what made me add Mount McAdie to my list of summits for 2016. Probably it was a suggestion from Summit Post. I am glad I took that suggestion and looked into it. My research revealed that most of the hikers that go up to McAdie also bag Mt. Irvine in the same trip. I actually planed to be even more achieving and also bag Mt. Mallory in the same trip. But that did not materialize. Maybe next year.
A few things I had to consider before the hike. One was the hiking permit. Since the trail to Mt. McAdie goes through the blessed Whitney Zone, I needed a permit to hike that portion of the trail (6 miles from Whitney Portal to Consultation Lake.) (I could go on and on about the Whitney Zone permit hassle, but it would be too much drama and take away from describing the hike.) I was thinking I could just go without a permit since, at that very early starting time, nobody is there to check permits. I could just go up to Consultation Lake, veer left (South) to Arc Pass, go up to McAdie, than come down to Arc Pass, go up to Mt Irvine and from there hike over to Mallory and than straight down to Meysan Lake, on the other side of the mountain (area which is not in the Whitney Zone) and continue down the Meysan Trail to Whitney Portal. I have to apologize here to everyone that doesn't understand what the hell I'm saying here. For the folks that know that area, this loop I just described is easy to understand. Anyway, I ended up getting a permit and avoid any future possible interaction with the law. 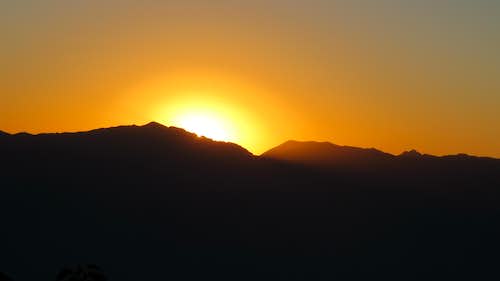 Sunrise
At the beginning of the hike, I had planed to do this loop with the condition that I would be on the summit of Irvine no later than noon. The reason for that stipulation was that, for the next day, I had a hiking permit to day-hike Mt Whitney on Mountaineer's Route. I wanted to avoid of being too tired for that hike. But I only made it up the summit of Irvine at 1:15 PM. Hence, I decided not to take the chance to bag Mallory and be too tired for the Mountaineer's Route, especially that in 2015 I failed it. I had to turn back from the last chimney due to a nasty lighting storm.

From the Whitney Portal to Consultation Lake I followed the Whitney Trail. I was good and tired after five consecutive days of hiking. Therefore, that morning, the speed was not with me. I left the Portal at 5:10 AM. I made it to Consultation Lake (6 miles) at 8:10 AM. Three hours to hike 6 miles are a little slow, especially on such a beautiful and maintained trail as Whitney Trail. But this was the consequence of being eager to get to the top of as many mountains as I could during the short vacation I had. 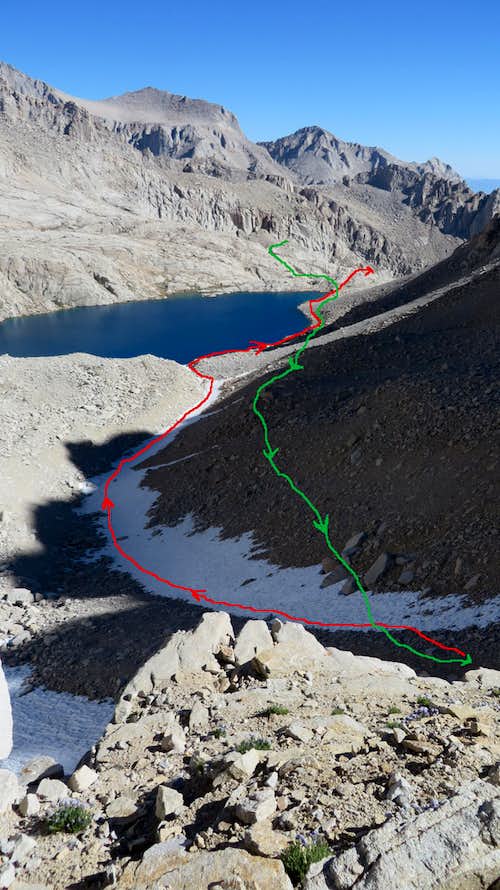 Route to Arc Pass
As I got to Consultation Lake and looked at the Arc Pass, my jaw dropped: the pass had a lot of snow on it, especially on the ascent routes. I instantly got so mad at myself: the crampons, ice ax and trekking polls were comfortably resting in the trunk at the Portal. For a moment there, the thought of just giving up going that way and finding something else to hike, like Mount Whitney, crossed my mind. But, I dismissed the thought and headed towards the pass. That was a good call: from far away things always look worse than they are. Actually, when I got very close to the pass I could see that I could go up without touching the snow at all. Getting to the bottom of the pass was difficult, since I went straight over the moraine. That was difficult and slow going. Only when I came back down, did I realize I should've followed the drainage, which had frozen snow on it and it would've made for an easier ascent. But at the time I was going up, I did not know of any drainage. 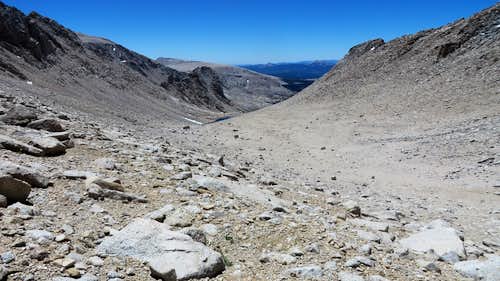 View South from Arc Pass
Getting to the top of Arc Pass was no easy job. Not technically difficult, but as tiring as it could be due to the scree. From the top of the pass, going up the East slope on McAdie was again tiring, this time due to big boulders that have to be negotiated carefully. But that was the least of my troubles. Due to the lack of info on this mountain, I had a very different understanding of going up the summit. My understanding was that one has to find the traverse from the slope, over a chute and onto the South side of the main summit. I knew there was a traverse mid way up the slope, but I missed it. For some crazy reason I thought the traverse was on the left (South-West) side of the South summit, although the main summit was right (North). Checking on the left of the slope I realized that there was no way there was a traverse there, and I got even more confused. I got to the top of the South summit, looped around it on the left (South-West) side, managing a very exposed class 4, and ended up on the West side of this little summit. Being there, I remembered someone mentioned that the old traverse, from the little summit to the main summit, is a down-climb of a "stiff class 3." 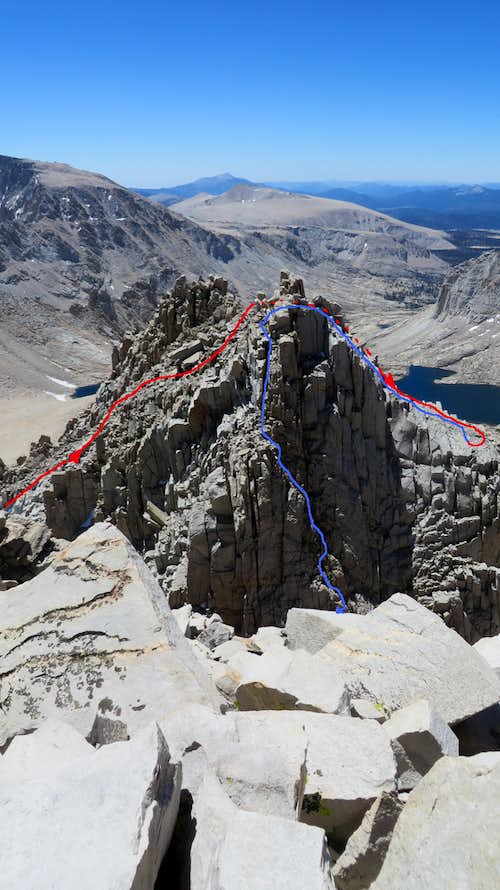 Route on Mt McAdie
I looked toward the notch in between of the two summits and I kind of made out the class 3. But I could not see an easy way of getting to it. I tried to go toward it on this huge, really polished and slippery rock, but its incline was such that I only relied on the grip of the soles of my shoes. There were absolutely no holds. I knew the risk was unnecessary, so I decided to go all the way back up to the little summit and check for another way. Going back to the South side of the mountain I found an easier, not exposed way of crossing, squeezing underneath a pile of big rocks that form the little summit. Once I got to the little summit, I noticed the faint foot trail going down toward the notch. I started down on it and it was indeed a stiff class 3 climb, semi exposed, with few holds, but nothing really difficult.

Once I got to the notch, it was fairly easy to cross the notch, despite a few very big rocks in between the two sides. I made my way up the North summit any way I could, here and there ending up in dead ends. This was mostly class 3, with no exposure. I made it to the summit at 11:10 AM, 6 hours after the start. From the top of McAdie I could easily see the East slope and the place where I should've turned right and made the traverse. I passed up right by it. I wasted more than an hour climbing the wrong side of the mountain. Going down to Arc Pass I used this shorter traverse.

For all intents and purposes, I just want to say that for as proud as I am to have climbed this mountain, I would not want to hike both Arc Pass or McAdie again. It's neither an easy, nor a difficult mountain to climb (at least not for me,) and the views are spectacular (as a 360° I could spot Mts Whitney, Russell, Carillon, Tunnabora Peak, Wotans Throne, Thor Peak, Mts Irvine, Mallory, Le Conte, Langley, Cirque Peak and many others that I could not name, plus very many lakes) but the effort necessary to top this summit would be better used summiting new mountains.

From the top of Mt McAdie I looked at the West slope of Mount Irvine and decided the route up. Of course, going up a slope is not as easy as it seems looking at it. Once I got to the top of this slope, I also realized that from this point of view, it was not easy to identify the summit. Actually, the summit of Mt Irvine is all the way toward the East, one needing to pass by several summits on route to get to it. I made lots of unnecessary attempts toward these summits just to realize half way up each of them, that I was not where I wanted to be. I made the summit of Irving at 1:20 PM.
The weather was absolutely beautiful, but the flies up there made my short rest unpleasant. I looked at Mallory, which was just over there, in plain sight, and somehow told myself that to get to that summit would probably take 1 1/2 hours. That would push my finish time too late into the day and would have shortened my resting time for the next day's big hike.
Hiking Irvine via Arc Pass is a class 2 slog, easy enough for anyone with good hiking endurance. However, I would not recommend going to hike Irvine just for this one mountain. As far as I am concerned, the effort required is too much for the satisfaction it offers. 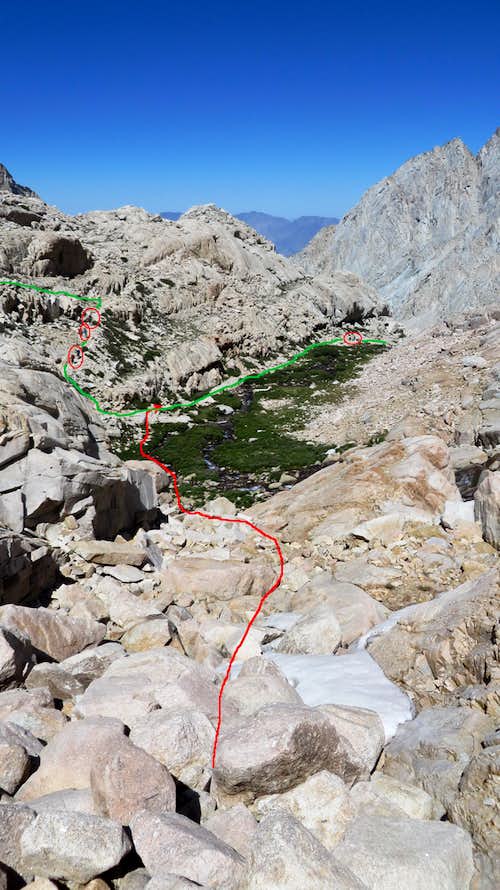 Lone Pine Creek
Going down I really wanted to improvise a little and take a different chute from Irvine, bypassing Arc Pass entirely. I did not have the guts. From McAdie, I eyed a nice chute, but the thought of getting stuck somewhere on the chute and loosing time made me cautious. Therefore, I went down the way I went up. From Arc Pass again, I descended mostly the same way I went up. Only when I got to the moraine, I went directly to the drainage covered in snow and descended on that. By this time in the day, the snow was melting just a little, enough for me to get good footing. I followed the drainage all the way to Consultation Lake and from there I skirted the lake on the South side until I got to Lone Pine Creek.
Then, rather than continuing to the Whitney Trail I hiked along the creek, seeing the trail further down. The cross country along the creek, down the big boulders, proved to be more difficult than I thought. I eventually merged with the main trail. From there down was just uninteresting hiking. I made it back to Whitney Portal at 5:10 PM, twelve hours from the start.