There is no shortage of trails, mountains, parks or open space for those living on Colorado's Front Range. Up north in the Fort Collins area, one such area is Poudre Canyon. This cut serves as Northern Colorado's only viable way to places like Cameron Pass and Steamboat Springs. Otherwise, one would have to go around via I-80, adding hours on to your day. State Highway 14, as it is officially numbered, serves up a staggeringly array of trails, mountain bike trails, hiking opportunities, rock climbing crags, fishing and off-roading. Located 35 miles up Poudre Canyon, far enough to not become swarmed by people on the weekends, is Mt. McConnel; a low, dry mountain that offers solitude, quiet and the occasional view of the surrounding terrain.

Named for the first Forest Rangerin the United States (R.C. McConnel), he served in the Poudre District of Roosevelt National Forest in the early 1900's. Mt.McConnel wasn't added until later into Wilderness designation (1980). In the 1930's, the CCC (Civilian Conservation Corps) to willing peope to work to create a patchwork system of trails in the Cache la Poudre Wilderness of which, Mt. McConnell was included. McConnel is also only 1 of 2 named peaks in the wilderness, the other being Bear Mountain. And at a smidgen over 9,000 acres, the Cache la Poudre Wilderness is Colorado's second smallest.

Honestly, McConnel isn't exactly the most exciting mountain to scale. It's summit is a scattered and broken pile of rocks interspersed in Douglas Fir and Limber Pine. The summit is well below treeline but when up there, it doesn't feel like it. So one isn't treated to the grand alpine views that can be found in places like the Never Summer Mountains or Mummy Range. Most of the available views are of the surrounding wilderness and south into Rocky Mountain National Park. While hiking the trail, the views back down into the canyon are quite good.

The Cache la Poudre river is one of the heaviest maintained and controlled waterways in Colorado. It supplies the Northern Colorado Front Range and Eastern Plains with seasonal snowmelt. Referred to as, 'Minni Luzahan,' meaning swift current in Sioux, it was eventually named Pateros Creek by early white settlers because of a lost Frenchman who was taken in and saved by the Sioux during a blizzard.

The current name of, Cache la Poudre (hidden powder), comes from an old story in 1820 where, again, caught in a bad winter storm, a band of French fur trappers decided to bury and mark their stocks of gunpowder rather than just abandon it to the elements with other non-essential provisions, hence the name.

Due to the High Park Fire in 2012, much of the trail and summit were burned. This was a naturally occuring fire sparked by lightning. The fire lasted 21 days and burned a bit over 87,000 acres. While I was living in Estes Park (at the time), I remember seeing huge plumes of smoke emminate from that direction (north). Many of us were concerned it would jump canyons and head south towards Estes.

From old town Fort Collins (basically the downtown area), head north on 287 for 10 miles to a Conoco gas station. 287 will continue north from this "T" intersection. This Conoco is known as Ted's Place. There's really nothing here except ranch land and the station. But it is named on maps. Grab food and drinks and continue on your way.

Turn left (west) onto Co. 14 (Poudre Canyon Road) and drive for 23.4 miles. Turn left and cross a bridge over the river. Follow the dirt road to the right and look for the trailhead and subsequent trailhead placards. There is a enough room for a few vehicles to park. The campground is also accessed this way albeit a bit further. Refrain from using the campground as a parking place as you'll have to pay a daily fee.

As stated, Mt. McConnel lies within the Cache la Poudre Wilderness. And because of this, all typical wilderness rules & regulations apply. I won't bore you with the long draft but here are the Cliff Notes:

Mt. McConnel is a class-1 trail. There are small cliffs and crags en route to the summit but to my knowledge, no one climbs these. The trail is basically split into three segments: The Kreutzel Nature Trail #936, Mt. McConnel Trail #992 and a short, unmaintained summit spur #992-1.

While hiking to the summit, you'll pass roughly 22-23 interpretive signs/placards outlining the local ecology, geology and wildlife of the area. The surrounding forest is dry and dense. And due to the relitively low elevation, this hike can get rather hot and dusty in the summer. Bring plenty of fluids!

Because the short, summit trail (.15 mile) is an out and back option, it is of course, not necessary. The lower Kreutzer and McConnel trails make for a 3.5 mile loop. Because of the High Park Fire of 2012, much of the lower forest has been burned and subsequently, lost trees. So the views along the lower trail have opened. Burned, downed trees and soot do remain. So if you decide to venture off trail and proceed through the forest, you do stand a chance of coming away sooty and black.

Trail useage despite only beig class-1 is light and sparse. So don't expect too much company.

William Kreutzer was the first official forest ranger in Colorado in 1898. He was only 20 years old!

The Mountain Park Campground, situated just past the trailhead is at 6,600'. There are 55 sites and all have existing fire rings and picnic tables. Some are RV suitable. Many sites have electrical hook-ups and showers are available.

Restrooms are available and road in is paved. Reservations are accepted via phobe at: #970.295.6700. Sites 1-32 accept reservations and have hook-ups. Sites 33-55 are first come, first serve, no electricity.

The season for the campground runs from Memorial Day weekend throug Labor Day. The bridge across the Poudre River is gated in winter. 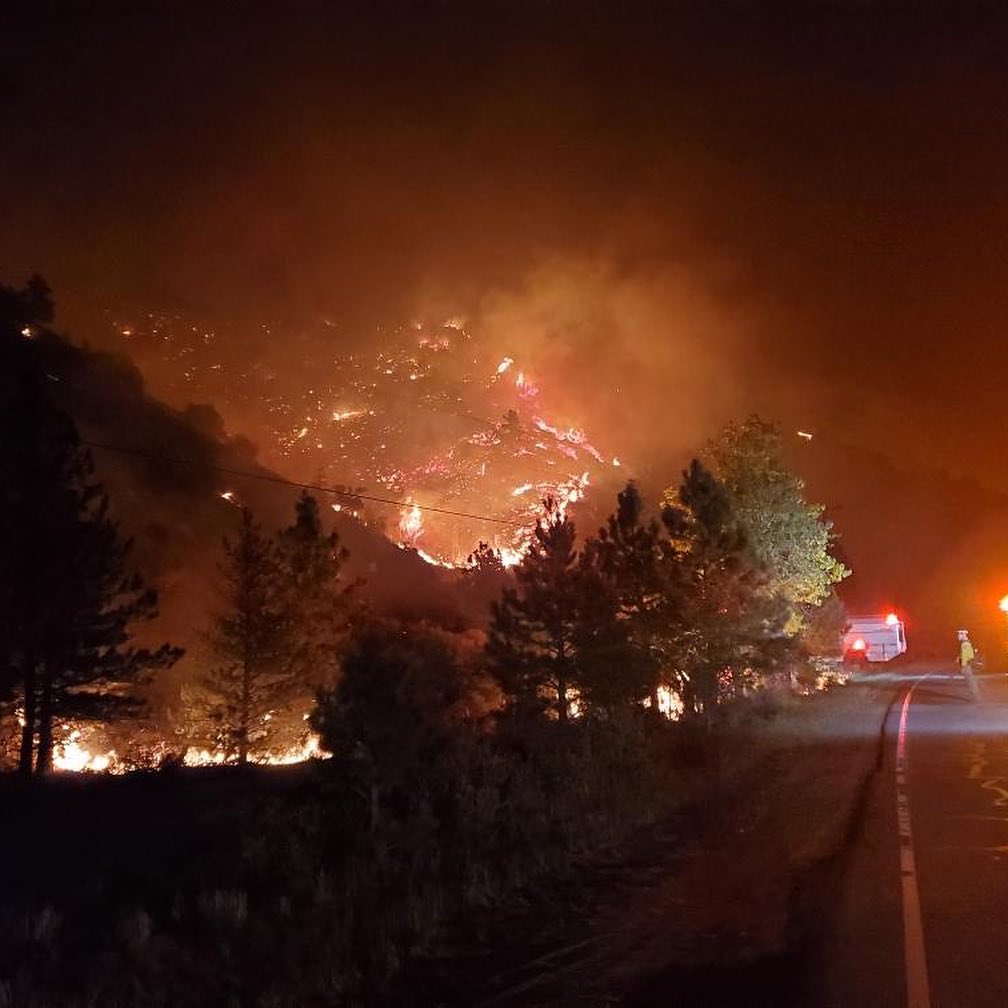 The Cameron Peak Fire which, was first reported on Thursday, August 13th went down in Colorado history as being the largest fire 208,913 acres. The cause of the fire as of February 2021 is still under investigation but is believed to be human caused. If it wasn't for the quick initial response of firefighters, the fire cold have been catastrophically worse. A Loveland fly fisherman who had to be rescued from the fire, told reporters later that he heard a single gunshot shortly before the fire started/got out of control. It burned through the Arapahoe and Roosevelt National Forests in Larimer and Jackson Counties and parts of Rocky Mountain National Park. In fact, all of RMNP was closed due to the potential of the fire spreading southwards into the heart of the Park. The fire burned on 83.4% forest service land.

Most of the terrain burned was in steep, dry and rocky areas. Of course the Douglas Fir and Limber Pine forests suffered as well. During the life of the Cameron Peak Fire, another fire, the East Troublesome started burning to the southwest across the divide. This fire progressed so hot and aggressive, that it actually jumped the Continental Divide and parts combined with the Cameron Peak Fire forcing evacuations of Estes Park.

I make mention of this because the Cameron Peak Fire came within a few miles of Mountain Park and Mt. McConnel. It did burn within the Poudre Wilderness but miraculously, even with warmer than normal summer temperatures and winds exceeding 60 mph on multiple days, this area was spared.

The fire was declared 100% controlled as of January 12, 2021. It was the first fire in Colorado history to exceed 200,000 acres. The cost of battling the fire is estimated to around $130 million of which, Larimer County is expected to cover $5.8 million.