Mount Moriah is the second-northernmost four-thousand-footer in New Hampshire, and the northernmost one on the Appalachian Trail. (Mount Cabot is the northernmost in the state.) Moriah can be considered the northeastern endpoint of the A.T.'s wanderings through the White Mountain National Forest. After Moriah, the trail heads North for Mahoosuc Notch in Maine.

Like Mount Moosilauke, its counterpart on the western end of the WMNF, Mount Moriah does not disappoint. Though stunted trees survive in cracks right up to the summit, the summit and upper slopes offer large areas of bare rock slabs that afford fantastic views in all directions, including of the Presidential Range nearby to the west, the Carter Range to the south, and the Baldface Range to the southeast.

Mount Moriah has a few sub-peaks, notably Middle Moriah (3755') and Shelburne Moriah Mtn (3735'), the latter of which is rocky and offers very good views. Also worthy of mention is Imp Mountain (3730'), a peak located just to the southwest and connected by a ridge, which hosts the Imp Campsite and Shelter, and whose northwest flank has a cliff that is said to project a humanoid leer.

Mount Moriah ranks a lowly forty-first in height out of forty-eight "official" four-thousand-footers, but thanks to its mostly-barren top and its location at the northern edge of the region of highest peaks, I'd rank it among the top dozen viewpoints in the Whites. Reportedly, you can see the Atlantic on very clear days.
How this mountain came to be named after the hill in Jerusalem where David built his Temple (also the spot of Abraham's attempted sacrifice of Isaac) is not clear to me. The name of the Black Angel Trail is probably a reference to the angel sent to destroy Jerusalem (1 Chronicles 21), that halted at Mt Moriah.

Mount Moriah is located about five miles southeast of Gorham, NH. The town's main streets are formed by the intersection of Route 16 and Route 2. From Boston, your best bet is probably to take Route 93 North, and exit onto Route 3 north (at the north end of Franconia Notch) as a shortcut to Route 2 east. Avoid taking Route 16 through Jackson or North Conway, because the traffic can be very slow, both in summer and during ski season. On the other hand, if you've never taken the Kancamagus Highway (route 112) east from Interstate 93, the views are more than worth a few delays.

The trailhead for the northern section of the Carter-Moriah Trail is on Bangor Rd, which leaves Route 2 just east of the Peabody River (0.5 miles east of the official center of Gorham). Access to Bangor Rd near the trailhead is also possible via a footbridge from Mill St off of Route 16.

The trailhead for the Shelburne Trail is on Forest Road 95 , which leaves Route 2 just west of the Maine-New Hampshire border (ie, about two miles west of the intersection of Rte 2 and Rte 113).

The trailhead for the Moriah Brook Trail   (via a bit of the wild River Trail [Warning  - bridge removed! See below]) is the Wild River Campround at the southwest end of Wild River Rd. Wild River Rd leaves Rte 113 about 3 miles south of Rte 2 (just over the border into Maine).

The trailhead for the Stony Brook Trail is on Route 16 two miles south of Gorham.

The summit itself is reached by an un-named spur trail from the Carter-Moriah Trail near its intersection with the Kenduskeag trail. The summit spur consists of perhaps twenty vertical feet of very steep scrambling, followed by a few yards of easy walking.

At the summit, Carter-Moriah Trail becomes part of the Appalachian Trail and continues southward, first over a col to Imp Mountain (where there is a campsite and shelter), then over the rest of the Carter Range all the way to the hut at Carter Notch over nine miles away, passing a few additional trails up from Route 16 to the west or the Wild River to the east. Strong hikers or those planning to camp overnight will want to consider making a large loop or traverse including both Moriah and at least some of the Carters.

The Rattle River Trail (A.T.) provides one of the shortest routes to the summit. It reaches the Kenduskeag Trail near the top of Middle Moriah Mtn by following the Rattle River south for 4.3 miles and 2550 vertical feet. The Rattle River Shelter is located about 1.7 miles along the trail.

The Moriah Brook Trail reaches the Carter-Moriah Trail in the col between Imp Mountain and Mount Moriah, starting near Wild River Campground about 5.5 miles southeast of the summit.  In 2016, the bridge near Wild River Campground was demolished.  The nearest remaining bridge over the Wild River is  at Hastings campground, six miles downstream.  (The Spider bridge farther upstream was removed long ago - don't trust older maps!)

The Stony Brook Trail reaches the same spot on the col from the northwest, providing another fast route from the road to the top. 3.6mi, 2200 ft. 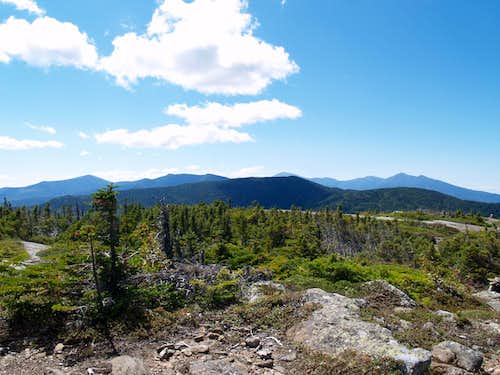 Year-round. Note that rock slabs near the summit may be tricky when icy, though exposure to serious falls is minimal.

Many roads will be closed in winter, including sections of Route 113.

Also of note is the Joe Dodge Lodge at Pinkham Notch Visitor Center on Route 16, which offers lodging and many other amenities year-round.

All campsites are first-come-first-served; reservations are not accepted but Notification is requested for large groups. Campsites are often crowded, call ahead to estimate your odds of getting a spot. AMC Group Notification Line 603-466-2721, ext. 220; shelters@amcinfo.org

The nearest campsite to the summit is Imp Shelter & Campsite, located on top of Imp Mountain. Fee ($8) and caretaker in season.

Allowed (subject to restrictions below), though it's not always easy to find a suitable campsite.

Unless otherwise posted, you may camp:

No camping or fires in designated Forest Protection areas. The list of sites can change from year to year, check with the rangers at Androscoggin: 603-466-2725

One that is of particular interest for climbing Mt Moriah is Wild River Campground, located at the end of Wild River Road near the bottom of the Moriah Brook Trail. Wild River Rd heads southwest from Rte 113 about 3 miles south of Rte 2. No reservations needed.

Two more that are nearby are Dolly Copp and Barnes Field, both on Dolly Copp Road by Route 16 about half a mile north of the Imp Trail (ie, a few miles south of Gorham). Reservations 1-877-444-6777

WMNF campsite details [PDF]
Are they open yet?

Campgrounds are abundant in New Hampshire, consult your yellow pages.

Though lower than nearby Mt Washington, Mt Moriah's summit is fully exposed to bad weather.