Most people who stop at the Lamar River Trailhead are there to look at the bison congregating in the meadows or to sit in hopes of seeing wolves.

If they pay any attention at all to the mountains and ridges just southeast of them, it’s probably to scan them for bighorn sheep.

That complex of ridges and peaks, viewed from left to right from the trailhead, consists of The Thunderer (what an awesome name for a mountain) and Mount Norris.

Mount Norris is almost everything I love in a peak: you can climb it in a day but nevertheless experience the deep wilderness, it is like a wildlife museum but with moving animals and no cases or cages (on the day I climbed this peak, I saw bighorn sheep, bison, deer, elk and grizzly bears), there is scrambling on sketchy rock (it’s not an Absaroka peak if you don’t have to deal with rotten breccia, I like to say), and you get far from the nearest trail. All it was missing, I thought, was a good section of snow climbing.

And the views are phenomenal.

The peak is named for Philetus Norris, the second superintendent of Yellowstone National Park. Whether Norris was the first to climb it or if he ever climbed it at all, I do not know.

Mount Norris, a peak in the Lamar Valley, sometimes called the American Serengeti because of all the large mammals found there in abundance, has a summit and ridges that often have views of the road, and straight-line distance from the summit to the road is only a few miles, but the summit is five miles from the nearest trail, and it is every bit a part of the wilderness that is the Yellowstone backcountry. Despite its relative proximity to “civilization,” the mountain feels far removed from the human world and for all intents and purposes really is not in it at all.

If you head out here, you are almost guaranteed to see some of the large animals that make this area their home, and it is quite likely you will see them at close range, maybe even much too close for comfort. All of these animals are dangerous, and all can kill you. In their fear and admiration of the bears, people often overlook the dangers bison, moose, and even elk can present and get way too close to these animals. It pays to know about these animals and how to behave around them.

This is prime grizzly habitat; in one day, I saw three out here on the ridges, two at extremely close quarters. Carry pepper spray (and have it holstered and within reach, not in your pack) and make noise. Go in a group of three or more if possible; attacks, rare anyway, are even more unusual on groups that size. If you are uncomfortable about grizzlies, this really is not an outing for you, for chances are pretty good that you will see at least one, and you will be far from trails and other people when you do.

Be alert as well for bison. If you get too close to one and it charges you out here, this is really bad news for you because there is just about nowhere to seek cover. Playing dead is only likely to get you trampled, and I have never heard whether pepper spray is effective against bison. The bison like to lie in tall grass, and it is easier to surprise them than you might think. Be especially wary if young are about. The bison like to use the trails. If one is on the trail in front of you, do not be stupid and continue along, expecting it to move. Bison are not as timid as deer, and, in my opinion, they are less timid than bears; frequently, they do not go away when people are near and will continue on their course, even if that course is for a face-to-face meeting. Because they are so large, unpredictable, and so much more numerous than the bears, I worry about bison encounters more than I do bear encounters.

The same goes for moose. Many people will tell you that a cow with her calf is the most dangerous animal in the mountains, and people have been killed by mothers protecting their young from perceived threats. The bulls can also be aggressive during the rutting season in fall.

If you encounter a bison or a moose, stop and let it go its way. Back off slowly if it heads in your direction. Try to get something like a stand of trees between you and the animal.

Elk are typically not as aggressive as the others and, like bears, usually run when people approach, but they will still protect their young (many a wolf has been driven off, injured, or even killed in such circumstances), and bulls during rutting season should be avoided.

Park at the hikers’ trailhead for the Lamar River Trail, 13.5 miles from the northeastern gate of Yellowstone. 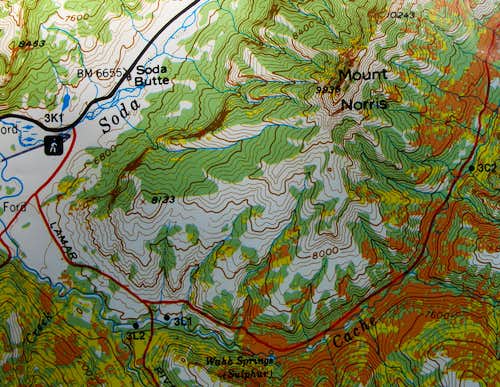 Route Essentials: Approximately 7 miles to the summit, 1.5-2 miles of it on a trail, Class 3 conditions on loose, sharp volcanic rock in the summit area; elevation gain approximately 3400’.

Note: It would be much shorter to approach from the west or northwest, and the route looks more than just possible, but there are two problems: 1) fording Soda Butte Creek, which may not be possible until well into summer (the surrounding area may be very marshy as well), and 2) a steep bushwhack through thick forest.

Hike the virtually flat trail through the scenic valley, watching the cliff bands on your left. When these bands end, start looking for a way you like up the sagebrush-covered ridges. The best place to leave the trail is right around the junction with Specimen Ridge Trail, 1.4 miles from the trailhead. You don’t want to go beyond two miles from the trailhead unless you want to make the day longer and harder.

The route is intuitive the rest of the way. Go over Point 8133, lose a few hundred feet as you drop into and cross a drainage, and continue northeast until the ridge turns north to meet the dark volcanic breccia that comprises the mountain’s summit area. As you approach the rocky area, things may look iffy, but Class 2 route-finding through the rocks is easy. 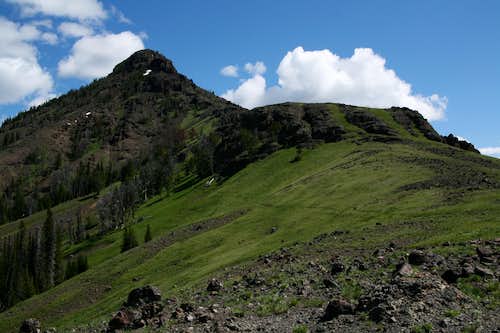 Below the south face of the peak, traverse east (right) around the base of the summit and work your way through loose scree and breccia. There is a lot of petrified wood in this area (illegal to remove), from shards to “logs.” You will also see a lot of rocks with spectacular mineral formations (also illegal to remove).

Eventually, some Class 3 scrambling is necessary to reach the true summit ridge, and then it is an easy walk to the highpoint. Pictures on this page show the conditions and the route I took, but that is not to say that my way was the best or the only way.

From the summit, you can continue to The Thunderer, but it is at least four miles away, making for a round trip of 22 miles at a minimum. You will also have to cross a few false summits. Judging by the view from Norris, I would add that you should expect to encounter at least Class 3 conditions and likely harder than that. 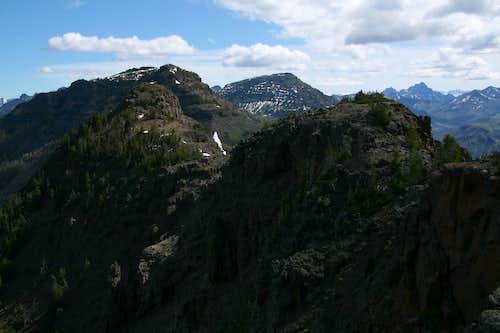 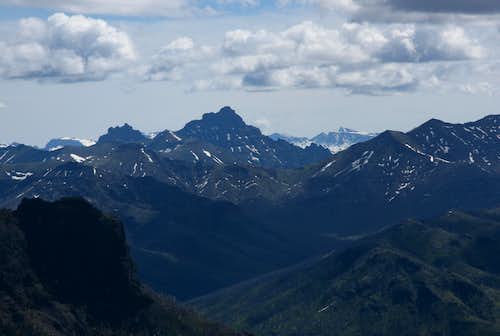 The peak is between Slough Creek and Pebble Creek Campgrounds; both are within 15 miles from the trailhead; Pebble Creek is by far the closer. Sites at both campgrounds are first-come, first-served.

There is lodging about 20 miles west at Roosevelt Lodge; check Xanterra.com for details and reservations. Just outside the Northeast Entrance, there are lodging options in Silver Gate (less than a mile from the park) and Cooke City (five miles from the park).