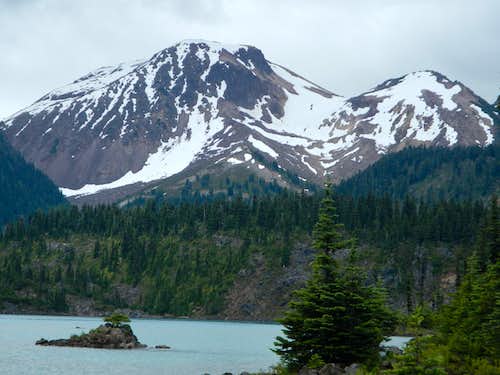 Mount Price Above Garibaldi Lake
Previously called Red Mountain and Clinker Mountain, Mount Price was officially renamed in 1930 for Thomas E. Price a local mountaineer who was part of a team that put up a new route on Mount Garibaldi in 1908, the year after the first ascent of 1907.  Thomas Price was also one of the founding members of the board when Garibaldi Provincial park was formed in 1927.  Mount Price is one of several stratovolcanos in Garabaldi Provincial Park in southern British Columbia.  On the southern shore of Garabaldi Lake, between the towns of Squamish and Whistler, Price is considered an active volcano since the last eruption occurred sometime between 9,000 and 10,000 years ago. It is part of the Garabaldi Volcanic Belt, the northernmost segment of the Cascade Volcanic Arch. The immediate area around Garabaldi Lake is surrounded by volcanic peaks in various stages of glacial erosion. The Table and Mount Garibaldi seen from the summit
The most recent eruption occurred roughly 9000 years ago releasing an immense lava flow from a side vent.  What was left behind by this side eruption is the western sub-peak called Clinker Peak. During that eruption, molten basaltic andesite lava flowed down out of the breached cone, both to the north and to the south, pooling up against the retreating continental ice sheet.  The southern flow moved down toward the headwaters of what is now Culliton Creek, while the northern flow filled in what is now known as The Barrier. The unstable wall of volcanic rock which remained after the recession of the continental ice sheet dammed up melt-water throughout the ages, thus forming the Garabaldi Lakes. 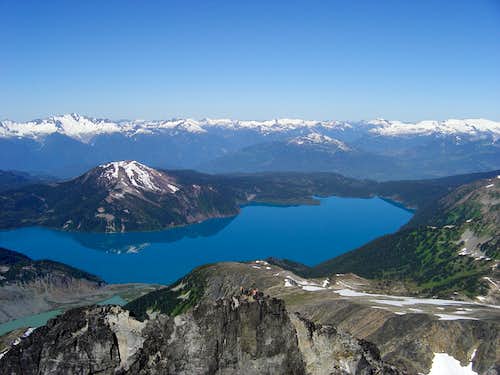 Mount Price and Garibaldi Lake seen from Castle Towers
The Barrier is what is known as a lava dam.  It presents a significant risk to the populations of Squamish and the lower Cheakamus River valley. A partial or total collapse of The Barrier could release a tremendous amount of earth and set free the water of Garibaldi Lakes. The most recent partial collapse of The Barrier took place between 1855 and 1856 and created a large boulder field around Rubble Creek. For this reason camping and residing in the area immediately below The Barrier is forbidden. 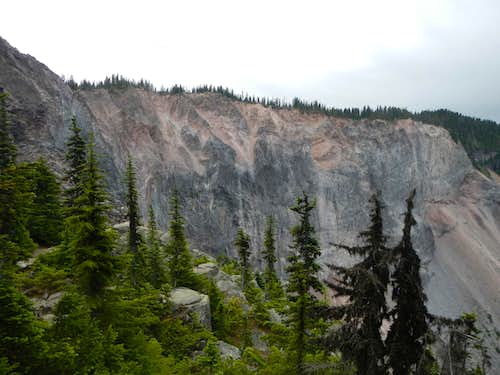 The Barrier
Hiking or skiing to the top of Mount Price is a rather long endeavor for a single day, however in the summer it is not unheard of. The standard route begins below The Barrier and makes use of trails to reach Garibaldi Lake. Official camping is provided by the Provincial Park on the west lakeshore but requires a backcountry permit and payment of a fee. Shared cabins on the lake are also available. From the lake a climbers path follows along a minor ridge through brush and lava boulder fields to the base of the mountain. Scree and snow slopes can be easily ascended to the summit. 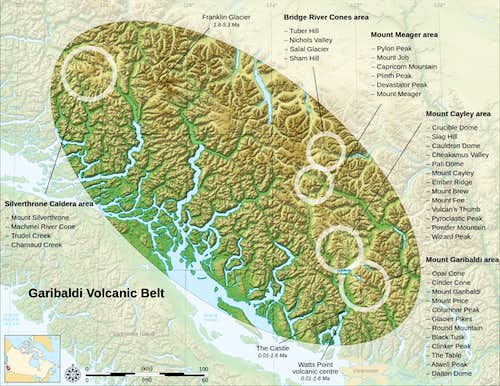 Garibaldi Volcanic Belt
On a clear day, views of The Table, Mount Garibaldi, Mount Tantalus, Cloudburst Mountain, Black Tusk, Panorama Ridge, Gentian Peak, Castle Towers, Mount Carr, Guard Mountain, and Garibaldi Lake down below are truly breathtaking.  You might also consider visiting the summit of nearby Clinker Peak while you are in the area which is a short add-on to any itinerary. 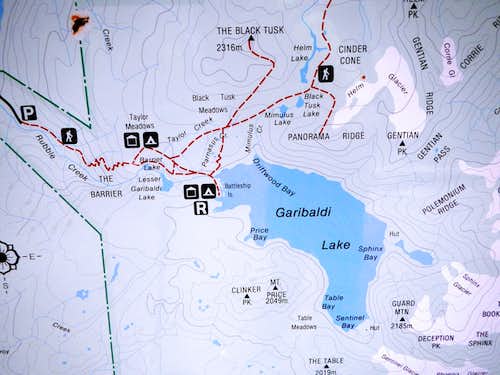 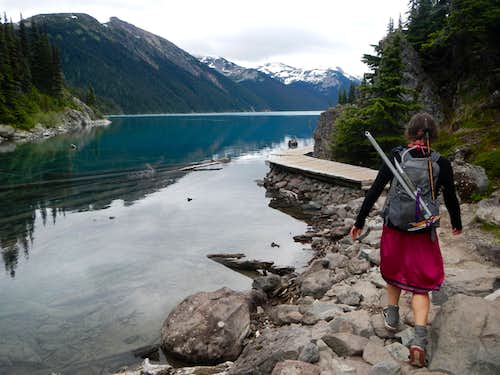 Garibaldi Lakeshore Trail
This route gains nearly 1500 meters and is 30 kilometers round-trip. There is an alternate off-trail route alternative which begins on Brohm Ridge, but it is not any easier and not recommended. 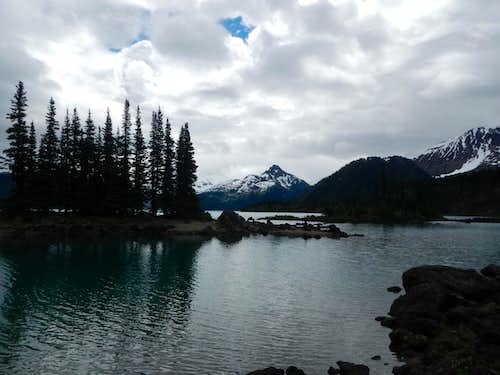 Battleship Islands
From the Rubble Creek parking lot follow the steep trail up past The Barrier to the Taylor Meadows trail junction. Take the right fork to Barrier Lake and continue toward Lesser Garibaldi Lake. At the largest of the three lakes, Garibaldi Lake, turn right at a fork and descend slightly to the Rubble Creek bridge crossing. 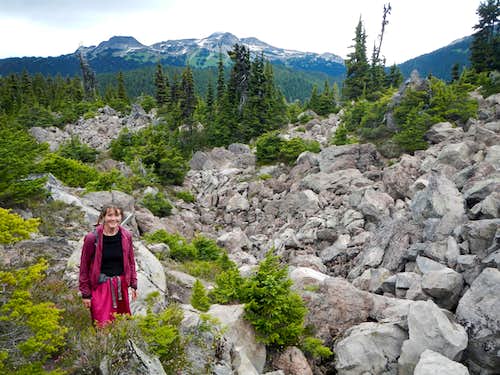 Crossing Lava Boulders
The trail contours the lake-shore and soon comes to the campground. Continue past the campground to Battleship Islands and continue until you come to the rangers boathouse. The Price/Clinker climbers path is behind the boathouse and usually marked with some flagging. 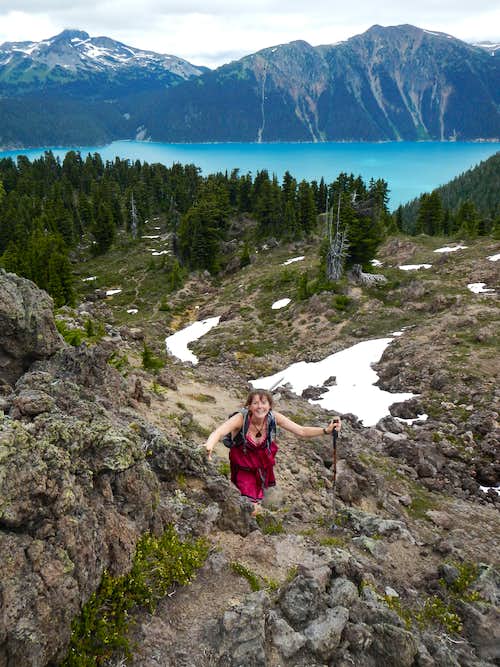 On The North Ridge
The climbers path winds through several boulder fields and can be tricky to follow amid the rocky sections, but is easy to discern for the most part. It will lead all the way to the base of the north ridge which emanates from the high point between Mount Price and Clinker Peak. 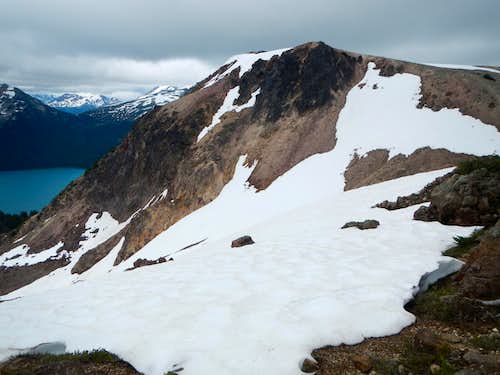 Summit and West Saddle (on right)
Scramble class 2 on this north ridge or ascend easy snow slopes to reach the upper saddle just west of Mount Price. If snow cover is at a minimum, expect some amount of volcanic scree. With lots of snow, be careful of avalanche danger on the upper slopes. From the upper saddle, the summit is a short easy walk.